Undine (Review) – Enchantment Under The Sea (Sort Of) 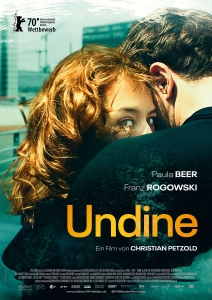 BASICALLY…: A historian (Beer) undergoes a romantic crisis when she falls for an industrial diver (Rogowski)…

This review of Undine was conducted as part of the Dublin Film Festival 2021.

The popular German myth of Undine – which tells the tale of a water spirit who falls in love with a knight, only for things to end in tragedy when he falls for another woman – is basically The Little Mermaid before Hans Christian Andersen came along. It’s easy to see how it inspired the Danish fairy-tale writer’s own version, for its fanciful themes of romance and mythical creatures are as timeless as they come (plus, we got one heck of a memorable Disney movie out of it).

Part of what makes filmmaker Christian Petzold’s new rendition so interesting is not only how it provides a more revisionist angle to the tale, but how it also serves as a sort-of sequel, asking what happens after the water spirit Undine gets dumped by her knight. To add even more layers to its existence, all mention of the story’s fantastical elements are extremely subdued, leaving us to ponder – to slightly paraphrase a famous Queen song – is this real life, or is this just fantasy?

Whatever the case, Petzold’s Undine is a very intriguing movie that offers true fairy-tale romanticism in a very real environment, leaving the imagination purely to the audience.

In this version, set in modern-day Berlin, we first meet Undine (Paula Beer) seconds after she’s been dumped by her boyfriend Johannes (Jacob Matschenz), who has decided that he is – surprise – in love with another woman. Distraught and left with a broken heart, Undine – who here works as a historian who frequently gives talks about the city’s urban development – is soon comforted by the arrival of Christoph (Franz Rogowski), an industrial diver who just so happens to hear Undine deliver one of her lectures the same day as her break-up. The two fall madly in love with each other, in almost a fairy-tale type of manner, but soon one thing leads to another and – for those who know the Undine myth so well – happily ever afters suddenly go out of stock.

Cleverly playing on audience expectations regarding the source material that this is based on, Petzold’s film retains its mystery by deliberately throwing in small hints towards the true nature of Undine and her past, as depicted in this timeline. The beauty of both Petzold’s script and Paula Beer’s illuminating performance lies in how they play their cards so close to their chests that you’re never quite sure what her deal actually is; throughout, there is a wide-eyed curiosity and naivety about her, as though she is still adapting to her new life on the land, but also a tendency to leap towards irrational decisions when things don’t turn out the way she hopes. Maybe she’s crazy, or maybe she’s of another watery world – the point is, it’s deliberately vague, and it leads to some interesting parallels between the fairy-tale constructs we’ve become accustomed to, and the harsh reality that we actually live in, all with a dash of subtle storytelling techniques provided by the writer-director.

Parts of the overall narrative, though, tend to slightly flounder. Because it does harken back to some classic fairy tale concepts, it leaves certain things like character development and more complex human emotions at the door. The moment that Undine and Christoph lock eyes, it’s practically – and very suddenly, especially how mere moments ago she was just dumped by someone else – love at first sight, and before we’ve even had a chance to see them grow into their relationship they’re deep in each other’s arms and barely able to let go of one another while walking together. You could make the argument that this is all in keeping with the original folk tale, but in a modern and revisionist setting such as this, certain archaic things such as this seem a bit silly. There are also multiple points where the movie feels like it’s about to end, only to go on for another five or so minutes, which even for a movie that feels like a reasonably quick sit – at around ninety minutes, it goes by pretty fast – tends to last a lifetime.

While it’s perhaps got one foot forward with its update of this classic story, but also one foot firmly in the trappings of its fairy tale origins, Petzold’s Undine has enough of a magical touch to feel like a fresh new take that goes one step further with its vague ties to either fantasy or reality. Whether or not the Undine of this rendition is actually of the water, she swims elegantly to avoid completely sinking.

Undine is an intriguing new update on the classic German fairy tale, which cleverly plays with audience expectations about what is real and what is fantasy, and benefits from writer-director Christian Petzold’s deliberately vague intentions as well as Paula Beer’s illuminating lead performance, although its occasional pitfalls lie in its subtle sticking to fairy tale tradition.

Undine will be available to rent exclusively on Curzon Home Cinema from Friday 2nd April 2021.