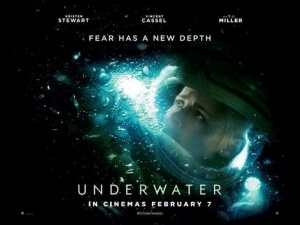 BASICALLY…: When a large earthquake devastates an underwater base, the crew must survive the mysterious creatures attacking them…

A movie like Underwater is one that only exists to remind you of the far better movies it is constantly borrowing from, and after it’s served that sole purpose it’s pretty much gone from the memory bank.

You can figure out a lot of this movie’s heavy inspiration just from reading a brief plot synopsis; an underwater drilling base 7 miles beneath the surface is suddenly attacked and badly damaged, causing the surviving crew members – among them Kristen Stewart, Vincent Cassel, T.J. Miller, Jessica Henwick, John Gallagher Jr. and Mamoudou Athie (I know their characters all have names, but they are so unimportant that I’m just referring to them by their actors’ names) – to not only try and make it out alive, but also avoid becoming the next target for the monstrous beings waiting for them around nearly every corner.

Right away, you can spot the blatant similarities between Alien – right down to the fact that Kristen Stewart is playing an Ellen Ripley-type, even spending a large chunk of the third act in her underwear – and other horror survival movies like The Descent, Cloverfield and The Abyss, in addition to clearly borrowing unused designs from H.P. Lovecraft to create the monster in this movie, and on top of that this creature also seems to operate on movie serial killer logic (jumping from the dark, hiding around corners etc) which means further lending to the scare department from stuff like the Friday the 13th films. It’s an extremely derivative script, with virtually no voice of its own outside of borrowing from much more successful movies of its type, and even then it doesn’t do them nearly half as well as its predecessors.

Even if you took away the obvious comparisons, the movie is pretty flat and empty. It’s nearly right away that the main survival situation comes into play, which means we have had no time to get to know or care about any of these people, and we are introduced to them as we begin to find them amidst the destruction that the opening carnage creates, instead of seeing what they were like before everything starts falling apart so we can get a hint of some of their personalities. The closest we get to actually caring about one of these people is with Kristen Stewart’s character, because as she did with Seberg she gives the lacking material far more life and dedication than it probably deserves, and she is legitimately good in this as a result. Everyone else is a blank archetype, despite these actors clearly trying as hard as Stewart to make something out of the script, but none of them comes out quite as obnoxious and completely out of place as T.J. Miller, who is not only ladled with the comic relief role – and not a particularly funny one at that – but the way he acts and delivers his lines makes him feel like he’s somehow wandered from the set of a raunchy frat-boy comedy and onto this intense survival horror movie. Other than sheer annoyance, you don’t feel anything for Miller or many of the other cast members, because their characters leave absolutely no impact nor a reason to care about them making it to safety by the end of it.

There are times, though, when the movie does invoke a slight feeling of dread and intensity, particularly most of the scenes where the characters have to venture out onto the seabed in order to get to their next checkpoint (well, the suits they’re wearing are strikingly similar to the ones in video games like Bioshock and Mass Effect, so we might as well start using video game terms). Those scenes, for the most part, do build up some serious suspense, because the surrounding darkness on top of the fact that they are so far under the surface that the pressure could cause them to implode at any moment does add a level of uneasiness to the moment. However, many other sequences tend to go for the stock jump-scare tactics and are filmed so shakily that you start to wonder what is actually going on in the scene, rather than be sucked in by the horror of the moment as it wants you to be.

Because the film wasn’t derivative enough, it even finds time to shoehorn in an environmental message, with one character just blatantly spelling it out for everyone what the social commentary is and how it connects to the situation (hint: they’re on a drilling ring miles below the surface). Opening and closing montages spell this out even further, leaving you longing for the subtlety of James Cameron’s Avatar when it comes to environmental messages; of course, it is a topic that is worth paying attention to, but when movies like this try and force it upon audiences who just want to have a good time at the movies, then it kind of puts a sour patch on their enjoyment when they’re suddenly reminded that our planet is being screwed up royal by us and us alone. Imagine if you went to see a fun movie like Shazam! or Baby Driver, and then in the midst of a pretty entertaining action sequence they just suddenly stopped to look at the camera and remind the audience that 9/11 still happened; kind of puts you in an uneasy mood all of a sudden, doesn’t it? Well, that’s what this movie makes you feel.

Though, granted, it’s not like this movie was really all that fun to begin with, except when thinking about all of the other, far better movies that it is blatantly ripping off.

Underwater is an extremely derivative and creatively empty horror survival movie that borrows from so many classic examples of the genre, from Alien to The Descent to Cloverfield to The Abyss, and adds almost none of its own voice to the material, which strands most of the actors with lacking dialogue and thin characters that aren’t worth caring about, along with a shoehorned-in environmental message that’s about as subtle as a wave of water to the chest.

Want to decide what the movie’s like for yourself?
Check out Underwater showtimes in London
via