Under The Silver Lake (Review)

Under The Silver Lake (Review) 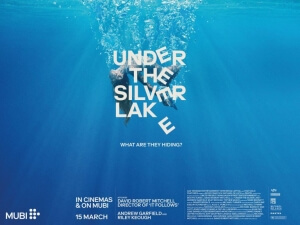 BASICALLY…: When his beautiful new neighbour (Keough) suddenly disappears, slacker Sam (Garfield) investigates but finds himself deep within a large and bizarre set of conspiracies…

One common comparison you’ll probably see a lot in reviews for David Robert Mitchell’s Under The Silver Lake is to Richard Kelly’s notorious bomb Southland Tales. Both movies were follow-ups to critically-acclaimed cult hits – for Mitchell, it was It Follows, while for Kelly it was Donnie Darko – and both were extremely ambitious, if rather long, neo-noir thrillers set in Los Angeles that went in completely surreal directions all over the map; needless to say, it’s not hard to see why Under The Silver Lake is being compared endlessly to that other film.

Here’s the thing, though; while Southland Tales is an unholy nonsensical mess of self-indulgent pretention that was utterly embarrassing for everyone involved and was so uninteresting that anyone with a brain would never revisit under any circumstances, Under The Silver Lake is nowhere near as incoherent – in fact, it’s a rather fascinating movie to unpack, even amidst its occasional smugness and unexpected insanity.

The film, as mentioned earlier, is set in contemporary Los Angeles, where Sam (Andrew Garfield) is a deadbeat unemployed slacker who’s about to be evicted from his apartment after failing to pay his rent, yet he continues to spend his days doing nothing except spying on his neighbours and reading conspiracy theory zines. One day, he meets his beautiful new neighbour Sarah (Riley Keough), but after a sweet evening with her he finds that she has suddenly disappeared, and searches around the city for answers about where she’s gone.

From there… well, you might want to buckle up, because this movie takes you on quite the journey. At first, you think you’re going to get a straightforward mystery, but you’ll quickly discover that nothing about this film comes anywhere near close to the definition of “straightforward”. In the words of Stefon from Saturday Night Live, this movie has everything: dog killers, goth bands, escort services, underground bunkers, wealthy daredevil tycoons, Kurt Cobain’s prized guitar, and we haven’t even gotten to additions that are even crazier than those things. To say it’s an extremely weird ride would be to undermine the utter madness you’re witnessing on-screen, and you’re left feeling not entirely sure whether to call foul on it, or respect the undying hell out of it; for me, it was certainly the latter. Watching it, I was constantly fascinated by all of the weird directions this movie was leading me down, and it even reached a point where I felt nothing but incredible admiration for the sheer ambition that Mitchell has put on display here. Whether or not you end up liking this movie, if nothing else you have to respect the unholy crap out of all these insane ideas he’s mixed together to form one huge pile of surreal David Lynch-esque madness.

Lynch was clearly a major inspiration for Mitchell on this film, and his influence shines through on multiple occasions, especially when you put it next to a film like Blue Velvet (a much better movie to compare this one to than Southland Tales, by the way). Like that movie, Under The Silver Lake relishes in its film-noir/mystery roots, and you can tell that it does from the way that Mitchell and cinematographer Mike Gioulakis use lighting and certain camera angles to replicate the look and feel of a similar film from the 40s or 50s – when Andrew Garfield first meets Riley Keough, she is shot exactly like a classic femme fatale shot from that era of film – not to mention a breathtaking orchestral score from Disasterpiece which intentionally invokes memories of Bernard Herrmann’s legendary score for Alfred Hitchcock’s Vertigo. It feels very much like a film made by someone who really admires those kinds of classic film-noirs and has done their very best to bring it into a more modern backdrop, albeit with an increasingly surreal style that introduces concepts and executions you would never expect to find in a film like this.

The story is undoubtedly bizarre, and there are often things that are introduced which don’t really come back into play later on, but it’s constantly intriguing and massively unpredictable that you’re curious enough to see it through to the end; even though it’s over two and a half hours long, you never feel bored by any of it, since there is so much to keep your mind busy with whilst you’re watching it. Add on top of that a fun lead performance by Andrew Garfield, as well as the fact that it’s an extremely well-made and often gorgeous-looking film, and you have yourself a movie that you can happily sit back and let insane stuff happen in front of your eyes, no matter how weird it gets.

Not everyone is going to like this movie; in fact, there are probably a lot of people who have already seen it and downright hate it. I completely understand why anyone would not like this movie, as it is so weird and out-there that it’s easy for anyone to get confused and annoyed with it; for anyone else who may be more into this sort of surreal Hollywood feature, then you’d better make sure you get a chance to see Under The Silver Lake, because chances are you’ll come out of it with a whole new level of respect for this filmmaker and his wild imagination.

Under The Silver Lake is an endlessly bizarre and surreal mystery that will not resonate with many viewers due to its increasingly strange plot and style that takes heavy cues from David Lynch, but those that stick with it will be left with a fascinatingly weird odyssey that leaves you with a huge amount of respect for writer-director David Robert Mitchell.