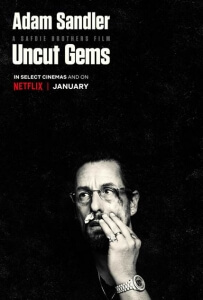 BASICALLY…: A New York jeweller (Sandler) comes into possession of a rare opal which he seeks to sell and pay off his debuts, but nothing goes according to plan…

Watching a movie as intense and stressful as Uncut Gems is far more uncomfortable if you’ve got a massive head-cold – which I found out the hard way during my second viewing of Benny and Josh Safdie’s anxiety-inducing drama.

Going into this film, I had a massive headache, coughing and sneezing so much that it legitimately hurt after a while, and no paracetamol on hand to numb the pain. I was merely unwell when I went into this movie; by the time it finished, I felt like I was about ready to die. The amount of stress that this movie piles onto you is unbearable, especially when your head is already in a lot of pain, so I wasn’t as taken by it as I was when I first saw it back in October – when it debuted as the Surprise Film at the BFI London Film Festival – but again, that’s only because of the raging illness brewing inside my body at the time.

The film sees Adam Sandler play Howard Ratner, a New York jeweller with a severe gambling problem and who owes money all over town. He’s quite the screw-up, having gotten into financial problems left and right, and is on the verge of getting divorced from his wife (Idina Menzel) while he fools around with his younger mistress (Julia Fox). He sets his hopes and dreams on a rare opal he receives from an Ethiopian Jewish community, which contains a collection of uncut gems he believes is worth millions of dollars, but a series of bad decisions begin to throw his plans into jeopardy, and a large chunk of the film is focused on Howard trying to right his wrongs while simultaneously creating dozens of new wrongs.

This is a film that, from the very opening, almost never lets up, with overlapping dialogue played against an overwhelming synth score by Daniel Lopatin, so already you are having a difficult time trying to comprehend the situation at play, in the first of many instances where you are facing severe anxiety just from piecing together the puzzle pieces. The Safdies are extraordinary filmmakers in that respect, seeing how they are able to get naturalistic performances out of their actors while also keeping things going at such a tightknit pace that you feel overwhelmed by the halfway point. In addition, they have achieved what no other filmmaker has yet done and gotten a legitimately awards-worthy performance out of Adam Sandler, who is absolutely fantastic in the film as the deeply flawed protagonist who you are constantly rooting for, even when he makes some very dumb decisions throughout the course of the movie. Sandler has proven in the past that he has the ability to be a powerful dramatic actor, despite the likes of Jack and Jill and I Now Pronounce You Chuck & Larry suggesting otherwise, and this is by far his best work to date as he really plays into his character’s scummy but ambitious nature almost a little too well.

The film, when you step back and take a look at it, is a strong experience, but you really need to be in the right mind frame to actually become engrossed in it. When I first saw the movie last year, I remember being a lot more invested in the uncomfortable pace that it set itself, and my judgement at the time came from being in a reasonably healthy state of mind. Seeing it this time round, with the massive head-cold that I had, I found that the experience was a lot more difficult as I was constantly trying to take everything in while also dealing with a numbing headache, something that is not recommended when you too watch this movie. I also find that when I’m as unwell as I was during this screening, time goes by a lot slower, and I really felt the 135-minute runtime on this thing. Even having seen the film before, I was wondering where we were at certain points in the story, and I was starting to get a little restless in my seat as the movie kept going and going, to a point where I was starting to attract the attention of other members of the audience. To say it was numbing in all the worst ways possible is an understatement.

But again, do not take that as a negative reaction to this film; it is still a very good movie that does an excellent job at keeping you on your toes at all times, with a relentless energy that most other filmmakers would struggle to replicate. If anything, I am glad that I saw this movie again in the state that I was in, for I now know that this is a film that you really have to be mentally prepared for. There is so much happening on screen and with such little time to comprehend it before the next scene happens, that being in the right frame of mind is really going to help you focus and absorb the chaos. If you are at all unwell or are prone to anxiety attacks, then you might want to hold off on seeing this film, because having either will certainly not help your overall experience, no matter how much you want to enjoy it.

So, when this movie finally hits Netflix at the end of the month – or even next week, when it begins showing in a select few cinemas – do check it out because it’s an experience worth visiting and an Adam Sandler performance that you will never, ever forget. Just be sure that you’ve not picked up any bugs before watching it.

Uncut Gems is the kind of movie that you really need to be in the right frame of mind for, with its overwhelming intensity and relentless anxiety-inducing filmmaking, but if you stick with it then you will be rewarded with an unforgettable experience with a career-best turn by Adam Sandler.

Want to decide what the movie’s like for yourself?
Check out Uncut Gems showtimes in London
via