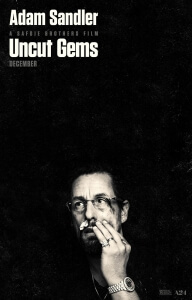 BASICALLY…: A New York jeweller (Sandler) must find a way to pay off his outstanding debts before it’s too late…

This review is of the cut shown at the BFI London Film Festival in October 2019 – it is currently scheduled to debut on Netflix on an as-yet unannounced date in January 2020.

Asking us to spend an entire movie by the side of Adam Sandler at first seems like an impossible task. We are so used to seeing him star in “comedies” that target the lowest common denominator that even some of his stronger dramatic work in films like Punch-Drunk Love, Funny People and Reign Over Me end up being tainted by his overall image as an obnoxious man-child.

But his work in Josh and Benny Safdie’s Uncut Gems simply demands our full attention. It’s a Sandler performance that we’ve never seen before, not even in those far more acclaimed other movies, and it’s one where he finally gets to put some of his more irritating tendencies to good use, in a film that will have you as consistently on the edge as his character undoubtedly will.

Sandler plays Howard Ratner, a Jewish jeweller in New York who owes a significant amount of money to people all over town, mostly due to his gambling addiction. He is also estranged from his impatient wife (Idina Menzel), is shacking up in an apartment with his younger mistress (Julia Fox), and irritates nearly every single person he comes across. When he comes into possession of some uncut Ethiopian opals, he thinks he’s got the material for a score to end all scores… but he constantly makes one bad decision after another, and soon he finds himself negotiating with mobsters, NBA players (including Kevin Garnett playing himself) and even The Weeknd just before he makes it big (the film is set in 2012) in an increasingly stressful attempt to finally get the money he deserves.

Just like in their previous film, the Robert Pattinson-vehicle Good Time, the Safdie brothers have made a film that’s all about the dumbest, most illogical mistakes that a person can make. Throughout the entire movie, Sandler’s Howard does and says things that only a complete and utter moron would do and say, and half the time you’re just about ready to yell at this guy for making the stupidest decisions that no person with a brain in their head would even think about doing. The thing about this movie, as opposed to all the other times that Adam Sandler has played a loud and annoying idiot, is that it makes complete and utter sense that someone like him would do these things; Howard is introduced as a colossal screw-up from the first time we meet him (which is, incidentally, unconscious as he’s getting a colonoscopy), with characters openly expressing how annoyed they are by his very presence, and always finding a way to dig himself deeper into a hole of his own making.

Neither Sandler nor the Safdies make you want to feel too much sympathy for this guy, because he is a lot to handle, but the filmmakers (along with co-writer Ronald Bronstein) do their best to make him feel human enough that you can see that this guy, as repulsive as he can be at times, is a believable person who could actually exist in the real world. None more so, however, than Sandler who completely throws himself into the harsh realms of his character and even makes effective use of his trademark screaming, delivering a performance that Al Pacino would have done around the same time he did Dog Day Afternoon. It’s not just the best performance of his career, but it’s one that could – in all seriousness – throw him into the awards conversation. With all the craziness that’s going on in our world right now, the phrase “Academy Award-nominee Adam Sandler” suddenly doesn’t seem so far-fetched.

Whether Academy voters will warm to such an excruciatingly stressful experience, though, is a story yet to be told. The Safdies always make you feel as though you’re about to have an anxiety attack in this film, as scenes are shown with layers and layers of overlapping dialogue and an overwhelming musical score (provided by Daniel Lopatin) that’s intentionally mixed to make you feel completely discombobulated. Quiet downtimes in this movie are as rare as the titular gems themselves, as things are always happening to a point where it starts to become too much, but it’s the strength of Sandler’s performance – as well as morbid curiosity as to what the next terrible decision he makes is going to be – that even in its busiest moments the movie completely sucks you in.

If you enjoyed Good Time, this movie is like that but on steroids; everything is amplified and way more exaggerated, but not in any kind of indulgent way. It’s more to create a stressful, anxiety-inducing world with a lead character who’s perhaps the least qualified guide to take you through it all, and while it certainly won’t be to everyone’s tastes, it’s a heart-stopping, thrilling, and even transformative experience that will change the way you look at an actor who’s become so easy to hate. I sincerely hope that Sandler takes the acclaim he’s been receiving for this film to heart, and finally put aside his childish safety net in lieu of something much more mature, risky and utterly challenging.

Uncut Gems is an anxiety-inducing crime thriller where you’re left to experience a harsh environment with a lead character who’s intentionally dumb and insufferable, but it’s held together by the Safide brothers’ impeccable filmmaking skills as well as the greatest Adam Sandler performance ever put to film.