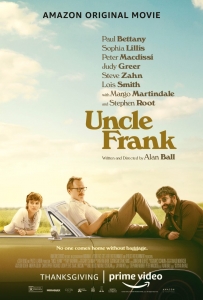 BASICALLY…: A gay literature professor (Bettany) reluctantly returns home with his teenage niece (Lillis) and his partner (Macdissi) for his father’s funeral…

Not even 24 hours after the release of Hillbilly Elegy comes along yet another movie that deals with dysfunctional family relationships in the conservative South, and to almost nobody’s surprise Uncle Frank is the much better film.

Written and directed by Alan Ball – the Oscar-winning screenwriter of American Beauty, and the creator of shows such as Six Feet Under and True Blood – the movie covers similar ground that Ron Howard’s film attempted to in vain, from stern and often cruel parenting to backwards attitudes about certain societal norms. The difference is that Ball’s film takes a much more sincere, heart-warming and meaningful approach that carries a particular weight because you actually do spend time getting to know and understand its characters, and just as importantly it doesn’t pander to its audience with basic stereotypes.

It’s part of what makes Uncle Frank not just the far superior slice of southern-fried drama, but perhaps also one of the most effective and loving films of the year.

Set in 1973, we meet young Beth Bledsoe (Sophia Lillis) who comes from a South Carolina family where nobody seems interested in her, except for her caring and supportive uncle Frank (Paul Bettany), a professor at New York University. After she turns eighteen, Beth begins attending that very college – only to discover that Frank is actually gay, and has secretly been living with his lover Wally (Peter Macdissi) for many years. While Beth is unfazed by her uncle’s sexuality, the two of them receive news that Frank’s father (Stephen Root) has suddenly died, and that they must return to the South Carolina town they left behind for the funeral. Much to Frank’s reluctance, Wally ends up following them down, which leads Frank to confront some nasty truths about his past and, most significantly, his relationship with a family that won’t accept him for who he is.

Perhaps I am biased towards an Alan Ball script, because American Beauty ranks high on my personal list of favourite movies, but Uncle Frank feels like a truly special movie full of love, compassion, anger, sadness, and lots of other small emotions running rampant. He is careful with his characters, allowing them enough room to breathe and have normal conversations while still being unafraid to show off some of their heavy flaws. His scenes will flow gently into one another with a consistent tone and a mellow, breezy attitude that makes you feel as though you are having just as pleasant a trip as our main leads. Most of all, he makes you care about everything he has to offer here, not just the characters but also the drama and the dialogue, right down to even the most minute of set designs. Ball’s script and direction breathes so much fresh life into each and every one of these things that it leaves you with an exceptionally warm feeling inside, in a genuine sense where you feel as though it is a true epic on a considerably small scale.

Another reason why you end up caring so much for these characters is because the performances themselves are quite stellar across the board. Character actors from Margo Martindale to Steve Zahn to Judy Greer all have very memorable moments and line deliveries that add to the heart of the piece, while Sophia Lillis continues to build her firm post-It career with a self-assured turn that’s sweet but also mindful. The film, though, belongs to Paul Bettany. In what might well be a career-best turn from the actor, Bettany commands the screen with charisma and sophistication, making you instantly see why people are so easy to warm to him, but also a hidden layer of grief and melancholy for his troubled past, which he tries to keep buried by numerous small bottles of alcohol, much to the equally-loveable Peter Macdissi’s chagrin (in an example of both understated performance and considerate writing, it’s heavily hinted that he has a tumultuous past with alcoholic lovers, and refuses to let his lover go down the same path). Bettany alone is why you should at the very least give this movie a chance, because he is so good in this that it’s almost a crime that he’s inevitably going to be ignored by most awards pundits for the upcoming season.

Overall, it is a very human film, full of heart and lots of light moments to please even the most cynical of viewers. The dialogue is strong, the characters are compelling, the performances are excellent, and it even has the decency to tackle some rough subject matter head-on in a way that doesn’t alienate or belittle any of the people involved in it. This is a film that treats nearly everyone with respect and grace, leaving no character without a sense of humanity, or at least feeling like they could be a real person living in this time period. It certainly moved me by the time it ends on a happy and uplifting note, if only because after a year of crappiness it’s just nice to see people being good and decent to each other, without much judgement or any real hostility which we’ve seen far too much in 2020.

It might be one of my favourite films of the year in that regard, and by far and away a better movie about Southern family values than Hillbilly Elegy.

Uncle Frank is a lovely and heart-warming film about family life in the South which achieves a far greater sense of characterisation, drama and sincerity than the similar Hillbilly Elegy, but even on its own with some stellar writing and excellent performances, particularly from a career-best Paul Bettany, it’s grand enough to count as one of the year’s best.