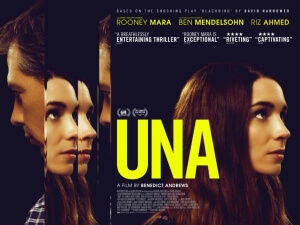 BASICALLY…: A young woman (Mara) tracks down and confronts a much older man (Mendelsohn) who, when she was much younger, entered in a sexual relationship with her…

So often in child sexual abuse cases, the predator is usually doxed and punished, yet nobody ever really seems to give much thought to the victim in the long-term. Most of the time, they’re just expected to continue with their lives as though none of it happened, despite the mental scars it so clearly leaves on all of them.

That’s what Una, based on the play Blackbird by David Harrower (who also provides the screenpay), attempts to explore, the notion that justice may have been served, but the pain and suffering is far from over. While I cannot vouch for the play and how it is structured, in a much more filmic language the story and its powerful themes are present, but there’s a noticeable lack of a real cinematic quality that keeps it from really reaching its potential.

We begin our story as a young woman named Una (Rooney Mara) locates and tracks down a much older man named Ray (Ben Mendelsohn) at his workplace, now going by the name “Peter”. As we learn through several non-linear flashbacks, Ray was once Una’s next-door neighbour, and they had both engaged in a sexual relationship when she was just 13. In the present, Una is there to confront Ray about unanswered questions regarding their sexually abusive past, which sets off an uneasy and often uncomfortable discussion between the two about their original intentions when beginning their affair, and whether or not Ray’s lust for Una at the time was genuine or merely predatory.

The play, from what one understands about it, is mainly a two-handler with just these two characters having this extended conversation with each other, and taking place largely in just the one setting, as is typical for most plays like this. However, because this is a film adaptation, there is an effort by Harrower and director Benedict Andrews (who, crucially, also comes from a theatre background with this being his film directorial debut) to expand on the environment and situation, often adding new conflicts like Ray dodging an embittered colleague after a staff meeting goes south, and even new outside characters like Riz Ahmed as a co-worker at the warehouse where Ray works. That’s all well and good because film is a far different language to theatre and there needs to be a bit more than just two people talking with each other for it to be cinematic, but the thing is that while those additions were necessary for the adaptation, they still manage to take away from what we’re really meant to be focusing on, which is the confrontation between victim and abuser. Whenever there is a meaningful part in their initial conversation, it can suddenly be interrupted by something that doesn’t have anything to do with what they’re talking about, and it can be distracting in how it takes away our focus from what really matters. Again, I have no idea if any of these things were actually in the original play or not, but even if they were it still means that the tension is defused and often takes you out of what is meant to be a very intimate and meaningful butting of heads.

When it is focusing on just what we were expecting to see, it does manage to be a strong and poignant portrayal of sexual abuse, from both sides of the coin. Mara and Mendelsohn are both strong performers that they are able to get across their respective characters’ naivety and uncertainty in the heat of the moment, which lends a particular kind of intensity to the air that they both share because combined, there are levels of anger and regret that they create which is almost certain to combust at any given moment. What’s interesting is that neither of them act like the moral compass in this situation, not even Mara’s Una who is often cold, manipulative, and – as glimpsed at during several points in the film – serially promiscuous, and of course while Mendelsohn’s Ray admits to his wrongdoing he insists he did it because he was genuinely in love, making it a Lolita situation if there ever was one. The film explores these awful decisions from many different angles, all leading up to the key theme of how, no matter however many years ago it may have happened, child sexual abuse will still haunt both the assailant and the victim for the rest of their days, and whenever the film does take time to actually divulge into these themes, you can see the potential for something perhaps a bit more cinematically engaging than the film we ended up getting.

Una is at times a compelling and poignant exploration of the long-term effects of child sexual abuse, for both the victim and the assailant, but more often than not it is intersected with unnecessary additions that may make it seem more cinematic, but end up taking away from the original impact.