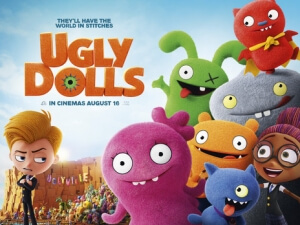 BASICALLY…: A group of misfit dolls travel to the town of Perfection, where they are judged by their unconventional looks and attitudes…

I have now seen two movies in not just the same month, but within the same week as each other, that have been animated musicals based on pre-existing toy lines, made only to cynically promote said toy line to their young audiences, and are both pretty bad. I have no idea if the people behind the UK release schedule were in on the cruel joke when they put these movies one week apart, but for people like me who have to go the cinema every week to see what’s new, we critics are certainly not happy being the butt of it.

Now, if you had to ask me which one I’d have to pick to watch again, between Playmobil: The Movie and now UglyDolls, I would rather stab my eyes out with Playmobil figurines while having headphones glued to my ears which played the UglyDolls soundtrack over and over again, before seeing either one of them again. However, if you really had to push for an answer – and you’d have to push harder than you’ve ever pushed in your life – I’d probably go with UglyDolls, because while it is certainly a bad kids film that rips off from many far superior movies and stitches them together in a plot that makes increasingly less sense as it goes along, it at least had slightly more ambition in its message than Playmobil: The Movie did. Make no mistake, though, that is a real stretch; it doesn’t excuse UglyDolls from being yet another hollow, cynical and uninspired feature-length toy advertisement disguised poorly as a colourful animated musical.

The film is based on the UglyDolls toy line which debuted in 2001, although you’d be hard-pressed to find many young children from that era who even remember them being a thing, let alone any kids that are around today. Regardless, the film is set in a land called UglyVille, inhabited by numerous misshapen plush dolls that have been disregarded from the conveyor belt at a toy factory (we’ll get into the supposed mechanics of this world later). One such resident, Moxy (Kelly Clarkson), becomes curious about what else is out there, other than the young child that she dreams of being owned by one day, and so she and her friends (voiced by the likes of Wanda Sykes, Gabriel Iglesias and even Pitbull) venture to a new land called Perfection, where the dolls are designed to be perfect in every way shape or form. Naturally, their unconventional appearance causes a big commotion, and they find themselves at odds against Perfection’s bullying leader Lou (Nick Jonas) who tries to get rid of the UglyDolls whatever the cost – but not if Moxy and her friends can help it, mostly by singing some cheesy popish musical numbers.

Given that the majority of the voice cast is made up of singers, from Kelly Clarkson to Nick Jonas to Blake Shelton to Janelle Monáe and so on, it’s of little wonder why this is a musical, because the filmmakers have made it to where the singers don’t have to venture too far out of their comfort zone while the people that made it can use it to rip off the soundtracks to the likes of The LEGO Movie, Frozen and most notably Trolls (to a point to where the title UglyDolls rhymes perfectly with it). Beyond that, the movie takes exact plot cues from better animated films like the Toy Story movies, the Shrek movies, and even the Cars movies which aren’t all that great but are at least made by people who have some idea of creativity, whereas this is clearly made by people looking to quickly cash-in on a toy line that’s barely relevant anymore. There’s very little effort put into making the story interesting, the characters memorable, nor the songs which all sound like cheap knock-offs of whatever’s popular on the radio at the moment; it’s all so corporate that any sense of a soul is barely present, and it just becomes a heartless mess that you’ve gotten yourself and your young ones into.

I also spent much of the movie trying to figure out how this world is supposed to work, and luckily I had a lot of time to think about that because it was very easy for my mind to wander during this. The town of UglyVille, for example, appears to exist with its own environment, including a sun, moon, stars and everything you’d associate with outdoors life; however, there are pipes that new arrivals come from, leading straight from the factory assembly line where they’re chucked and supposedly “recycled”, which leads me to believe that the worlds of both UglyVille and Perfection all exist in this one toy factory, where the dolls are completely unsupervised and left to lead their own lives as though they don’t know that they’ll eventually be brought into “the big world” and into the care of a child… except, they’re fully aware of the fact that they’re dolls, with some characters like Moxy having specific dreams of being owned by a kid in the future. Trying to work out how this all added up really was hard, and in the end I gave up because I realised that the movie just wasn’t worth investigating this deeply; I know it sounds silly that I’m trying to make sense of a movie intended for very young audiences, but there was no other investment I was getting out of this movie which left me no choice but to calculate using what few brain cells I have how this world seems to make almost zero sense.

Unless you have very, very young children who would perhaps be more susceptive to the colourful images and not think as hardly about the plot as you would, then just take them to see something much more intuitive like Toy Story 4 or even The Angry Birds Movie 2, instead of this drab and cynical cash-grab that’s not even worth your hard-earned money.

UglyDolls fails to entertain beyond its very young demographic, with a generic story, unmemorable characters, sugary pop musical numbers and a world that makes little sense factoring in to a bland waste of time for anyone over the age of 7.

Want to decide what the movie’s like for yourself? Check out UglyDolls showtimes in London
via