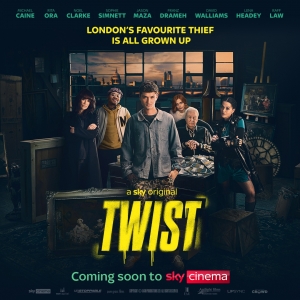 BASICALLY…: In modern day London, young hustler Oliver Twist (Law) teams up with a group of criminals for an art heist…

Imagine, if you will, you’re a GCSE English student at an inner London school, and your middle-aged teacher has just walked in to the classroom. Only, for some reason, they’re dressed head to toe in bling, wearing funky sunglasses in place of their usual spectacles, and instead of their usual smart appearance they’re now harbouring an untucked shirt, cut jeans, and a backwards cap on their thinning head. They then sit down on a backwards chair, face the class and say out loud, “Yo kids, let’s rap about Dickens!”.

You’ve just seen this unfold in front of your very eyes. How would you be feeling (before you inevitably bust out the phone and record every moment of it)? Confused? Embarrassed? Maybe even a little scared? Or all of the above?

Whichever answer you give, however, that’s exactly what watching Twist is like.

A modernised version of the classic Charles Dickens story Oliver Twist, the titular young orphan – played by Raff “son of Jude” Law – is depicted here as an aspiring graffiti artist who’s always evading the authorities. As in the original tale, he soon befriends a group of young thieves (among them Rita Ora’s Dodge and a red-headed girl named Nancy, portrayed by Sophie Simnett) and their mastermind, an elderly man known as Fagin (Michael Caine), who soon recruits Twist to assist them on their criminal activities. Their latest mission is to steal a priceless painting from art curator Losberne (David Walliams), but with Fagin’s ruthless associate Sykes (Lena Headey) closely watching over them, Twist and his new pals must try and pull off the heist without endangering themselves.

In the very first minute of the film, you can feel the pandering start to swing at you with an aluminium bat, as it opens with narration that coyly states that “there’s no singing or dancing in this version”, followed swiftly by the first of many parkour action scenes set to a dreadful urban soundtrack, accompanied by quick editing and flexible camera angles you’d normally find in a Guy Ritchie or Fast & Furious movie. The condescending attitude doesn’t stop there, as there are also characters who explicitly identify as vegan, dress almost exclusively in Primark or Adidas clothing, and even come across a cameo by Keith Lemon himself, Leigh Francis. It is extraordinary how much the filmmakers are desperately trying to appeal to the millennial crowd, particularly those who can’t be bothered to read the original Oliver Twist story on their own time, and they only succeed in coming across as even more out of touch than if they were to just do a more contemporary version of the story.

The thing is, the idea of doing a modern version of a classic Dickens story like Oliver Twist isn’t a bad one; there would certainly need to be some significant changes to the story in order to make it work in the 21st century (as far as I know, there aren’t any orphan-run workhouses where they serve nothing but gruel in 2021), but it’s not impossible for it to work under the right filmmakers. However, this is a film where not even the modernised updates make any sense; for example, the Oliver Twist we see here is a young adult who is at least of drinking age, has the luxury of having at least one parent until early on, and presumably already has a criminal record and disruptive attitude. That right there takes away much of the appeal from the original story and its main character, as it is told from the perspective of a much younger and more susceptible, wide-eyed innocent who’s come from a childhood of misery and hardship, and is eventually groomed into criminal activity by those who actually appear to show him kindness. A movie like Twist was never going to translate this character over exactly as he originally was, but when their very essence and spirit is missing from the adaptation, it’s very easy to notice, and sadly actor Raff Spall lacks the charisma that is sorely needed to pull it off in practice.

Even if it wasn’t originally intended to be a modern version of the literary classic, Twist still doesn’t really work on its own terms. It’s mostly just a very generic heist movie, which relies heavily on one convenience after another, and on people being so dumb that only when it’s too late do they realise something is amiss. That applies to the criminals themselves, too; for all their talk about being master thieves who have apparently gotten away with countless crimes, looking at the haphazard and obvious ways in which they conduct several stings in this movie, they’re lucky to get away with any of it, because in reality these guys would be traced and apprehended so fast by the otherwise useless authorities. There’s nothing in the direction and especially the writing that stands out as genuinely smart or interesting, and with the exception of Lena Headey who’s probably the only one to actually fully immerse themselves into their part – Michael Caine, on the other hand, spends at least 80% of his scenes sitting down in some capacity, which seeing how the 87-year-old actor isn’t exactly frail at this point suggests that they couldn’t pay him to care enough about being more active on set – not many of the actors leave a solid enough impression.

There is definitely a way to adapt a Charles Dickens story for the modern era, but Twist – in all of its pandering to youth audiences and lazy, uninspired plotting – is not going to be the one that gets you to beg for more.

Twist is an embarrassing attempt to modernise the classic Charles Dickens story and appeal to younger demographics, with its hip vibe coming across as extreme pandering, updates to certain characters which don’t make much sense, and not even its generic heist plot working well enough to make up for any of it.

Twist is now available on Sky Cinema and NOW TV.