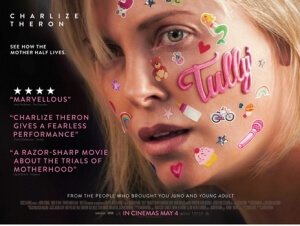 BASICALLY…: Marlo (Theron) is struggling with the burdens of motherhood, but she soon receives unexpected help from a hired night nanny (Davis)…

Over ten years ago, director Jason Reitman and writer Diablo Cody first teamed on Juno, a teen movie unlike most others at the time that took a hard and witty look at the burdens of teen pregnancy, and earned several awards nominations across the board, including an Oscar win for Cody’s original screenplay.

Since then, both Reitman and Cody have had their ups and downs with their follow-up projects (he with underwhelming misfires like Labor Day and Men, Women & Children, and she with the scripts for Jennifer’s Body, Ricki and the Flash and her ill-received directorial debut Paradise), but their third collaboration together – their second was in 2011 with Young Adult – kind of brings everything full circle for them. If Juno was a film about a young free spirit finding her place in the world via premature pregnancy, then Tully is about someone who is suffocating in the world she has made for herself, surrounded by Lego pieces and fridges filled with breast milk. It is a spiritual successor to their first major project together, but whereas Juno was filled with a lot more wit and quippy dialogue, Tully is a much more thoughtful and melancholic take on the burdens of motherhood – although it goes in some directions that some people are bound to have a problem with.

Charlize Theron – who also produces, and reunites with Reitman and Cody after starring in Young Adult – plays Marlo, who we first meet as she’s about to give birth to her third child. Already, you can sense the stress and frustration on her end; her two elder children, especially her son Jonah (Asher Miles Fallica) who is clearly showing signs of autism which people around her unhelpfully call “quirky”, are more than a handful, while her husband Drew (Ron Livingston) barely makes any time to help her with parenting duties, either heading out on business trips or lying upstairs playing video games while she does all the work. Things get much worse for her when the baby eventually arrives, and unable to take the pressure any longer she gives in to her brother Craig’s (Mark Duplass) recommendation about hiring a night nanny to help her out while she rests. This is where we meet Tully (Mackenzie Davis), a much younger, spritely figure who immediately comes in and makes Marlo’s job a hell of a lot easier; the baby is barely a crying nuisance anymore, she is sleeping much more soundly, and the house is far tidier than it ever was. Most importantly, Marlo begins feeling a sense of calm and starts feeling a lot more comfortable in her own motherly skin, all while relying on her new night nanny to make things better, both as a mother and as her own individual self.

Right away, it’s easy to tell that this is certainly Reitman’s strongest film since Up in the Air, and it’s also by far Cody’s most thoughtful and sincere screenplay to date. It tackles a subject that’s been the focus on many films before it, but it does so with an unafraid attitude that doesn’t shy away from how much the burdens of motherhood can put serious strain onto someone like this character. The whole of the first act, which sees Marlo juggling several things at a time from getting up during the night to breast feed her screaming newborn, to dealing with young Jonah’s tantrums brought about by things like a full car park, is kind of uncomfortable to watch, because Reitman directs these scenes as though they have come straight from a horror film. There’s something in the way that it’s edited, framed and even acted that makes you think that a jump-scare is about to happen, but instead you’re far more scared for this mother’s sanity as she tries to do everything with little or no help whatsoever. It’s not until Tully makes an introduction that a much more soothing tone is adopted, and soon you’re just as under her spell as Marlo is; Davis portrays the character as a bright and bubbly soul who just about avoids the manic pixie dream girl stereotype even with her wide-eyed innocence, and both Reitman’s direction and Cody’s writing begin to perfectly compliment her warm presence by slowly turning into a smooth and joyful experience.

The movie, however, belongs to Theron who goes for broke in a tragic and transformative lead performance; not since her 2003 Oscar-winning turn in Monster has the actress really gone to such lengths as she truly embodies everything that Cody has built this character out of, even going so far as to turn her body into that of an overworked and thoroughly exhausted post-natal mother. According to sources, Theron gained nearly 50 pounds for the role, which then took her about 18 months to get rid of after filming ended, but it was worth it because her appearance in this film is almost never played for laughs, but is representative of a mother who has gone through hell and back for nine months, and is having to deal with all sorts of other things on top of all that, which is all something that Theron handles masterfully. Despite the weight gain, this is mostly an unshowy performance that really dives deep into the troubling psychosis of someone on the edge.

That kind of leads in to something that I feel isn’t going to sit right with some people who go to see this movie; without going into too much detail, the idea of postpartum mental illness is brought up as the film goes on, and while it may not be completely original or even that unpredictable, it does raise concern that perhaps this particular subject isn’t being treated or handled in the right way. It’s hard to really go into specifics without spoiling the movie, but given it’s already received some criticism from maternal mental health advocates, it’s fair to say that some will be on board for this conclusion, while others most certainly won’t.

Either way, Tully is a triumphant return to form for both Reitman and Cody, and a reminder of why Charlize Theron is one of our top actresses working today.

Tully is a substantial return to form for both director Jason Reitman and writer Diablo Cody, as they tackle a difficult subject matter in a thoughtful – though not always conservative – manner, with the help of a transformative lead performance by Charlize Theron who reigns supreme here.