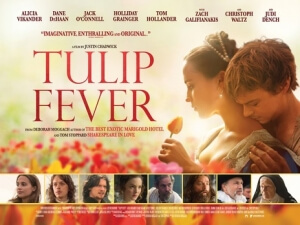 BASICALLY…: A married young woman (Vikander) falls in love with a penniless painter (DeHaan) and hatches a malicious scheme to be with him…

Harvey Weinstein did a lot of terrible things during his reign in Hollywood, including screwing over a lot of hardworking filmmakers with botched release date plans that buried the feature rather than let it sprout. The last big release he worked on before his unsettling action finally became public was Tulip Fever, a period drama that already had a rough journey to completion – production was originally set to begin in 2004 with Keira Knightley and Jude Law as the leads, but was halted days before shooting due to new tax rules affecting film production in the UK, and was finally restarted in 2014 with an all-new cast – but was then tossed around several release date windows across 2015 and 2016 before finally settling on a late August US release in 2017, during the “dog days” of summer when no new releases were expected to do well at all with either critics or audiences. Naturally, the film bombed hard with an 11% Rotten Tomatoes rating and a dismal $8 million worldwide against a $25 million budget, and it is only now in December of 2018 that the movie is finally getting a UK release of any kind.

While it is certainly easy to blame Weinstein’s poor handling of the film for its significant downfall, this is actually one of the very few times where he may have been on to something, because Tulip Fever is a gobsmackingly atrocious mess of a movie that you seriously can’t believe how this much talent – outside of the starry cast, which we’ll get to shortly, you have Mandela: Long Walk To Freedom’s Justin Chadwick as director, Danny Elfman on scoring duties and a script co-written by Academy Award-winning writer Tom Stoppard – could have screwed up so badly.

Taking place in 17th century Amsterdam, at the height of a craze around highly valuable tulip bulbs, young orphan Sophia (Alicia Vikander) is betrothed to the much older merchant Cornelis (Christoph Waltz), who wants to conceive a child with her but to no avail. Unhappy in her marriage, she begins an affair with young painter Jan (Dane DeHann) and makes plans to run away to start a new life, which involves feigning a pregnancy in front of her husband and using her housemaid Maria (Holliday Grainger) – who actually is pregnant by her fisherman lover Willem (Jack O’Connell) – as an accomplice to her scheme.

If you think that this plot is not that of a sophisticated period costume drama but instead a stock plot for every lame 80s sitcom ever written, then you would surprisingly be mistaken. No joke, this is actually the plot of this movie, and what’s even weirder is that it is so clearly written to be farcical and with a strong sense of humour yet is played so seriously and as though it was the most intense and heartbreaking bunch of scenarios when really it would all be easily wrapped up after a half-hour running time and in front of a studio audience. This movie has such a bad sense of tone that scenes will suddenly happen which completely change the mood established by the scene prior, whether it be humorous or deadly serious; one scene will just see the two lovers whispering sweet nothings into each other’s ears, and then the next you’ll have Zach Galifianakis running away from a flock of geese.

Galifianakis, by the way, is one of several baffling casting decisions that make no sense for this kind of film or the types of roles they are playing; not that he or any other actor can’t be in these sort of films or play these sort of characters, but here they just feel so out of place it’s unnatural. You have Galifianakis wandering about doing stupid things in this period drama that wants us to take it seriously, and then there’s Cara Delevingne whose screen time as a largely unimportant character is less than five minutes yet she is credited as one of the leading actors only because it’s Cara Delevingne in what is essentially a glorified walk-on part (though I think I can guess why she is given such high billing; Delevingne has gone public about how Weinstein tried to get her to participate in a threesome whilst lobbying for a film role, and has said that she feels like she got it partly because of this incident, so seeing how this is the one film she has to her credit that also has the producer attached, I’ll let you, dear reader, do the math). Recognisable actors even pop up just to deliver a single line, like Michael Smiley, Daisy Lowe, and most bizarrely of all Johnny Vegas. Yes, you read that correctly; Johnny Vegas is co-starring in a film that feaures Academy Award-winning actors like Alicia Vikander, Christoph Waltz and Judi Dench – to say that this is an insane movie to comprehend is putting it utterly mildly.

It’s clearly been tampered with several times during its lengthy post-production phase, as scenes will just suddenly end or be stripped down to their barest minimum, creating a pace that goes by at a breakneck speed that it’s often hard to tell what is actually happening. You can tell that there is a lot more to these characters and this story that clearly got left on the cutting room floor, as here people will just say or do things with little to no build-up whatsoever, and they come across as stupid sociopaths more than sympathetic characters; you have absolutely no remorse for the main character and what she ends up doing to her husband, who’s really not that bad a person which makes her plan even more heinous and self-serving, yet if this movie had left some actual character development in there then maybe it would have made much more sense.

If you were to just look at the movie without noticing its abhorrent flaws, it actually looks like a decently put-together production; nothing spectacular or even that noteworthy, but the cinematography is fine, the costumes look reasonably period-appropriate, and the majority of these actors are really trying with this terrible material. But this is a colossal failure when you take into account everything else, because it is such a horribly misguided, tonally inconsistent and mercilessly butchered mess of a movie that even Harvey Weinstein could see that this was rotten.

As much as I hate to say it, this may be the one time when we can all agree with him on something.

Tulip Fever is a confounding mess that greatly suffers from a severely inconsistent tone, some bizarre casting choices, and a structure that clearly shows its post-production problems with little attempt to salvage what has been left.