Truman & Tennessee: An Intimate Conversation (Review) – With Friends Like These… 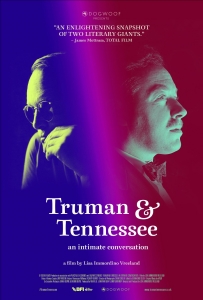 BASICALLY…: The story of the friendship and rivalry between famed authors Truman Capote and Tennessee Williams…

Perfecting the whole “famous for being famous” schtick long before the Kardashians or any vapid reality TV star came along, writers Truman Capote and Tennessee Williams were at one point in time the toasts of the town, the very definition of cultural phenomena throughout the mid-twentieth century with their highly influential books and plays capturing the imaginations of audiences everywhere.

They were also two very complex, tortured and ultimately tragic figures of the public circle who, despite their differences, had more in common than people assumed. Both are now the subject of Lisa Immordino Vreeland’s wistful documentary Truman & Tennessee: An Intimate Conversation, which explores their vast similarities and uneasy, but respectful, opinions of one another in gentle and often intriguing approaches that are largely fitting of their flamboyant personas.

The film is told through a mixture of archival interviews and photographs charting their respective careers through the 50s and 60s, as well as dramatized narration of their own notes which see Jim Parsons portray Truman Capote, while Tennessee Williams is voiced by Zachary Quinto. We see how both Capote and Williams made names for themselves with the publications of Capote’s novels like Breakfast at Tiffany’s and In Cold Blood, and the performances of Williams’ plays such as A Streetcar Named Desire and Cat On A Hot Tin Roof (as well as their subsequent film adaptations), but also how their acquaintanceship over the years would ultimately turn into a troubled yet loving admiration for each other and their unique talents.

It is a documentary that firmly puts the words and opinions of its two central figures on centre stage – no interviews with other personnel take place here; it’s all them and them only – which gives filmmaker Vreeland plenty of room to dive further into their individual psyches and explore what makes them both tick, as well as what might have gotten them ticked off about each other. From their notes, as elegantly narrated by Parsons and Quinto, we get the sense that initial jealousy of their firm grasp on the arts caused the two of them to playfully butt heads at first, while later acts of pettiness – in his famously unfinished novel Answered Prayers, Capote introduces an unflattering character eerily similar to Williams – inspired legitimate anger from the upset party. However, Vreeland’s film also captures how, despite everything, they were deeply connected by a number of individual components, from their difficult childhoods to their depressive states, all the way to their heavy addiction of drugs and alcohol which contributed to each of their deaths (we get to see the devastating physical toll they took on each of them during late-in-life footage). They also had zero qualms about their homosexuality, which they very openly talk about in archive interviews opposite broadcaster David Frost, to an extent that they both reveal some select details of intimacy which, for the time in which their interviews take place, would perhaps have been rather shocking to hear as an audience member.

Vreeland is able to communicate these authors’ personalities and connections without trivialising their individual achievements and setbacks; both Truman and Tennessee are given equal space to have their careers and personal woes examined with the filmmaker’s magnifying glass, detailing their sorrow when a close lover succumbs to cancer, or a sense of remorse over having some of their endings changed when adapted for Hollywood. The film gives an undeniable sense that both are simply human, capable of being deeply flawed while also maintaining their public personas so as to fool the world, but most of all themselves, that they were more than mere men. It is a fascinating dive into not just each of their wildly illustrious careers, but also their overwhelming feelings of existing in a world and time period where they felt that they were born far too early in.

Since the lack of third-person perspectives doesn’t exactly give a fully-dimensional look at either of the two authors, it’s hard to call Truman & Tennessee: An Intimate Conversation the definitive biographical documentary of either individual. However, there is a lot to admire here as it offers great insight into both of their unique lives as well as how, even at their cattiest, both Truman Capote and Tennessee Williams still had a huge amount of respect for each other that surely had a profound effect on not only their dominance of the culture scene of the twentieth century, but also their own troubled lives.

Truman & Tennessee: An Intimate Conversation is a fascinating look at the troubled, but ultimately respectful, relationship between Truman Capote and Tennessee Williams, incorporating a mixture of archive interviews and dramatized narration by Jim Parsons and Zachary Quinto respectively to give a sense of their brilliant yet flawed psyches without trivialising their numerous personal achievements and setbacks.

Truman & Tennessee: An Intimate Conversation will be available to rent or buy on digital platforms, including Amazon Prime Video, from Friday 30th April 2021.