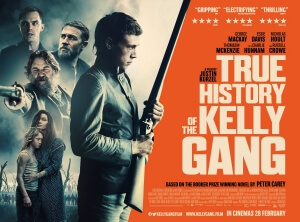 BASICALLY…: Australian bushranger Ned Kelly (MacKay) and his gang run from the authorities in the 1870s…

“Nothing you are about to see is true,” an opening title card tell us. Right there, True History of the Kelly Gang disputes its own title and completely throws you in for a loop. Sure, when it comes to a legend like the Australian outlaw Ned Kelly, liberties need to be taken in order to tell his story on the big screen – and they have been taken for decades, as far back as 1906’s The Story of the Kelly Gang (considered by many to be the world’s first feature-length film) and more recently as the 2003 venture starring Heath Ledger as Kelly – but for anyone going into this movie with the hopes that it will maybe offer a more fact-based look at Kelly’s infamous run-ins with the law, that title might be seen as rather deceptive.

It is, in fact, a gritty, gory and punk-fuelled take on the legend, which might take some time to really get going but once it does then you’re in for a difficult but visually stunning ride.

Much of the film is structured as a sort of origin story for Ned Kelly – think Joker by way of The Nightingale, with a little bit of Nicolas Winding Refn’s Bronson thrown in the mix – as we follow him from a young boy (Orlando Schwerdt) when he is raised in poverty by his Irish mother Ellen (Essie Davis) before being taken under the wing by veteran bushranger Harry Power (Russell Crowe), to a young man (George MacKay) when he falls afoul of English constable Fitzpatrick (Nicholas Hoult) which in turn leads him to flee from the authorities and form a gang of outlaws.

It’s not so much a film focused on why he became such a legend in Australian folklore, but more so on how he achieved said notoriety. By the time he does become the version of Ned Kelly most people know him as, it’s well into the second half and possibly approaching the third act; everything beforehand is showing in great detail most of the events that would later define his later exploits, from his attempted revenge on Charlie Hunnam’s British officer to the cold, psychotic murders of some policemen that he and his gang members commit. It is a slow-burn movie, which might frustrate some people who would rather the film just got to the point sooner rather than later, and admittedly there are parts which drag on for far longer than they really needed to. A sizeable chunk of the film’s first half alone, focused on Kelly as a kid, feels like it could have been trimmed down significantly (although in doing that, it would have cut out one of the film’s highlights – more on that momentarily) and the message would still have gotten across. It is the strength of director Justin Kurzel and the rather striking cinematography by Ari Wegner that our attention does not fully wonder in these slower moments, because Kurzel can stage and pace a scene with nail-biting intensity, and Wegner has a keen eye for the bleak beauty of the Australian landscapes, so at the very least your eyes are being satisfied enough to keep you focused.

Kurzel also instils a punk attitude into some scenes and shots, whether it’s Kelly contorting his body in front of a Union Jack flag, or the anarchic way in which Kelly’s climactic shootout with the police is filmed and performed. It’s a striking juxtaposition, for Ned Kelly could be seen as one of the world’s pioneering punk personalities, and to give him this very nihilistic portrayal that knowingly calls back to the mannerisms of 70s-era rockers while still keeping the story and characters within their time period is a unique and even thrilling prospect. The director has also found an actor who can easily inhabit such a dark soul and still keep him somewhat sympathetic at the same time as being pretty intimidating, something that George MacKay gets down to a tee. His performance is fierce, unlike anything you’ve seen from the 1917 actor to date, as he does not shy away from how this guy, despite being a well-renowned folk hero, is also kind of a psychopath, but he also shows enough vulnerability to hint that there are still traces of the (mostly) innocent young boy he used to be.

Special mention does need to go to Russell Crowe, who isn’t on-screen for very long – maybe twenty minutes, twenty-five at the most – as the bushranger that takes young Ned Kelly under his wing, but in such a short amount of time practically steals the entire film. Crowe doesn’t get enough credit for being a very versatile actor, and he completely sinks his teeth into a character that certainly could have been played by anyone, but would have likely been far less memorable than what Crowe brings to the table (the way he sings a profanity-laden song about the police is delightful). Despite his limited screen time, he savours every minute of it and leaves us with the film’s only character you wish you could spend more time with; when it inevitably places the focus back on Kelly, you can feel the enjoyment levels slip somewhat, because the character of Ned Kelly is a little more straightforward and not quite as engaging as Crowe’s manages to be. Nonetheless, whenever he is on-screen, that’s when the film really comes to life; it’s just a shame that it isn’t for longer.

The film won’t sit well with those that have a weak stomach (some of the violence is pretty brutal, and certain characters do things that get under your skin), but for anyone who is interested in seeing a stylised and honestly brutal – but not necessarily brutally honest – big-screen version of a legend, this is a solid one to take your own gang along to.

True History of the Kelly Gang takes its sweet time to really take off, which might put off some people wanting a tighter look at the life of Australian legend Ned Kelly, but it is held together just enough by stylish direction by Justin Kurzel and some standout performances from the likes of George MacKay and Russell Crowe, the latter of whom all but steals the entire movie within his all-too limited screen time.

Want to decide what the movie’s like for yourself?
Check out True History of the Kelly Gang showtimes in London
via