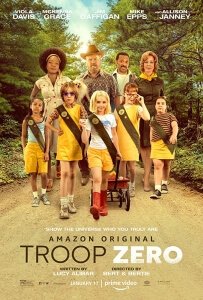 BASICALLY…: A group of young misfits infiltrate the Birdie Scouts in order to win a special talent show…

With the world being such a deep bottomless pit of misery and woe right now, films like Troop Zero are exactly what we need right now; specifically, something that makes you feel just a little bit better about the world we live in even when in reality it’s quite the opposite. This movie delivers that on all fronts, in a feel-good family package that’s wholesome to a fault, not to mention relentlessly sweet and adorable, and at the very least should make you feel a little bit happier than you probably are right now.

Taking place somewhere in the rural neighbourhoods of Georgia in 1977, a young girl named Christmas Flint (Mckenna Grace) spends her days being fascinated by space and its many undiscovered wonders – that is, when she isn’t bothering her busy lawyer father Ramsey (Jim Gaffigan) and his secretary Rayleen (Viola Davis). One day, she hears of a great prize for the winners of the upcoming Birdie Scouts Jamboree; a chance to have her voice recorded on the Voyager Golden Record, which will be launched into space for the purpose of being picked up by extra-terrestrial life. Eager to win such a slot, Christmas decides to form her own scout troop made up of other young misfits in the town, while also recruiting a reluctant Rayleen to act as their troop mother, and together they do what they can to make it to the contest and win the big prize.

A plot like this, about a young ragtag team of outcasts coming together to win a contest, certainly isn’t original, but it’s in the heart where it counts the most, and this movie has plenty of it. Much of the delight comes from the way these young kids interact with each other, and how they all genuinely feel like children playing around, without being too precocious or abnormally serious about any of it. The performances from the child actors are solid enough – Mckenna Grace in particular, soon to be seen in Ghostbusters: Afterlife which is due out this summer (for now), easily carries this movie with real charm – that you feel their connection grow so naturally over the course of the movie, and it’s really heart-warming to see them all working together under the supervision of other good actors like Viola Davis, and Allison Janney who serves as the film’s cold antagonist, the leader of a rival scout group. Not all of these young characters get as much attention as they probably should – a shy religious girl with one eye often gets the shift, as does the group’s sole boy member who’s very clearly effeminate – but their on-screen charm is strong enough to make you temporarily forget the holes in their backstories.

The Southern setting lightens the already upbeat mood, with the local townsfolk and their many eccentricities providing a wholesome family environment that’s incredibly – and remarkably for a Southern town in the mid-to-late 20th century – welcoming and hospitable. It might, however, be a little too wholesome – even the directors, Bert & Bertie, are mere letters away from being Sesame Street characters – as it doesn’t tackle a lot of heavy themes that’ll get people thinking a bit more about it afterwards. The clear intent of this script, written by Lucy Alibar (who also co-wrote the Oscar-nominated script for Beasts of the Southern Wild, and like that film based it on one of her plays, entitled Christmas and Jubilee Behold The Meteor Shower), is to just tell the sweet story of these young kids coming together to win a once-in-a-lifetime contest, and it does it fine enough, but viewers hoping for it to dive deep into more timely issues that the mere setting of the film suggests might not get what they’re wishing to see. The movie is simple and straightforward, with character arcs, plot beats, and third-act mishaps all working out the way you’re probably picturing in your head (one particular outcome is heavily forecasted), and with few real surprises beyond the formula it’s sticking heavily to.

Although you’re not getting anything particularly deep or topical with this film, there is still a great deal of heart and warmth to take away from it, which once again is what we need right now in our lives, so in that regard the movie accomplishes what it set out to achieve. It’s clear that we all need a bit of joy in our lives while we wait for this whole ordeal to blow over, so if some of that joy comes from watching a bunch of kids having fun with each other – and not in a creepy way – then queue this movie up and prepare to be reasonably delighted, even if the movie itself won’t go down as a new modern classic.

Troop Zero is a charming coming-of-age story that overcomes its familiar formula and lack of deep themes with an adorable cast of young actors who are extremely joyful to watch together.