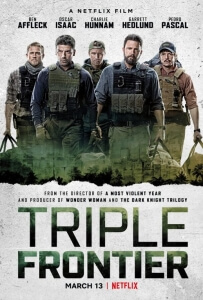 With the recent debate going on in Hollywood over whether Netflix movies should be allowed to compete for Oscars, Golden Globes etc on account of their limited, if any at all, theatrical presence in favour of a more exclusive streaming service, it raises a lot of questions about the state of the film industry within an ever-changing world that’s reliant more than ever on the Internet. There are fears that cinemas could become obsolete if Netflix or any streaming network for that matter had full reign over many feature-length movies, and while that is something worth paying attention to there is also a high level of snobbery from people that disregard films that debut on these services as beneath the quality of movies released theatrically. After all, Netflix’s original film Roma was not only the best movie of last year, but it was far better than many of the films that actually got a cinema release, so in my opinion I think there are certain people who need to accept that, whether they like it or not, the way we watch films is changing, and the industry as a whole needs to embrace this change like they have with so many other technological breakthroughs over time, from sound to colour to 3D and others.

But if nothing else, services like Netflix can be extremely handy for films that need to be rescued from production limbo, such as Triple Frontier which went back and forth between cast members and directors for the better part of a decade – Kathryn Bigelow was originally signed on to direct, and Mark Boal’s script had previously attracted big-name actors like Tom Hanks, Johnny Depp, Will Smith, Channing Tatum, Tom Hardy, Mark Wahlberg and Mahershala Ali who came and went as production, then in the hands of Paramount, kept on stalling – before the streaming platform eventually acquired the rights, locking in new director J.C. Chandor and a solid cast of leading men to finally lead it into principal photography.

After all that effort, it’s somewhat relieving that the movie turned out to be as entertaining and thrilling as it did, otherwise it would have felt like a massive waste of time on everybody’s part.

The film follows a group of military veterans, including Tom “Redfly” Davis (Ben Affleck), Santiago “Pope” Garcia (Oscar Isaac), William “Ironhead” Miller (Charlie Hunnam), the latter’s brother Ben Miller (Garrett Hedlund), and Francisco “Catfish” Morales (Pedro Pascal), who catch wind of a giant amount of money being held by elusive South American drug lord Lorea (Reynaldo Gallegos), and set plans into motion for a massive heist on his compound. However, loyalties are tested once it comes to actually making it out of the country alive with the money, and soon all five men are on a mission to survive as well as bring as much cash with them as possible.

The movie sets itself up as, and eventually follows through with the promise of being, a good old-fashioned heist movie, with five charismatic A/B-list actors working well together on-screen, and a decent amount of action and thrills to hold your attention for long enough without it getting too dull or repetitive. It’s never boring, as there’s something to keep you invested in every scene, whether it’s actors like Oscar Issac and Ben Affleck being fun and competent leads or some of the smooth, well-made action scenes brought to life by a surprisingly game Chandor, with this being his first such movie of the genre after doing much quieter movies like Margin Call and A Most Violent Year. Watching it, you’re constantly on the edge of your seat wondering how, or if, these guys plan to make it out of these increasingly dangerous situations, and there’s a lot of enjoyable set-pieces and an epic scale that does kind of make you wish you were actually seeing it on a big screen, instead of a TV, laptop or tablet where Netflix usually tends to show up.

Things slow down significantly in its second half, but while it continuously treads a line between being a tough-as-nails survival flick and a largely inconsequential adventure film, it’s kept interesting on the strength of its five leads, who are all very enjoyable to watch here, and the curiosity of what is actually going to happen next. It might get a little too slow for some people, and there are times where you are just waiting for something to happen but it never really does, but for me it felt evenly paced and didn’t drag for too long; there would usually be something tense or surprising that would happen which snapped me right back into the world of this movie. As for the characters, on paper they seem thin and not easily defined, which does cause a slight problem when you try to figure out what it is that’s driving them throughout all of these events, but the actors are so good and so likeable that you’re still willing to follow them on this journey, and they even give them a necessary degree of empathy and humanity that make them a little more vulnerable than most other leads in machismo actioners such as this.

It makes total sense that this is on Netflix, because it’s absolutely perfect for a chilled-out night in front of the TV with your friends, just sitting back and having some beers while the action unfolds right in front of you. Luckily, it’s an entertaining enough movie to watch any time of day, whether you’re with people or not (but it is more fun if there’s a bunch of you), if only to see Ben Affleck and Oscar Isaac grab some guns and rob millions of dollars from drug lords, and still be awesome while doing it.

Triple Frontier is an entertaining heist movie that benefits from a charismatic cast of leading actors, some well-made action, and tight suspense that carries you through some of its slower moments.