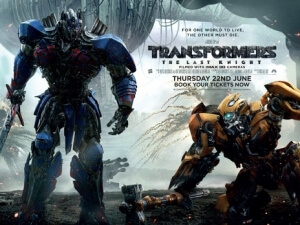 BASICALLY…: During an all-out war between humans and Transformers, Cade Yeager (Wahlberg) goes on a quest to learn the secret behind why they keep returning to Earth…

None of what I’m about to say is really going to matter – you’ve already decided whether or not you’re going to see this, if you haven’t already. That’s the thing with these Transformers movies; no matter how much worse they get, they will always still have an audience (though if early box office tracking is to be believed, there might not even be that anymore), and there will always be at least something to talk about in one of these reviews. In this instance, Transformers: The Last Knight – the fifth film in Michael Bay’s decade-old film series – is perhaps the dumbest film to come out of this franchise to date (and that’s really saying something), but at the same time it gives me a hell of a lot of material to work with when writing about how stupid it truly is.

As it has been from the very beginning, story and characters are mere after-thoughts in this universe of explosions and idiocy, but if you must know anything about The Last Knight then know that it’s essentially the exact same template as its four predecessors – giant robots fighting each other, some big government conspiracy, human characters doing some really stupid stuff, things exploding for no real reason etc – but this time involving King Arthur for some reason (and in those scenes where it actually goes into the Arthurian legend – i.e. the opening five minutes – it’s actually a way more coherent and better-made King Arthur film than King Arthur: Legend of the Sword). Oh, and Mark Wahlberg’s in it again, as are the classic Autobots and Decepticons including Optimus Prime, Bumblebee, Megatron et al, as well as franchise newcomers Laura Haddock, Isabella Moner, and Academy Award-winning thespian Sir Anthony Hopkins who gets to say lines like “Bitchin’ ride!” with a straight face.

Again, none of that really matters, because at the end of the day you’re going to get yet another Transformers movie with all the bells and whistles you’ve come to expect from this franchise by now, from the giant explosions to beautiful women being glammed up like porn stars to the dumb moments of comedy, and so on and so on. However, this one in particular bears the distinction of being especially dumb, to a point where you not only find yourself laughing at the film instead of with it, but you actually begin to consider the possibility that the people behind it have some kind of serious learning difficulty. It’s not hard to come to this conclusion, especially when you have scenes of Megatron negotiating prisoner releases in the middle of the desert (in a scene that screams like Michael Bay saw Suicide Squad and wanted desperately to mimic its style without completely plagiarising it), Anthony Hopkins stopping a scene dead to talk about Mark Wahlberg’s sex life, and a sociopathic robot butler that is literally voiced by the butler from Downton Abbey – and these scenes are just the tip of the iceberg when it comes to this film’s overwhelming dumbness.

Bay’s assault on the senses extends into the film’s unbearably-ADHD structuring, which seems to mostly be comprised of scenes that last about ten seconds long before randomly cutting to the next thing. If you decide to use the restroom during this movie, then odds are you’ll probably end up missing at least five scenes during that time; whoever edited this movie must have clearly been on some kind of crack cocaine that bounces its focus and concentration across the room like the bounciest ball, because they come and go without much explanation or even any reason for being there at all, like Bay and his new team of writers think that the audience is this dumb that they can’t pay attention for ten seconds at a time. Never mind the fact that the plot makes absolutely no sense from the word “go”, but while that certainly doesn’t help it also doesn’t mean that Bay and co can just make a movie that is this structurally and tonally incompetent on top of it – need I remind you that in the middle of an exposition scene, the film stops dead to discuss Mark Wahlberg’s sex life?

Look, of course this movie is stupid trash; all of these Transformers movies have been stupid trash, but this one in particular manages to set the bar even lower than it already was in terms of its lack of intelligence. It’s wildly incoherent, it’s tonally jarring, it makes absolutely no sense whatsoever, and it’s just a two-and-a-half-hour long excuse to watch giant explosions and huge CGI robots fighting each other, even more than any of the previous four movies combined. In other words, it’s a Transformers movie, and if you go into this movie expecting anything more by this point, then I seriously don’t know what to tell you.

If you’re at all curious to see how dumb these movies have gotten, then you’ll get exactly what you paid for; if you gave up on these movies a long time ago, then why the hell are you still going to see it? Either way, it doesn’t at all matter what I say about Transformers: The Last Knight; either you’re going to see it, or you’re not going to see it. The choice is yours alone.

Transformers: The Last Knight is a mind-numbingly stupid movie that hits a new low of stupidity even for this franchise, as it offers the same template “plot” and “characters” as before without anything fresh or exciting added to it, and gives itself a wildly incoherent structure and a tone that’s all over the place and makes it even harder to watch than it already was. But no matter what my opinion is, chances are you’ve already made your mind up about this movie, so by all means go see it or don’t go see it to find out for yourselves.