Fresh from giving audiences multiple headaches with the insufferable Pain and Gain, Michael Bay is crawling back to the Transformers franchise 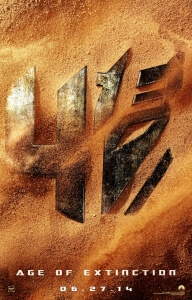 with its fourth entry, now blessed with the subtitle of Age of Extinction.

Although impossible at this point to connect that new title, revealed on a new sand-covered teaser poster, to any part of the story which is still in top-secret mode – but then again, this is Transformers, so what plot?! – Age of Extinction might in fact refer to the film’s introduction of the Dinobot characters, who were confirmed by producer Lorenzo di Bonaventura as being in the movie.

The Dinobots are basically an extension of the Autobots except for the fact that they’re, well, similar to dinosaurs. Hmm, Michael Bay in some way or form meddling with history just for the sake of pleasing teenage audiences? Sounds perfect (also see: Pearl Harbor)!

Transformers: Age of Extinction (thankfully not having gone and used the title Trans4mers… not yet, anyway) is scheduled for a summer 2014 release.