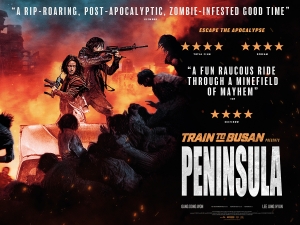 BASICALLY…: Four years after a zombie outbreak, a soldier (Dong-won) is tasked with making his way to the overrun Korean peninsula for a mission…

Even before Parasite’s history-making success at the Oscars, Korean cinema has been widely regarded as a strong creative force, with the likes of Oldboy, The Handmaiden and Burning all making their way into the public consciousness for their formidable and lucrative storytelling methods as well as their powerful filmmaking. One of the more recent pre-Parasite films from South Korea to make an international splash was Yeon Sang-ho’s Train to Busan, which took the classic zombie template and turned it into something immediate, engaging, and utterly thrilling; in other words, unlike most zombie movies to have come out in the last few years which, by and large, have stuck to similar themes and old tropes.

If Train to Busan is the exception, though, then its anticipated follow-up subtitled Peninsula – which Sang-ho also directs and co-writes with the first film’s sole writer Park Joo-suk – falls much more in line with the typical zombie movie crowd. In some ways, it’s a step backwards after a promising start, but it’s not like we suddenly went from George A. Romero’s Night of the Living Dead straight to Scouts Guide to the Zombie Apocalypse; while it’s nowhere near as fresh as the original, Peninsula still packs an entertaining bite that’s full of undead fun on a slightly larger scale than before.

Set four years after a zombie outbreak effectively rendered the entirety of Korea a no-safe zone, former Captain Jung-seok (Gang Dong-won) is living in Hong Kong and riddled with guilt over his actions during the initial evacuation. He and a small team are tasked by local gangsters to return to the Korean peninsula and retrieve an abandoned food truck containing $20 million in bills, with the promise of receiving half of the bounty upon their return. As Jung-seok, his brother-in-law Chul-min (Kim Do-yoon) and the rest of the red shirts arrive in an abandoned Korea, overrun by zombies and even deadlier militia groups, they must attempt to not only survive but get out of the country with the money – but Jung-seok’s past comes back to haunt him when he comes across a small family who have adapted to the new world in their own unique way.

Sang-ho’s sequel clearly has an Escape From New York vibe going for it, complete with a Snake Plissken-esque lead action hero, and there’s even a death-match where prisoners of said-militia groups are numbered and pitted against a raging horde of zombies. It’s also reminiscent of a Fast & Furious movie, with lots of car chases that feature some pretty sub-par visual effects, and the main plot of the film even surrounds a heist not unlike the fifth entry (though this movie seriously needed Dwayne Johnson hunting down the heroes in a similar fashion). There are also shades of The Walking Dead (naturally), and its well-worn messages that sometimes it’s humanity that’s scarier than the actual monsters; the two main villains could easily be mistaken for both Negan and The Governor on that show. And don’t even get us started on the parallels between this and the Mad Max series (armoured vehicles! Corrupt leaders! A loner hero! And so on). Basically, Peninsula is made up of a lot of elements from other movies, and while Sang-ho does his best to keep things relatively entertaining, with some memorable imagery and a couple of inventive set-pieces, the script feels like a mish-mash of several ideas from those respective properties thrown into the same pot, many of which aren’t explored as thoroughly here as they could have been. Certain supporting characters are underdeveloped, so when something happens to them we don’t feel as much empathy as the film tells us we should, and entire plot strands are either quickly wrapped up or side-lined entirely until the final few minutes. Put simply, it’s perhaps too much for one movie, when at least another couple would have had more opportunity to establish this post-apocalyptic world far greater.

The plot in and of itself is fine, and to an extent you’re on the lead characters’ side as the film goes along, but there isn’t as much intrigue or even as much tension as the first film, which was a tighter and more consistent film in both its ideas and its characters. This one feels like it just wanted to go bigger for the sake of it, without realising that doesn’t necessarily make it a great movie; by relying a lot more on zombie movie tropes that don’t feel as fresh this time round, and characters who by all accounts aren’t bad but just aren’t that interesting, Peninsula ironically becomes the very kind of post-apocalyptic zombie movie that the first Train to Busan film was actively trying to distance itself from. That doesn’t mean it’s a bad film – again, there are some cool action moments that are well-filmed and choreographed – but it does mean that it isn’t nearly as worthy of the acclaim as its predecessor.

For what it is, though, Peninsula is a fine enough film to put on at home during an evening in, with a takeaway meal on your lap. It’s not at all scary, and not even that gory, but it’s got a few decent action thrills to keep you at least entertained throughout its slightly overlong running time. Or, if you’re after a fresher kind of zombie movie, try and find a copy of the first film and see how far you can get through your dinner before succumbing to pure intensity. Either way, you’ll have a good enough evening.

Train to Busan Presents: Peninsula is a follow-up to Yeon Sang-ho’s fresh and intense zombie film which opts for a more standard formula that borrows from a lot more sources, rendering it not nearly as original and inventive as its predecessor, though the film is entertaining enough to overlook some of its less interesting characters and underdeveloped world-building.

Train to Busan Presents: Peninsula was due to be out in cinemas across the UK on Friday 6th November 2020, but due to the latest government announcements those plans have been cancelled. It is currently scheduled for a digital and DVD release later this month.