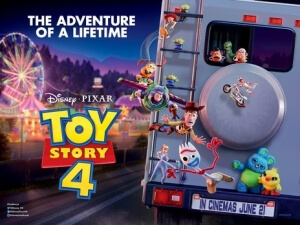 The Toy Story films are so universally adored that you’d be hard-pressed to find a single soul on this earth who couldn’t tell you who Woody or Buzz Lightyear were, yet there was overwhelming trepidation about a fourth entry. Many of us, of course, felt that Toy Story 3 wrapped things up extremely well, providing a fitting end to the saga with even the very last shot of the movie coming full circle with the very first shot of the first film, so for another one to suddenly show up had people worried that this would ruin the series with its very unnecessary existence, and given Pixar’s bumpy track record as of late there was a likely chance that Toy Story 4 could go the way of something like Cars 3 or The Good Dinosaur. Either way, most people were scared, because this series is so beloved that it would be a crying shame if it was suddenly ruined by the fact that Pixar wanted to make a little more money from it.

However, this is no cynical cash grab; in fact, it’s perhaps the most vital piece of the whole Toy Story saga, an epilogue that ties everything up in an even neater bow and ends on a note that outdoes even the previous film in terms of poignancy and earnestness. It’s a movie that you might not think you need, but seeing it play out with the themes it has and the note-perfect characterisation, you realise that it’s been one you’ve been needing to see all your life.

Taking place shortly after the events of Toy Story 3, the toys of Andy’s room are now in the possession of young Bonnie, who is just about to begin kindergarten orientation. Woody (Tom Hanks), who is being left out of Bonnie’s playtime, accompanies the nervous young girl to class where he secretly helps her create a new toy out of craft material and a spork he collects from the trash; Bonnie names the new creation “Forky”, who to Woody and the gang’s shock actually comes to life (and has the voice of Tony Hale) and immediately suffers from an identity crisis, convinced that he is meant to be trash instead of a toy. When the toys head out on a road trip with Bonnie and her parents, Woody uses this opportunity to help Forky come to terms with his new existence, although it comes from a personal desire on Woody’s part to find meaning in his existence once more. Together, along with fellow toys such as Buzz Lightyear (Tim Allen), they embark on an adventure that sees Woody reunite with his old flame Bo Peep (Annie Potts), who was sold off when they were still with Andy nine years prior, and encounter new faces such as carnival prize duo Ducky and Bunny (Keegan-Michael Key and Jordan Peele), Canadian stuntman figurine Duke Caboom (Keanu Reeves) and pullstring doll Gabby Gabby (Christina Hendricks) who has her eyes set on Woody’s voicebox to replace her own. Above all else, though, Woody faces a very personal challenge about his stance as a child’s plaything, and finding a new purpose when his previous reason for being is now off on his own adult adventures.

More than the previous three films, Toy Story 4 looks at the theme of growing up with the most mature eyes; Woody, in particular, is struggling to accept his new reality, just as all of us do after a pretty major break-up, and feels lost as he tries to make his way through a difficult situation where he still finds himself pining for a purpose in life. This is very much his movie, with the rest of the toys largely reduced to miniscule supporting roles (the only other character of the original bunch to get a bigger role is Buzz Lightyear because, well, it’s Buzz Lightyear), and that makes sense because Woody has always been the character with the most weight to him, so it’s only natural for him to take centre stage for this film. He deals with a lot of issues in this movie, such as parenthood when he tries to nurture Forky – effectively a newborn toy – towards a more meaningful existence, and figuring out where his loyalties lie when Bo Peep comes back into the picture, all amounting to a strong arc that feels absolutely fitting for a character that’s gone through so much over four movies and deserves a more proper closure than simply being handed to a new kid, who as it turns out doesn’t hold him in as high regard as Andy did. The combination of the strong writing and Tom Hanks’ soothing vocal performance is powerful enough to make this movie an effective character study, almost like this is the Logan of Toy Story movies; hell, they could have just named this movie Woody and it still would have been the most mature one out of the bunch.

While this is definitely Woody’s finest hour – to borrow from the never-aired episode of the character’s television show Woody’s Roundup, introduced in Toy Story 2 – the movie has other great qualities to it which make it an extraordinarily pleasing movie for all ages. The humour is spot-on, with many of the one-liners and character quirks succeeding in getting huge belly-laughs – while Ducky and Bunny get the lion’s share of laughs, which shouldn’t be surprising seeing how they’re voiced by comedy duo Key and Peele, it’s Keanu Reeves’ dedicated turn as traumatised stuntman Duke Caboom who’s the funniest new addition to the roster – and the film’s designated villain, Christina Hendricks’ Gabby Gabby, is given a lot of depth and emotional weight that you understand exactly where she’s coming from, even if she has to sometimes resort to villainous means to get what she wants. Elsewhere, the animation is some of Pixar’s strongest yet, with the attention to detail in the backdrops and foregrounds looking startlingly photorealistic, with each shine in characters’ porcelain and plastic coming through so effortlessly that it looks real enough to pass as the actual thing. Artistically, this is an exceptional piece of work, and it has enough substance to it that keeps it far away from being a shallow corporate cash-in like so many people feared it might be.

Did it need to exist at all? Probably not, but much like Forky in this film – who’s a very likable new character – it was willed into existence against all odds, and nurtured into a thoughtful, emotional and undeniably entertaining product instead of the trash that it so easily could have been. It is a sequel that now feels absolutely vital to the whole Toy Story saga, without which the whole thing would have crumbled into a thousand pieces, because it offers such a satisfying pay-off that’s rich with emotion and heart that to deny its existence would be simply criminal.

It’s too early to say if this is indeed the best of the movies, but it is by far the most grown-up of a series of movies that have been about nothing but growing up.

Toy Story 4 more than justifies its existence with a powerful and emotional character study of Woody the cowboy, while also giving us some fantastic animation, strong humour and truly heartfelt moments that make it another – and likely final – knockout for this series.

Check out Toy Story 4 showtimes in London
on Walloh.