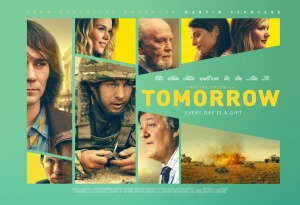 BASICALLY…: A traumatised war veteran (Street) befriends a carefree guy (Brennan) who lives every day like it’s his last…

A couple of weeks ago, the profoundly inept Wolf somehow made its way into cinemas where it had absolutely no business being seen on. That movie is easily one of the year’s worst; incompetent direction, horrendous acting, and a complete disregard for everything in the movie rulebook that should make a film even remotely watchable.

As if that weren’t enough, the film’s director, writer and star Stuart Brennan is back with yet another movie that, again, is inexplicably showing on more screens than it probably should. The thing is, though, while Tomorrow isn’t technically a good movie, sharing more than a few similar faults with Wolf, it at least feels like a movie, in the sense that it looks and acts like one that should be shown in cinemas, from the quality of the filmmaking to the performances. That alone is enough to make Tomorrow the far superior movie, even though there are a number of things going against it.

Brennan only stars and co-writes this one (along with co-star Sebastian Street), with directing duties here going to Martha Pinson in her feature film debut. She directs the story of war veteran Tesla (Street), left a paraplegic after serving in Afghanistan, who strikes up a friendship with the carefree Sky (Brennan), and together with respective partners Katie (Stephanie Leonidas) and Lee-Anne (Sophie Kennedy Clark) attempts to acquire the funding to open a restaurant that Katie has designed for her Masters degree. While Tesla – and no, that’s not some cute army nickname, that really is his name – struggles with PTSD and working in a hotel kitchen to prove to a potential benefactor (James Cosmo) he has what it takes to run his own kitchen, Sky keeps his deteriorating health a secret from his close ones, even though it’s painfully clear what it is he’s suffering from.

Much like Wolf, the editing is atrocious; scenes will intercut with each other so often that there are times when dialogue from the previous scene begins to overlap into the next, and there is no visible flow as it goes from one directionless moment to the next. It makes odd editing choices like this all throughout the movie, at the expense of getting to properly know these characters or understand their relationships with one another. You never fully buy the friendship between both Tesla and Sky, because they are just suddenly inseparable after just one encounter, and there is nothing shown in between then that really explains what draws them to each other. Almost the exact same can be said about the girlfriend characters, who are at first set up to be potentially three-dimensional characters but soon rescind into being thin, underutilised caricatures from your average TV soap opera, thanks to the absence of scenes where we really needed to see them interact more with each other. The fact that none other than Martin Scorsese has an executive producer credit on this film, as poorly edited and structured as it is, is perhaps the biggest WTF of them all (then again, he also had a hand in The Snowman from a couple of years ago, which was also bad for not entirely dissimilar reasons).

Of the two leads, Sebastian Street is the superior actor; he is understated for most of it, but when the time comes for him to have an emotional reaction to something, he is showing tears and acting like someone who has at least a fraction of charisma. The same cannot be said about Stuart Brennan; I’ve now seen this guy try to act in two different films less than a month apart from each other, and in neither of them does he not only have any screen presence or charisma to his credit, but any acting range to speak of. His delivery, just as it is in Wolf (which, for context, is a movie he also director, wrote and produced), is flat and dull, with his whiny voice lending little credibility to the lines and character he has written for himself, and making him sound like an entitled prat more than someone deserving of our empathy. The 36-year-old actor even writes himself as being 29, which is about as believable as many of the other oddly convenient plot points in this movie, and suggests an ego-driven desire to look like a competent actor when in fact he’s really not.

Director Pinson feels at a loss as to what to do with Brennan and Street’s endlessly contrived script, and hands over control to both the editor and her two stars/writers, with semi-disastrous results. It’s not very well made, the acting is passable at best – James Cosmo acts up a storm next to someone like Brennan who cannot keep up with his elder co-star’s talents if he tried – and it’s frightfully uninteresting to both look at and listen to. Yet, despite the movie’s many, many pitfalls, I would easily choose this movie over Wolf any day. Both movies completely caught me off-guard by just suddenly showing up in cinemas as the unannounced party-pooper, but something about this film felt more right to me, even though I fully admit that a lot of this movie is wrong. It had ideas of what it wanted to be, and had some level of ambition in its storytelling, all of which are things that Wolf completely lacks, and makes it a far emptier, more draining experience than Tomorrow is.

Either way, none of them do Brennan any favours, as they have only highlighted what a poor acting talent he is, even under the direction of people who are technically far more able than he is behind the camera. This one just happens to embarrass him a little less than the other one.

Tomorrow is a flat drama that suffers greatly from atrocious editing, unfocused structure, and performances that are passable at best – including a charisma-free turn by co-writer Stuart Brennan – but compared to the actor’s previous film Wolf it is at least a bad movie that looks like it belongs on the big screen. It’s still a bad movie, but not nearly as bad as we’ve seen a Stuart Brennan movie be.

Want to decide what the movie’s like for yourself?
Check out Tomorrow showtimes in London
via