Tom & Jerry: The Movie (Review) – At Least They Don’t Talk In This One 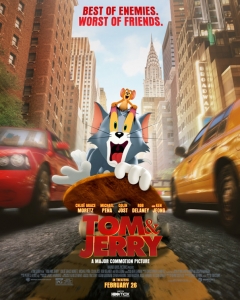 BASICALLY…: Long-time rivals Tom and Jerry bring their battle to a fancy New York hotel, where an important wedding is about to take place…

Live-action movie adaptations of beloved cartoon characters can go one of two ways: a loving homage complete with faithful character designs and a clear understanding of what made them work in the first place, or a photo-realistic CGI bastardisation that throws in non-stop references to pop culture and fart gags without any trace of respect for the young audience. Tom & Jerry: The Movie fits somewhere in between, as it was clearly made by people who greatly admire the antics of the iconic cat-and-mouse duo, but were perhaps compelled by the powers that be to make it more hip and relatable with the young crowd.

The result is a film of mixed appeal; there’s enough for casual Tom & Jerry fans to enjoy, though a lot of the other elements don’t work quite as well, but in terms of the pretty bad reviews it’s been getting lately, it’s far from the worst example of bringing classic cartoon characters to the real world.

In the case of Tom & Jerry: The Movie, though, this appears to be a world where every single animal – and not just our lead cat Tom and mouse Jerry – is an animated creation, in a nice touch that doesn’t make it too hard to accept that a blue cat is causing havoc while chasing a little brown mouse around real humans. Here, both Tom and Jerry are introduced as they’re both entering the city of New York to find somewhere to live, though Jerry has a bit more success when he sneaks into a fancy hotel, which is about to host the wedding to prolific socialites Ben and Preeta (Colin Jost and Pallavi Sharda) and cannot afford to have a rodent infestation. The hotel’s newest employee, Kayla (Chloë Grace Moretz) – having bluffed her way to a temporary position after handing in someone else’s CV – is tasked with getting rid of the mouse, and she soon recruits none other than Tom to capture Jerry without causing too much attention, but this being a Tom & Jerry movie that simply isn’t possible, and an all-out battle between the two brings enough chaos and destruction to jeopardise the wedding.

It should be of no surprise to anyone that the best part of Tom & Jerry: The Movie is, well, Tom and Jerry themselves. Brought to life by CGI that is specifically designed to match their more recognisable 2D-animated selves, the characters are given a lot of energy that is highly reminiscent of their glory days, albeit with a few modern twists (not all of which work, but the ones that do still get a laugh). In a welcome addition that further replicates their classic personas, neither character has any proper dialogue, which was one of the main (and many) criticisms of their previous, fully-animated theatrical outing, leaving their actions to speak far louder than any words could. Speaking of their actions, the slapstick-heavy cartoon violence – always a staple of the classic cartoons – is very much present here, and it’s also here where you can tell that director Tim Story and his team of writers and animators clearly did their homework with how these characters interact and face-off with each other, because a lot of it actually does feel like proper Tom & Jerry shenanigans, far more than a lot of the duo’s more recent direct-to-video outings have been (a lot of which seem to just implant the characters in classic Warner Bros-owned stories like The Wizard of Oz and Charlie and the Chocolate Factory, and simply stop there).

While the presence and mostly faithful interpretation of these beloved characters isn’t so much of an issue, it’s the film that’s going on around them which doesn’t leave much to the imagination. It’s mostly a bland hotel-set family movie in the vein of Dunston Checks In, with flat comedic writing that cannot even begin to compete with the natural antics of its central cat-and-mouse duo, and performances which sometimes feel a little reserved and uncomfortable that they’re essentially acting opposite nothing. Chloë Grace Moretz does okay here, but even she and other talented actors like Michael Peña and Ken Jeong can’t quite match the chaotic energy that a live-action Tom & Jerry movie perhaps promises, and you can often tell that director Story wasn’t able to properly direct the actors to sync their movements along with the faster-paced animated animals (which, again, are not just limited to the cat and the mouse).

It’s also easy to spot the parts where studio executives perhaps slipped in notes to the filmmakers to make the movie more hip with the kids, because they’re often the cringiest parts of the entire film. An opening sequence where animated pigeons rap into the camera is perhaps not the best way to start things off, while the soundtrack is largely made up of funky pop tunes that feel out of place even in this alternate universe of animated animals. It’s not like Tom and Jerry themselves haven’t ever fallen victim to dated zeitgeists – back in the 1940s, they dedicated an entire cartoon to the decade’s zoot suit fashion fad – but that doesn’t make it any less noticeable when characters drop lines like “LOL” into conversations or slip into autotuned musical numbers out of nowhere.

Though it’s not that hard to pick up on its pandering nature, and there are plenty of reasons why it doesn’t entirely work, I can’t say that Tom & Jerry: The Movie is a complete failure. It does, at the very least, have some understanding of the title characters and how they violently interact with one another, and it’s an enormous step up from something like The Smurfs or Alvin and the Chipmunks which bathed a lot more in the studio cynicism than this one does, because this movie feels like it was made by some people who like the original cartoon. Is it the perfect Tom & Jerry movie? Absolutely not, but for all of the places it could have gone really wrong – and believe me, there’s more than a few – it’s a miracle that it isn’t quite as frightfully bad as it could have been.

Tom & Jerry: The Movie often shows a strong level of understanding around the titular cat-and-mouse cartoon duo and their violent antics, which makes it easier to tolerate than other recent examples of live-action cartoon adaptations, but the bland and often pandering film they’re placed inside of isn’t nearly as funny or fresh as the duo themselves.

Tom & Jerry: The Movie is now available to rent on digital platforms, including Amazon Prime Video.