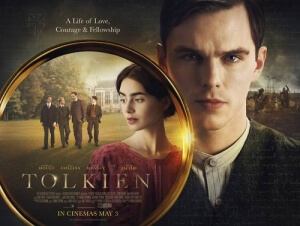 BASICALLY…: As a young man, J.R.R. Tolkien (Hoult) experiences friendship, love and conflict – all of which inspire his stories in Middle-Earth…

The fact that only now has someone been compelled to make a biographical film about the life of J.R.R. Tolkien is shameful; the author is one of the best-known names in literature for his numerous tales set in Middle-Earth, among them The Hobbit and The Lord of the Rings which have had hundreds of millions of copies sold worldwide in several different languages, and led a fascinating life that saw him fight in the First World War, serve as a professor at Oxford, and according to reports even trained to be a British spy during the Second World War, all of which would make for a film just as compelling and epic as the movies inspired by his work.

But Tolkien, appropriately enough, feels more like the first part of a much larger story, and while it’s certainly interesting to see a certain period of the author’s life play out for us on screen, it’s not quite as compelling as it needs to be for us to be interested enough to carry on with this particular journey.

The film takes place primarily during Tolkien’s early years, when as a young man (played by Nicholas Hoult) he is fighting in the trenches in Somme during the First World War. His time in the trenches more or less serves as a framing device here, as we flash back to when a much younger Tolkien (Harry Gilby) relocated to Birmingham, and placed into care following the unexpected death of his mother. At school, he befriends a small group of boys who seek to change the world through the power of their artistic talents, and even falls for Edith (Mimi Keene as a young girl, and Lily Collins as an adult) who resides in the same home as he does. As he gets older, Tolkien develops his growing admiration for the beauty of language, and even begins to study a course on Philology at Oxford – until the outbreak of the Great War sees him and his friends be drafted to fight for their country.

I’ll admit, it was a smart choice for them to only focus on one aspect of Tolkien’s life, as opposed to cramming in everything he did into one overstuffed running time; that way, it avoids relegating this early and arguably very important part of his timeline to a rushed montage that gets it all out of the way early. The problem they’re left with, however, is to find a way to tell this part of his life without falling into too many generic biopic tropes, and sadly the script that was used for the final product doesn’t set itself apart from many other movies like it. There’s a large portion of dialogue dedicated exclusively to exposition about many of the things about Tolkien’s early years that we’d much rather see for ourselves rather than hear about it from other people; because of this, many of the characters aren’t given enough room to be fleshed out or made interesting enough to care a whole lot about them. You’re never quite sure why Tolkien is risking his life in the WW1-set wraparound segments to try and find his friends, because we’ve not been given the chance to know these people and find out what it is about them that should make us emotionally invested in them. The same can be said for his central romance with Collins’ Edith Bratt, which is neither of the actors’ faults as both do as engaging a job as they could have done, but the way their courtship is written feels very manufactured and even right out of a soap-opera.

Perhaps its disappointingly generic approach, and lack of real emotional weight towards these real-life figures, was one of the reasons why the Tolkien Estate recently refused to endorse the film and its contents, as they probably believed that his story was worthy of a more unique and grander script that really dove into his real legacy and impact on the world of literature – in some ways, I can see where they’re coming from. However, while the script leaves a little more to the imagination than one would have hoped about a J.R.R. Tolkien biopic, the quality of filmmaking itself is at least handsome enough to get you by, even during its many narrative lulls. The acting, as I touched upon earlier, is perfectly fine here, with Hoult doing a fine enough job as Tolkien even when the script lags behind his talents, and sharing a sweet bit of chemistry with Collins who also does the best she can with the thin material. The direction by Dome Karukoski serves its purpose well enough, the cinematography by Lasse Frank is rather gorgeous, and composer Thomas Newman delivers one of his stronger scores in recent years. By no accounts is it a terribly made movie, nor is it even a terrible movie altogether; it’s just a case of this being a little too generic for someone as revered and celebrated as Tolkien, which is made more disappointing when you consider all that he had brought to the world through his stories and unique approaches to language has been mostly reduced to something that plays things a lot safer and more like everything else in this world.

I’m not entirely sure if the intent was to have this film be the first in a series of movies chronicling Tolkien’s life, but if that was indeed what they planned then perhaps his story would be better suited to a TV miniseries rather than a film. Making a movie instead perhaps makes more sense, especially given the success of both Lord of the Rings and The Hobbit film trilogies, but if you’re going to do that then you’re going to have to avoid being as generic and by-the-numbers as other movies like it. Tolkien, sadly, doesn’t do that, and therefore it probably would have been better off on the small screen instead.

Tolkien is a handsomely made yet undeniably generic biopic focusing on the early years of J.R.R. Tolkien, which despite some good performances and often beautiful craftsmanship cannot shake an all-too safe script that isn’t worthy enough of the author’s legacy.

Check out Tolkien showtimes in London
on Walloh.