Together Together (Review) – Knocked Up By Way Of Woody Allen 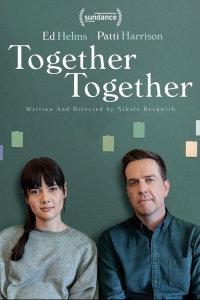 BASICALLY…: A young woman (Harrison) develops a friendship with an older man (Helms) when she agrees to become his gestational surrogate…

This review of Together Together was conducted as part of the Sundance Film Festival: London.

A movie about a surrogate pregnancy and the complications that both the millennial carrier and the out-of-their-depth provider have to go through? Surely, you jest, I already covered this movie not that long ago. Relax, mere mortals, for while it’s pure coincidence that I am reviewing writer-director Nikole Beckwith’s Together Together shortly after viewing The Surrogate, the two of them are completely different movies.

This one is much more about the bond that grows between the two mismatched pair, but before you blow the whistle of familiarity once again, this isn’t Knocked Up either. In fact, this is more Knocked Up if it were directed by someone doing an erstwhile Woody Allen impression – the filmmaker himself is brought up in conversation during the movie, and the credits even have the same font as a lot of his movies do – but either way, romance isn’t really on the cards here. Instead, Together Together far more interested in the platonic friendship that forms from a rather unusual situation, and does so in a sweet and sensitive approach that makes it accessible, if not entirely audience-friendly.

The film begins as a 40-something guy named Matt (Ed Helms) is interviewing 26-year-old Anna (Patti Harrison) to be the surrogate mother for his child, which he plans to raise as a single parent. Soon, we’re well into the first trimester – all following trimesters are presented like chapter titles – and both Matt and Anna are awkwardly beginning to know each other, because why wouldn’t the person carrying someone’s child not engage in some kind of conversation with the provider of sperm? It isn’t long before there is a genuine connection between the two, albeit one that is entirely platonic; as Matt prepares to become a father, Anna struggles with keeping her pregnancy under the radar while still taking her fair share of lovers and working at a coffee shop, both of which are things that the two of them talk about and try to work around to make their friendship work, pregnancy be damned.

It is a comedy where the humour is largely muted, but never dry; there are a lot of funny exchanges in the movie, either between our two leads or supporting characters, which are executed without being overplayed or out of place in the situation. It all feels very of the moment, and even springs from some unlikely places, such as what colour Matt wants to go with for his child’s bedroom wall, all while consulting a book that is far too analytical about certain colours’ subconscious effect on people. There is a noticeably neurotic sense of humour that the movie sometimes exhibits, again not unlike a contemporary Woody Allen movie; Matt starts to freak out about things like Anna having sex with someone when she’s pregnant with his child, while Anna is self-conscious about her reputation with family and friends given that, as we learn during the opening interview, she was previously pregnant and gave up her child for adoption. Beckwith goes her own direction with the overall approach to its comedic intervals, though, as she writes into her script a realistic kind of humour that feels natural, which she also injects into her steady direction.

Much of Together Together’s strength is placed on the shoulders of the two leads, and for a couple who at no point share truly romantic feelings for each other – at least, outside their love for each other as people and friends – Ed Helms and Patti Harrison do work very well together. It’s nice to see someone like Ed Helms take a step back and play a role where he isn’t being constantly humiliated in extreme comedic situations, while Patti Harrison is a droll presence that earns easy comparisons to Aubrey Plaza. The two of them share some very nice moments together, whether they’re watching episodes of Friends (which she openly calls dumb) or exchanging some encouraging words of wisdom when one of them is not feeling so great. It’s enough to make you think that maybe, in another life, these people could have gotten together in the traditional romantic sense, but the actual circumstances unfortunately relegate them to just friends; close friends, but friends nonetheless.

Some will take slight issue with the way that the film wraps itself up, which is rather abrupt considering there are still certain things left unsaid. However, by that point the film has done enough of a good job with these two lead characters and their situation that you can probably guess what the next step is for them. Whether you’re rooting for them as an unrequited couple or a pair of really good mates, Together Together is a nice tale of friendship that doesn’t feel the need to overstep its boundaries.

Together Together is a pleasant look at a developing friendship during a surrogate pregnancy which is carried by the weight of leads Ed Helms and Patti Harrison’s sweet platonic chemistry and a muted but realistic sense of humour, almost like Knocked Up by way of Woody Allen.

Together Together currently does not have a UK release date – stay tuned!