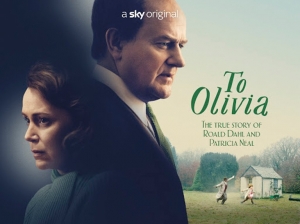 BASICALLY…: After a family tragedy, author Roald Dahl (Bonneville) and his wife Patricia Neal (Hawes) must deal with their grief…

Losing a child is an unspeakable trauma, and in the case of famed children’s author Roald Dahl and Hollywood actress Patricia Neal – and yes, however unlikely it may seem, once upon a time they were indeed an item – when they very tragically lost their seven-year-old daughter Olivia in 1962 to a measles-induced form of encephalitis, it is said to have severely affected their overall relationship, which ultimately ended with divorce in 1983.

Conveniently, none of those grimmer details are mentioned in To Olivia, and instead suggests that while the initial display of grief was very difficult, there was more of a happy ending in sight for the family than what it eventually turned out to be. It’s the end result of a good-intentioned but slightly misjudged attempt to dramatize this real-life emotional struggle as a family-orientated drama, where the younger viewers are kept far too much in mind as it softens a lot of the facts to make it more palatable for children, but too twee and simplistic for older viewers.

The film begins in that fateful year, as Dahl (Hugh Bonneville) and Neal (Keeley Hawes) have settled into a country home in Buckinghamshire where they are happily raising their young children, including eldest daughter Olivia (Darcey Ewart). Dahl in particular has a very strong connection to Olivia, indulging her imaginative nature and even taking inspiration from some of her more creative ponderings, but of course that isn’t to last. When Olivia passes, it sends a wave of grief throughout the family, with Dahl becoming grumpier and more withdrawn into his famous writing shed, refusing to even say his daughter’s name out loud, while Neal contemplates a return to acting with a small but pivotal role in a script called Hud, which is set to star Paul Newman (Sam Heughan) in the title role, and which she would eventually win the Best Actress Oscar for.

The film is your standard grief-ridden family drama, with a tinge of magical realism designed to bring a flavour of whimsy to the tragic atmosphere (this is mostly shown through Dahl’s imagined interactions with his younger self, in an odd and ultimately pointless addition). In some ways, there are certain similarities with the recent Come Away, another film that involved family tragedies and the heavy presence of famous literary figures, although To Olivia is perhaps the stronger of the two because at least here, it’s not as all over the place with its tone or even its sense of maturity.

However, this one isn’t that much better; it’s mostly a glib and not especially deep portrayal of grief in its purest of forms, with the ways in which both Dahl and Neal deal with their different reactions to their daughter’s death ranging from questionable to just plain unsympathetic. Dahl in particular is portrayed as not the easiest person to deal with in his sorrow; he turns to drinking as one means of coping, which leads to a fouler temper around his wife and surviving children, at one point turning a hopeful piece of constructive criticism from her end into a full-blown outburst, and at another point even leaving his children alone in a burning kitchen while he goes to bed in a catatonic state. However, given what some of us know about Dahl’s truer, much more bigoted nature, even this depiction feels like it’s a much more streamlined version of the truth, because once again it wouldn’t appease the children to learn that one of the most beloved children’s authors of all time was prone to antisemitic outbursts. Regardless of that, and despite a well-cast Hugh Bonneville’s attempt to give his rendition of Roald Dahl a bit more of a hearty nature, the material can’t help but feel all too safe for it to truly leave an impact.

The film’s approach to grief appears to really just boil down to these two adults, once happy in their relationship, bickering endlessly and being uncharacteristically cruel to one another. Obviously, a film like To Olivia isn’t going to be the definitive on-screen portrayal of sorrow and depression, but when that’s all that it seems to be focused on, there needs to be a bit more depth than just a simpler “he’s moping, she’s moping” set of montages. The only time when the film really, actually feels like it’s getting somewhere with this is when the couple visits Dahl’s old headmaster, now the archbishop of Canterbury (played by the late Geoffrey Palmer, in his final film role), who flatly dismisses their claims that Olivia’s heaven has animals for her to play with, leading to a scene directly after where they’re laughing away at the bizarre declaration, before a sudden and powerful outpouring of tears from one of them. Having had people close in my life who have also gone through a similar grieving process, to then suddenly let it all out in one fell swoop, this scene really stuck out because it actually felt like it was capturing what it really can be like to be overwhelmed with emotion after failing to initially react.

Other than that, the film sadly has a ring of sensationalism to it, in the sense that a lot of feels like it’s been greatly exaggerated to match the emotional demands of the filmmakers, when in reality it could well have been as uneventful as a brisk walk to the local park. There’s no doubt that everyone went into this with the best of intentions – a timely post-script even notes Dahl and Neal’s efforts to promote vaccinations, since there wasn’t one available that could have saved Olivia from her fate – but the material feels too streamlined to feel genuine, and too family-orientated to explore further, deeper levels of grief that they refuse to show here for the children’s sake.

To Olivia is perfectly fine for a Sunday afternoon viewing – which is probably why it’s debuting via Sky Cinema, since it has a slight made-for-TV quality to it – but you’re likely to get more depth out of Roald Dahl’s actual books than this film.

To Olivia undermines its good intentions with a basic and all-too-safe depiction of grief, which muddles characters’ questionable and often unsympathetic actions under a glib pretence of feeling sad, without going any deeper into its effects on both Roald Dahl and Patricia Neal in ways that prove satisfying to all.

To Olivia is now available on Sky Cinema and NOW TV.