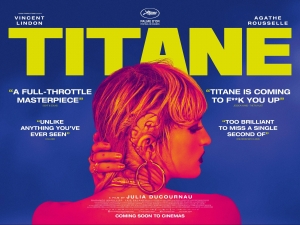 BASICALLY…: A dancer (Rousselle) with a strange attraction to cars, and a deadly hobby, finds herself in an unexpected situation…

This review of Titane was conducted as part of the BFI London Film Festival 2021.

You probably know this already, but Julia Ducournau’s Titane is not for the faint of heart.

That, however, isn’t going to stop me from giving my thoughts on the movie anyway, and it’s… well, it’s something alright. It’s perhaps not the completely mad spectacle that the hype has suggested, but Titane is certainly a unique movie that represents a filmmaker at the height of their demented vision.

The film opens with a young girl named Alexia (Adèle Guigue) being involved in a car accident on account of her backseat brattiness, and having a titanium plate placed in her skull as a result. Years later, Alexia (now played by a fearless Agathe Rousselle) is a dancer performing at car expos, but secretly operates as a serial killer who preys upon numerous people from creepy stalker fans to vulnerable young dancers. In between a couple of killings, though, she ends up having a very strange sexual encounter with a car – it happens – and, in the most surprising development, actually becomes pregnant from it. She is forced to hide her rapid new pregnancy when she has to go on the run, and has to disguise herself as the missing son of a tortured fireman named Vincent (Vincent Lindon) in order to hide out.

From the plot alone, which sounds like an extreme blend of American Psycho and Some Like It Hot crossed with a David Cronenberg body horror flick, you may be either entranced or completely weirded out. Ducournau’s film, however, doesn’t care which side of the aisle you are on, because it is far more concerned with just being its outlandish self in however many ways possible. Like with Raw, Ducournau exhibits an astonishing confidence in her ability to shock, confound and possibly even emotionally engage with the audience, which is earned through some seriously provocative and tough-as-nails imagery that will have you both mesmerised and wincing away from the screen in equal measure. I’ll admit that there were at least a couple of times when even I had to watch Titane through my fingers, during moments when I was pretty sure that somebody on-screen had legitimately done something to themselves on the actual set and Ducournau just kept it in the movie; while that is unlikely to have happened, and it’s all just impressive make-up work and impeccable sound design, given the hardcore nature of the movie itself it would not be completely out of place to hear that this was actually the case. Whether or not you can handle the intense violence, surreal body horror and, of course, all the stuff they do with cars in this film, it boils down to how much you can stomach such sinister imagery. I was able to make it through well enough, though based purely on the hype a part of me was perhaps expecting much more batty stuff to happen (though don’t get me wrong, it most certainly does) than what we actually do get.

What ended up disturbing me a little more than even the stuff with her monstrous and rapidly inflating pregnancy – which is certainly rough to look at – was Titane’s view on gender politics, and by that I mean the stark contrast between toxic masculinity and even radical femininity. Nowhere is either category more personified than the central relationship in the film, which is by all accounts pretty messed up; you have Alexia, the brutal serial killer who lures in victims with her brazen and outspoke sexuality, and then there’s Vincent, whose missing son is who she disguises herself as to hide from the authorities. Vincent is, to put it lightly, just as much a damaged soul as Alexia is, possibly even more so; in his grief, he has become a steroid addict, constantly shooting doses into his backside which has given him not just a grotesque body figure but an abrasive and bullish personality that his extremely machismo role as a firefighter only exacerbates. His possessive nature around his “son” often makes him seem that much more of a threat than even the serial killer, but in a twisted way it proves to be a source of comfort for the emotionally detached Alexia, who quite possibly for the first time in her warped life has found the closest thing to a soul mate that she can get. Ducournau subtly, and rather cleverly, deconstructs both male and female gender roles in her film, allowing both to indulge in some disturbing activity while also letting them rediscover the humanity that both these characters desperately need.

You can certainly watch Titane and only take away from it the insanity of its premise and imagery – its finale alone is one for the books – but Ducournau also provides thoughtful commentary on what it means to be not just male or female, but profoundly human, to prevent it from just being an onslaught of madness. It’s a perfectly entertaining genre movie with gusto, and refreshingly no intention of pleasing everybody who happens upon it; Titane just exists as its own bonkers entity, and it’s hard to fault it for going the full distance in appealing to those with the most titanium stomachs around.

Titane will be released in cinemas nationwide on Friday 31st December 2021 (as of publication).