Timmy Failure: Mistakes Were Made (Review)

Timmy Failure: Mistakes Were Made (Review) 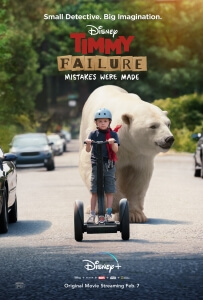 BASICALLY…: A young boy (Fegley) imagines himself to be the finest detective in town, along with his partner: an imaginary polar bear…

Following up a movie that won Best Picture at the Oscars is an insanely difficult task for any filmmaker in that position, so for Tom McCarthy – whose previous film, the excellent Spotlight, won the Academy’s top prize in 2016 – to go from Catholic Church cover-ups to imaginary polar bears is, at first, cause for concern. If you were to just read a basic synopsis of Timmy Failure: Mistakes Were Made, you’d probably think that McCarthy had lost his marbles; how could a director with an Oscar-winning movie under his belt suddenly go from high-calibre awards contender to a bizarre Wes Anderson wet dream all in one go? (Then again, he did direct the Adam Sandler misfire The Cobbler, so I suppose there is no such thing as rock bottom for this guy.)

However, once you actually make the time to watch the film on Disney+, you’ll start to pick up on the reasons why McCarthy chose this to follow Spotlight; this is actually a quirky, funny, and rather smart study of a child’s imagination, and how the unexpected circumstances of reality hit pretty hard for them, even when they don’t want them to. It just happens to have an imaginary polar bear as a supporting character.

The film follows the title character, a young boy named Timmy Failure (Winslow Fegley) who has set up a detective agency consisting of only two employees: himself, and a giant imaginary polar bear named Total. He and his fantastical sidekick go around solving local mysteries such as missing backpacks and mysterious deaths of class guinea pigs, using a Segway owned by his single mother (Ophelia Lovibond). His latest mystery, however, involves everything from purse thieves to Russian spies to the sudden disappearance of the Segway, but at the heart of it is a shocking revelation that even Timmy cannot comprehend: he must finally start to put aside his childish fantasies and grow up along with the other kids.

The film acts as a covert slice-of-life movie; what may seem like an eccentric tale of this young boy’s wild fantasies of detective work turns out to actually be a much more thoughtful investigation into both the positives and negatives of having such an overactive imagination. It’s established early on that Timmy’s obsession with solving case after case is having a bad effect on his education; he is behind on his school work, refuses to socialise with other students in his class, and causes his teacher (a constantly-on-the-verge-of-a-heart-attack Wallace Shawn) all sorts of frustration, because in his own world Timmy feels that it is all a waste of his valuable time. Beyond school, he fails to recognise the importance of having polite manners towards adults, even giving his mother’s well-meaning new boyfriend Crispin (Kyle Bornheimer) a hard time because, again, he doesn’t see them fit in his world order. By all accounts, Timmy is a selfish child, but children can be selfish by nature; he just happens to exert his selfishness in ways that try to hide a certain fear of growing out of his current habits, and where McCarthy – who co-wrote the script with Stephan Pastis, the author of the book series on which it is based – succeeds is by finding a reasonable balance between the bad and the good connotations of imagination. The main character’s fantasies certainly cause problems in the real world, but they are also heralded by people who see his creativity as a sign of potential greatness and uniqueness: “normal is for normal people” is a phrase repeated by several characters, and the film is smart enough to sing its praises but also caution against its over-excessiveness.

There are a further few dimensions that make the movie feel a lot more approachable than expected; for one, it is often very funny, with some sharp lines provided by McCarthy and Pastis every now and then along with some curt deliveries that give them a little extra sting. The central performance by Winslow Fegley is instrumental to a lot of this; for the majority of the movie, he speaks in monotone with vocabulary comprised of dialogue you’d hear from a classic gumshoe character from the 1940s, which certainly has the potential to be grinding to viewers’ ears, but unlike, say, the kids from Tim Burton’s Dumbo, the monotonous delivery actually has meaning and comedic appropriateness for the self-serious tone this main kid is aiming for, and more often than not it actually works in favour of the film’s off-kilter comedy. McCarthy also embeds some vivid visual humour which accentuates the bizarre anything-goes style he wants to achieve with this story, and again they score some unexpected laughs for eagle-eyed people who can catch them whenever they show up on the screen.

It is a stylish family movie that’s smarter than the average kid’s flick, though I will say it might be a little too dry for young children’s tastes; the way that some of the deliveries are done (especially with the main character) as well as the more grounded tone might not excite or entertain them as much as older audience members. If you’re willing to look past that, though, you’ll find this to be a rather nice surprise, and that Tom McCarthy did indeed choose wisely in the wake of Spotlight’s awards success – he should maybe have Timmy Failure stay as far away as possible from the environments uncovered in that film, though.

Timmy Failure: Mistakes Were Made is an amusing, funny, and surprisingly smart family movie that explores both the positive and negative sides of having an overactive imagination at a young age, which packs a slick grounded style to counteract its more thoughtful substance.