The Time Of Their Lives (Review)

The Time Of Their Lives (Review) 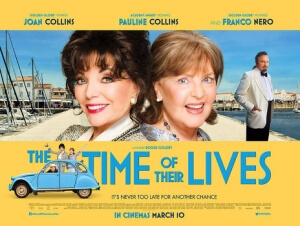 BASICALLY…: An aging actress (Joan Collins) convinces a timid housewife (Pauline Collins) to accompany her on a cross-country trip across France…

I haven’t had the time of my life, and I owe it all to this garbage movie.

After you’ve gotten that classic Oscar-winning song out of your head, you’ll be disappointed that The Time Of Their Lives is a wretched and piss-poor excuse for a film, let alone one for a more geriatric audience who deserves far better than something like this.

It tells the contrived story of an aging film star (Joan Collins) who convinces a timid housewife (Pauline Collins) in a loveless relationship with her controlling and bullying husband (Ronald Pickup) to spontaneously accompany her on a trip to France for a film director’s funeral. What should be a fun, laugh-a-minute road trip comedy that arises from that set-up turns out to be the most lifeless, pandering and sometimes incompetent excuse for a holiday in the South of France if there ever was one.

Now, I know that I am absolutely not the target audience for this film – I was the youngest one in the screening by at least twenty-five years – but that doesn’t mean it gets a free pass for being terrible just because it’s made for older people. Middle-aged couples, grandmothers, or even lonely spinsters deserve a far better theatrical experience than something that constantly talks down to them, exhibits a stale sense of humour that only the elderly would chuckle at, and offers scenarios that would be too far-fetched and ludicrous for even the Best Exotic Marigold Hotel films to try and pull off. Even the Collinses, both Joan and Pauline, deserve far better than this, as both of them are stuck in one-dimensional roles that play to their own personas that never allow them to be actual characters; Joan is playing an aging, washed-up starlet desperate for the spotlight once more (what a stretch!), and Pauline is a mild and reserved woman who seems too afraid to take huge risks, and also plays one in the movie. Let’s also spare a moment for poor Franco Nero’s sake, who aside from being mostly wasted in a stock love interest role, gets the dishonourable distinction of having his manhood out for the unsuspecting audience to see not once but twice in the same scene; let’s be honest, no matter what age you are, the sight of aging Italian actor Franco Nero’s genitals and sagging buttocks is one that nobody should ever have to see in a comfortable cinema.

Writer-director Roger Goldby, known mainly for television shows like Cutting It, Hustle and Call The Midwife – and to date has also made one other film, 2007’s The Waiting Room with Anne-Marie Duff – is not only responsible for the ungodly irritating carnage on display here, but is also unable to at the very least make it a pleasant film to experience, as a lot of the direction is terrible with actors seeming lost with their own motivations at times, and scenes will just abruptly end without a punchline or even a point. The film’s ending makes it feel very incomplete, with at least one major plot thread just dangling loose in front of our very eyes, and a lot of character arcs just abandoned or wrapped up hastily just so the end credits can get here as soon as possible. Goldby’s skills as a writer are also something to be admired, if entirely for the wrong reasons, as the script relies heavily on contrivance after contrivance, from quite possibly the worst border security in the world when the two women need to sneak onto the ferry that takes them to France, to a grossly hateful care home that Joan’s character is trapped in at the start of the movie, which – if this were to take place in any sense of reality – would be shut down in a heartbeat following an undercover Panorama investigation.

This is the kind of movie that only exists to be shown on BBC Two at two o’clock on a Tuesday afternoon, sandwiched somewhere in between Bargain Hunt and Pointless, and even then just as background noise for elderly people to complete their embroidery. Other than that miserable experience it is destined for, The Time Of Their Lives is an ungodly waste of time that nobody should ever be forced to watch with their lonely older relatives; for their sake as well as your own, put something far better on instead.

And it bears repeating, mainly because I love this pun sentence so much: I haven’t had the time of my life, and I owe it all to this garbage movie.

The Time Of Their Lives is a lifeless, weary and utterly miserable drag that wastes talented actors in thin roles, with a script that has them be involved in one dumb and contrived sequence after another, which panders endlessly to its geriatric audience that deserves far better than this.