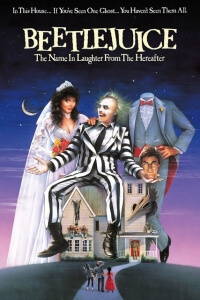 failure last year, he’s been busy sorting out where he goes from here. And one of the options is to return to the world of one of his most popular early films, the 1988 cult horror-comedy Beetlejuice.

Burton is in early talks to direct a sequel that is currently being written by David Katzenberg and Seth Grahame-Smith, and leading actor Michael Keaton is also being sought after to reprise his role as the title character.

The original film saw Keaton play an obnoxious underworld “bio-exorcist” named Beetlejuice hired by a recently-deceased couple (Alec Baldwin and Geena Davis) to scare away some unruly new tenants who have occupied their house. A short-lived animated series was spun off from it that ran from 1989-1991, and an actual sequel titled Beetlejuice Goes Hawaiian was planned in the early 90s with Burton once again attached to direct. Of course, that never came to fruition and it is unclear whether any elements from that failed project will translate into this new sequel.

It may take a while before Burton even comes around to Beetlejuice 2, however. Currently shooting Margaret Keane biopic Big Eyes – starring Amy Adams, Christoph Waltz, Danny Huston, Krysten Ritter, Jason Schwartzman and Terence Stamp – in time for a 2014 release, he is also pencilled in to direct an adaptation of Ransom Rigg’s gothic book Miss Peregrine’s Home for Peculiar Children, based on a screenplay by Jane Goldman, for 2015.

After something of a lacklustre few years with projects like Dark Shadows and Alice in Wonderland not receiving as much love as expected, perhaps returning to some old ground might be a wise option to help the director rediscover his creative roots. The last direct sequel he made was 1992’s Batman Returns, and although some see it as an uncomfortably dark turn in the Batman film chronology – as well as being indirectly responsible for the hiring of Joel Schumacher and therefore the infamous Batman and Robin – it was still a staple in Burton’s sense of visual wonder. After years of trying new things, it’s possible that the best thing for him would be to step back and place himself in an area where he feels more comfortable without necessarily re-treading old ground. Also, it’s likely that Johnny Depp and Helena Bonham Carter WON’T be involved, so it already sticks out from the crowd.

Whether Burton decides to direct or not, it will be an interesting experience to see Beetlejuice cause havoc on the big screen again. Check out a trailer below for the original 1988 film, and judge for yourself whether it’s a cult classic that deserves to be resurrected.