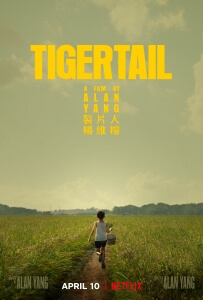 BASICALLY…: A father (Ma) reflects on his decision as a young man (Hong-chi) to move from Taiwan to America for a new life…

With the critical and commercial success of films like Parasite and The Farewell, as well as the promise of future blockbusters like Mulan and Shang-Chi and the Ten Rings, Asian culture has become more accepted in modern Western cinema than ever before, which is both a long time coming as well as a healthy acceptance of other ways of life than our own. Although, it’s not entirely fair to call it a phase or even a trend; filmmakers from several corners of Asia like China, Japan, South Korea and Taiwan have been active for many years now, and only now are they starting to receive the attention they deserve because of the success of those other movies, which can only be a good thing since there’s far more lucrative stories to tell from this part of the globe which us Westerners won’t get too bored by.

One such story is that of Tigertail, written and directed by Alan Yang – best known as a writer on several comedy shows like Parks and Recreation, The Good Place and Master of None – who here turns in a much more serious interpretation of his own personal experiences with family, which makes for a compelling slice-of-life movie that is simply gorgeous to watch as well as quietly heart-breaking.

The main character of the film is a man named Pin-Jui (Tzi Ma), a middle-aged Taiwanese man living alone in New York. He struggles to maintain an emotional connection with his former wife Zhenzhen (Fiona Fu) and especially their grown daughter Angela (Christine Ko), but as we see flashbacks of Pin-Jui as a young man (Lee Hong-chi) growing up in Taiwan, a clearer picture starts to form of him. As we learn, Pin-Jui was originally in love with a woman named Yuan (Yo-Hsing Fang), despite him coming from a poorer household than her, but soon an opportunity arises for him to go and make a new life in America, the catch being that he must agree to marry young Zhenzhen (Kunjue Li) who he has almost no connection with whatsoever. Soon, the two mismatched lovers are transported to a dingy apartment somewhere in New York, where they begin to make their new lives work until middle-age, when Pin-Jui begins to reminisce on the choices he made back then.

You get the feeling that this is a deeply personal project for Yang, not just because of the semi-biographical elements lifted from his own father’s life (who apparently led a slightly more prosperous life than Pin-Jui does, becoming a doctor instead of a grocery store manager), but because it manages to capture what a raw experience it must have been for him and countless others to emigrate to America to a comparatively backwards part of the world like Taiwan. In these flashback scenes – shot on a grainier 16mm reel of film, with modern-day scenes captured on smoother digital – we see Pin-Jui and Zhenzhen adapt to a new environment that is extraordinarily alien to both of them, with not just the language but the culture itself being entirely different to the stricter ways of life they are more familiar to, all on top of trying to make their unenthusiastic coupling work. There is something quietly powerful about seeing these two people, who clearly have no feelings for each other whatsoever, struggle to make their way in life within their new settings, and what Yang manages to capture rather well is the sheer uncertainty of it all. Both Pin-Jui and Zhenzhen, in their own ways, find that the patriarchal and submissive behaviours they have been programmed to feel in married life do not fit in well with the freer Western standards, and each become radicalised but also torn between their own cultural heritages; as a result of his loveless marriage, the once-jovial and spontaneous Pin-Jui becomes withdrawn and controlling, while the shy Zhenzhen starts to come out of her shell with ideas of becoming a teacher. Yang presents their individual uncertainties as captivating moral dilemmas, all the while honing in how the sharp change in their overall way of life is leading them to become mere shells of their former selves, for better or for worse.

Those sequences are where the film shines brightest, especially compared to the modern-day scenes which don’t quite reach the same level of emotion. A lot of it is delivered noticeably flat, with dry conversations between Tzi Ma’s adult Pin-Jui and Christine Ko’s Angela that don’t offer as much substance underneath the surface as those earlier flashbacks. The monotone is clearly deliberate, to show the stubbornness shared between both father and daughter, not to mention Pin-Jui’s rather cold treatment of her when she comes to him for emotional support, but it doesn’t always work to show the emotional depth of a scene, despite the strong acting from both Ma and Ko. It also feels a little bit like a late add-on to the movie in order to get it to ninety minutes, like it originally seemed to be missing a more meaningful coda which caused this to be included at the last minute (one also wonders what the scenes involving John Cho, who filmed several scenes for the film which were ultimately cut, would have added instead).

As a debut movie, for all its narrative bumps, Tigertail serves as a fine calling card for Alan Yang, and a fitting enough tribute to a very personal relationship he surely shares with his own father. It may not match Parasite or even The Farewell in terms of overall strength, but with Asian cinema finally getting that much-needed boost in our society it is a pleasing enough movie to discover.

Tigertail is a deeply personal and quietly powerful generational drama which sees writer-director Alan Yang take inspiration from his own father’s experiences to deliver a drama that shows the raw and uncertain immigration lifestyle, although a more monotonous present-day section prevents it from hitting all the right emotions.