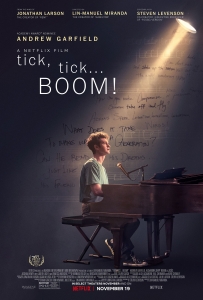 The great tragedy of Jonathan Larson, the composer most famous for his ground-breaking musical Rent, is that he never lived to see his work become a success; at the young age of 35, he died suddenly from aortic failure, the very evening before Rent would have its first public performance. However, director Lin-Manuel Miranda’s film adaptation of Larson’s earlier work Tick, Tick… Boom! does not dwell too hard on the heart-breaking end to his journey – in fact, the film is much more interested in exploring Larson’s ravenous creative process and own personal struggles with arrested development, narcissistic delusions of grandeur, and his own sense of accomplishment.

It’s all the better for it, as Tick, Tick… Boom! is a winning musical odyssey filled with life, love, and everything that makes Larson a legend among the theatre community.

Set in 1990, we meet Jon (Andrew Garfield) as he’s just a few days shy of his 30th birthday, which is causing him anxiety – personified by a constant ticking sound, which is where the title comes from – because, in his eyes, he has yet to become the great musical composer he’s always wanted to be before his 20s are up. His long-in-development musical, an ambitious but confounding sci-fi rock opera called Superbia, is about to be workshopped for the first time, but he’s yet to write a key song for the second act, and in between shifts working at a New York diner, his commitment to his girlfriend Susan (Alexandra Shipp), and endless bouts with writer’s block, time is quickly running out before both deadlines: that of the workshop, and that of his ascent into pure adulthood.

You don’t need to be a fortune teller to foresee how it’ll eventually pan out for the late writer, but the film makes it seem like such an out-of-reach objective for the characters in the moment that it does still leave you in doubt of the eventual bittersweet ending. For his first proper directorial gig – according to IMDb, his first credit as such comes from the 1996 film Clayton’s Friends which he made as a teenager – Lin-Manuel Miranda gets impressively deep inside the mind of a tortured genius, showing the world through Larson’s, and by extension Miranda’s, creative perspective that’s at once chaotic but also full of life and, indeed, music. Miranda once portrayed the role of Jon in a 2014 stage revival of Tick, Tick… Boom!, which gives him a slight advantage in exploring this character more in depth, but his assured direction incorporates a strong sense of style that makes good use of techniques found in both film and theatre (the framing device takes the form of the musical’s original staging, with Garfield’s Larson performing onstage with a band and two other performers), making his film a neat and assured combination of both.

There’s also the fact that Andrew Garfield’s central performance is thoroughly absorbing; in the wrong hands, Jonathan Larson in this film could have easily been an absolutely insufferable protagonist, but Garfield wisely finds the passion and heart-break inside of a charming but fundamentally flawed human being, whose self-centred neuroses threaten his relationships with girlfriend Susan (a pitch-perfect Alexandra Shipp) and childhood best friend Michael (Robin de Jesús, whose emotional turn ends up being the film’s secret weapon). Garfield is bursting with life and frustration all throughout the movie, accompanied by Miranda’s stylish direction which honours both his strong screen presence and his fine singing voice to often powerful effect. There are fun small roles throughout, including Vanessa Hudgens and Bradley Whitford (the latter portraying Stephen Sondheim), and even Miranda manages to work in a couple of noticeable cameos for himself and a couple other Hamilton alumni, but this is purely Andrew Garfield’s time to shine, and he’s more than up for the task of basking in the spotlight.

Ultimately, this is a very enjoyable and emotionally rich movie musical, brought to the screen with passion by people who clearly love not just the material but also the short life of the man who created it. Miranda pays solid tribute to Jonathan Larson’s unique contribution to theatre with a film that is itself a fierce love letter to the stage, with Andrew Garfield’s magnetic turn capping off the sensitive portrayal of a musical genius. It firmly solidifies the legacy of a composer who may not have lived to see his work become the game-changer that it would end up being, but is remembered fondly by enough people to eternally last among the giants of theatre.

Tick, Tick… Boom! will be available on Netflix from Friday 19th November 2021.