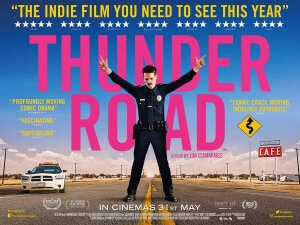 BASICALLY…: A police officer (Cummings) experiences a nervous breakdown following the death of his mother, and leading up to his divorce which could see him lose custody of his young daughter (Farr)…

You don’t need millions to make a compelling piece of drama – just ask Jim Cummings, who not only stars in Thunder Road but also directs, writes, produces, co-edits, provided ukulele instrumentals to the musical score and even worked on the visual effects, and did it all with a budget of roughly $200,000. That’s basically how much a standard Hollywood production would probably spend on craft services, and Cummings used that amount to make a strong showcase for his acting, writing and directing talents – often all at the same time – that much bigger-budgeted movies could only dream of having.

The film is based on Cummings’ short film of the same name from 2016 (when it debuted at Sundance, and came home with a Grand Jury Prize), with the feature’s first twelve minutes being an exact replica of the short; a single uninterrupted take as Texas police officer Jim Arnaud (Cummings) gives an increasingly awkward eulogy for his mother, which ends with him dancing along to Bruce Springsteen’s song “Thunder Road” in complete silence when the CD player refuses to work. From this first scene onwards, it becomes painfully clear that Jim is going through a very tough time in his life; on top of his mother dying, he’s going through a bitter divorce from his wife Rosalind (Jocelyn DeBoer) who’s applying for full custody of their young daughter Crystal (Kendal Farr), and despite being advised to take some time off he’s still on patrol and acting out at various stages in several situations. The one thing he seems to have is his connection to young Crystal, and even that is starting to become strained as she blossoms into tweenhood, wearing make-up to school and hanging out with a boy she likes. The whole thing is, essentially, one great big mental breakdown for this guy who’s had one rotten thing in his life after another, and you’re just waiting for the final string to be pulled that will simply make him explode at last.

However, against all odds, you’re completely hooked on his downfall. It is certainly uncomfortable watching someone who clearly needs all the help he can get just melt down in front of everyone he holds dear, but Cummings has enough restraint as a writer and director, and especially as an actor, to prevent it from being fully unwatchable. Instead of succumbing to the trappings of misery porn, the director lets us see the funnier side to the awkwardness with smoothly paced scenes that feel natural in the delivery and are believable enough to get a few uneasy laughs despite the heaviness of the situation. Through that whole opening sequence, you see this guy break down in tears multiple times, yet his attempts to remain level-headed despite being nothing of the sort are beautifully tragicomic; it’s a similar format for later scenes, when he breaks down during a meeting with his daughter’s teacher (Macon Blair) where he nearly throws his daughter’s desk across the room, and during a very heated argument with his fellow officers which sees the character literally stripped down to his barest essentials. The whole time, you’re left with this incredibly awkward feeling in your stomach as things get worse and worse for this guy, but Cummings is such a compelling actor – as well as writer, director etc – that he makes the unravelling of his character seem like a pure rollercoaster ride of emotions and humour rather than just a meandering basket case of pity and depression.

It’s really hard to talk about anything or anyone else outside of Cummings with this film, because he is, of course, the undisputed champion of this project. There have been many filmmakers out there who have taken on multiple roles in the production of their own movies – on the higher end of the spectrum you have people like Charlie Chaplin and Orson Welles, and on the lower end there’s Tommy Wiseau and Neil Breen – but so few of them have pulled it all off in one debut feature made for a significantly lesser budget than most (for comparison’s sake, Welles’ Citizen Kane was made for four times as much as this movie, and even Wiseau’s The Room cost a total of $6 million to make) that it’s all the more applaudable when you see how compelling and well-executed it all is. In lesser hands, this movie could have come across as one great big vanity project, but Cummings is smart to give his character a real sense of pathos and even a pathetic nature to him that prevents the character and his journey from being pure wish fulfilment for the writer, so we not only are able to identify in some part with this guy but also empathise with him as he continues his descent into emotional madness. It’s a truly unbelievable accomplishment that he did all of these things with this film and still managed to make it a truly engaging piece of drama, all with the micro-budget that he had to work with, so massive props to this guy who delivers one hell of an opening statement for his acting, writing, directing et al careers.

This is a movie that will have you laughing, crying, feeling uncomfortable and even overjoyed in places, from its tough-to-stomach on-screen breakdowns to sweet and meaningful games of pattycake with his daughter, but most of all you feel the unquestionable passion behind this project. You can sense it in Cummings’ writing, his direction and especially his acting that this is a story and character who’s very close to his heart, and he executes this potentially disastrous study of a nervous breakdown beautifully and with serious weight to it that many other debut filmmakers would be truly envious of. That alone makes this a fascinating, and entirely successful, showcase for a guy who’s proven he’s got stories and a half to tell the world, and this is only the bright and fiery start of them.

Thunder Road is a compelling and wonderfully executed showcase for actor-writer-director etc Jim Cummings, who manages to find the humour in some increasingly awkward and uncomfortable situations while never sacrificing the pure heart and passion that he put into this project, and it is an impressive little film that more people should seek out.

Check out Thunder Road showtimes in London
on Walloh.