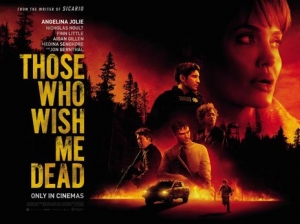 BASICALLY…: A firefighter (Jolie) must protect a young boy (Little) from being killed by assassins…

For all of his acclaim as a screenwriter, Taylor Sheridan has faced a slightly more mixed reception as a director. While his sophomore directorial film Wind River was an effective little thriller, one that very much fell into his own brand of storytelling that his scripts for Sicario and Hell or High Water exemplified, his debut feature technically came in the form of a little-seen and critically-disapproved 2011 horror called Vile, a movie that even Sheridan himself has admitted in interviews he was credited as director for because he was just helping his less-experienced colleagues out.

His third (or second if you asked the man himself) film as director, Those Who Wish Me Dead, is undoubtedly much more of a Taylor Sheridan movie than Vile was, but although it has quite a few moments of awesomeness, it’s also a far more preposterous and downright sillier plot he’s working from here, which means that it rarely hits the same grounded tone as Wind River previously did. That being said, it’s certainly not a boring film either, with some hugely intense sequences where you have absolutely no idea what’s going to happen, or even who’s going to make it out alive.

Set in the forest domains of Montana, our de facto lead character is Hannah (Angelina Jolie), a firefighter who’s been assigned to a monitoring station after a traumatic loss of life during a previous forest fire. Meanwhile, a young boy named Connor (Finn Little) is running for his life after a pair of assassins (Nicholas Hoult and Aidan Gillen) are hunting him down after killing his father (Jake Weber), who had uncovered some shady financial information about a cutthroat mob boss (Tyler Perry, making the most out of his one scene in the entire movie). Hannah and Connor’s paths eventually cross, and soon she protects him from the inevitable onslaught of the ruthless assassins, who have also ignited a quickly-spreading forest fire to distract the authorities from their hunt. Also caught up in the affair is local sheriff Ethan (Jon Bernthal), Connor’s uncle-in-law and Hannah’s ex-boyfriend who’s since found happiness with his pregnant wife Allison (Medina Senghore), but this being the kind of movie that it is, there’s an aching feeling that their happiness is going to be short-lived.

It should perhaps be noted that while Taylor Sheridan does indeed provide screenplay duties in addition to directing, he’s also sharing writing credits with Michael Koryta (whose book of the same name is adapted here) and Charles Leavitt of films like Blood Diamond and In the Heart of the Sea. Because of that, you could logistically pin a number of Those Who Wish Me Dead’s many overblown tendencies in its plot and other script aspects on either one of these additional writers over Sheridan, since a lot of the time there are wild leaps in logic and typical action movie dialogue that do not match the style and tone of something like Sicario. There are definitely a number of times when you can sense Sheridan’s unique voice seeping in, from some of the enjoyable banter shared between characters to extremely taut moments of suspense where, again, you have absolutely no idea who is going to survive or be killed at any given moment, but most of these moments are drowned out by a rather convoluted plot where you’re struggling to make sense of some of the liberties that the villains are taking, and perhaps a less sensible positioning of who we’re supposed to be primarily following as our lead protagonist.

With regards to that last observation, I feel that if the movie made any sort of mistake, it was making the Angelina Jolie character the lead. While the actress does some fine work here, some of her strongest in a long while, her character is one that you’ve seen a bunch of times in movies like this – the hero who’s haunted by memories of those she couldn’t save, and is somewhat withdrawn from society as a result – and it’s much less interesting than the majority of the other characters. One quick rewrite, and Jon Bernthal’s sheriff character could have been the lead; he’s much more prominent, charismatic as hell, has a very likeable relationship with his wife, and he even has much more of a connection to young Finn Little’s character than Jolie ends up having (he’s technically a distant relative to the distraught waif). He even has a lot more screen-time with the villains of the movie, both of whom are amongst the more intimidating and legitimately threatening bad guys seen in a movie for a long time, especially Aidan Gillen who has some absolutely brutal moments where you’re just wincing at the sheer cold-heartedness of it all. This movie does have a lot of really good performances across the board, by an ensemble cast who more than keep this otherwise ridiculous plot afloat, but seriously the simplest change in this script of favouring Jon Bernthal’s character as the lead over Angelina Jolie’s really could have made this a much more solid film.

Sheridan the director does have a keen eye for intense violence which he uses all throughout – people get mercilessly shot in every crevasse, punched within an inch of their lives, and even have the right side of their faces burnt off – which more often than not does achieve the uncomfortable vibe it’s clearly aiming for. As with Wind River, he certainly has a knack for showing just the most brutal things a person can do to another person, and rarely shies away from how gory some of it can get, although in the case of Those Who Wish Me Dead there is a sense that he is stretching how far he can take his grounded sensibilities, particularly when he has to incorporate some rather blatant CGI fire into the mix. Nonetheless, it’s still got a decent entertainment factor from its cast and some of the awesome things a number of them get to do, and no matter how ridiculous or implausible the plot can get, it’s rarely ever boring.

I guess you could just barely call this two for two in Taylor Sheridan’s directorial career (or two out of three, if you’re really including Vile in the mix).

Those Who Wish Me Dead has some entertainingly brutal moments performed by a very strong ensemble cast, but the script co-written by director Taylor Sheridan often struggles to replicate his more grounded trademark tone.

Those Who Wish Me Dead is now showing in cinemas nationwide – find a screening near you right here!