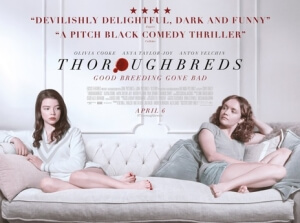 BASICALLY…: Two childhood friends (Taylor-Joy and Cooke) reunite and come up with a dark way to rid themselves of a particularly nasty figure in their lives…

Imagine if Peter Jackson’s Heavenly Creatures was directed by The Lobster’s Yorgos Lanthimos, and all of a sudden Thoroughbreds is quite easy to visualise.

Of course, writer-director Cory Finley’s debut feature never gets as full-on weird as The Lobster did, but it does maintain a similarly dry approach to its dark overtones, which in this case benefits the film by adopting an emotionless and almost robotic delivery in the matter-of-fact dialogue and monotone delivery by the actors, but it doesn’t feel like it’s there for any kind of stylistic choice either. Instead, this is a dark and dry but also entertaining black comedy about a couple of teen sociopaths who against everyone’s better judgements – even their own, at times – make for an effective duo.

These two adolescent figures are Lily (Anya Taylor-Joy) and Amanda (Olivia Cooke), who hail from the same affluent Connecticut suburbs and used to be close friends when they were younger, but not so much anymore. It’s only when Amanda commits a disturbing act of animal cruelty that they reunite under the pretence of Lily tutoring her, although Amanda is quick to correctly assume that Lily is being paid by her mother to do so. They do eventually reconnect with each other, especially over their shared disdain for Lily’s emotionally abusive and all around prick of a step-father Mark (Paul Sparks), which Amanda nonchalantly suggests one evening that he probably needs to go away for good. This sets off a series of escapades where the two girls work together to figure out the best way to essentially kill Lily’s step-dad, which includes hiring wannabe hustler Tim (Anton Yelchin, in his final performance before his untimely death in 2016) to commit the deed for them.

As strange as it may seem, this isn’t the kind of movie that throws in twists and turns at every given second; there are no sudden rug-pulls or hidden agendas on account of the characters or the filmmakers, it really is as straightforward as it can possibly get. This makes the situation a tad more realistic, and shows that these girls may be smart, but they are certainly underprepared for such a huge task, even Amanda who straight up confesses she is a sociopath from how she displays no real emotions whatsoever. In fact, the movie as a whole isn’t really about their murder plot; it’s much more about these two extraordinarily damaged young people uniting for a warped cause, but in doing so really exposes their cold and maniacal tendencies underneath their beautiful and wealthy exteriors. Taylor-Joy and Cooke are great in their respective roles, both getting across their individual problems with self-loathing or struggling to fit in to the world with strongly controlled emotion, or in Amanda’s case none at all, and seeming like a couple of deranged and wildly insecure people that you find yourself weirdly drawn to, no matter how disturbing their psychoses reveal themselves to be.

Finley directs his own script with just as much poise and focus, with every single scene and line of dialogue not feeling too out of place or wildly off focus with what the movie should first and foremost be about. Even the diversions with Yelchin’s character remain vital to the plot, even when they don’t seem at first to have much relevance outside of him being a means to an end for the girls, and while we’re on the subject, watching Anton Yelchin in this movie really reminds me of how great a talent he truly was, and how in everything I’ve seen him in – including this, which for an (unintentional) final performance is a strong one to go out on – he really gave his all into whatever little role he was given. What happened to him was an unspeakable tragedy, and he will be sorely missed by admirers of his work all around the world; the film ends with an “In Memory Of” title card, and if you’ve ever seen any of his other movies, you will instantly see why he was a talent worth remembering.

Overall, this is an interesting movie to experience; you’re weirdly captivated by the dry sense of humour and monotone deliveries, as well as the lengthy one-shot takes of people just wandering about, and at the same time you’re not put off by any of it, but rather intrigued as to where it’s all going to lead from where it all kicks off. I can certainly see this not being everyone’s cup of tea, given its pretty dark and twisted view of the world – a climactic scene is perhaps the most chilling one-take scene of its kind since the climax of Lady Macbeth – but this is a stylistic and enjoyable warped teen alternative to Lady Bird.

Thoroughbreds is a stylistic and twisted dark teen comedy that’s made enjoyable by its realistic portrayal of its characters, played excellently by Anya Taylor-Joy and Olivia Cooke as well as Anton Yelchin in his final on-screen performance, but it might get a little too dark for everyone to enjoy.