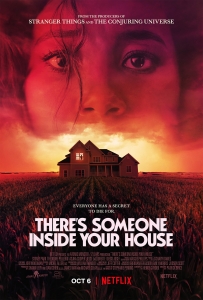 BASICALLY…: A killer begins stalking high school students on the verge of graduation…

Following their success with the Fear Street trilogy earlier this year, Netflix continues to take a stab (no pun intended) at the slasher horror subgenre with There’s Someone Inside Your House, a movie which comes from producers Shawn Levy and James Wan, and director Patrick Brice who wowed critics with his psychological chiller Creep and its sequel (with a third currently in pre-production).

Those are quite the credentials for such a movie, and honestly it’s the most noteworthy aspect of an otherwise straightforward slasher which, unlike the Fear Street movies, oddly lacks ambition in both its storytelling and its themes. There are, however, a few things about it which do make it a slightly easier sit than the recent Netflix slasher trilogy, but not enough to completely forgive its strange banality.

The film is set in a quiet town in Nebraska, where a masked killer has begun killing students at the local high school and sharing their secrets with the world, all while wearing a mask that is made to look exactly like the victim. A group of outsiders, including recent transfer Makani (Sydney Park) who naturally has a dark secret of her own, attempt to survive as the killer makes it way through the inner workings of the school, while Makani’s on-and-off-again boyfriend Ollie (Théodore Pellerin) is constantly thrown into suspicion due to his lowly attitude around others.

To begin with, for a film titled There’s Someone Inside Your House, we don’t spend a lot of time in people’s houses. Most of the kills, aside from a couple of key ones, take place far away from anyone’s home, and often in very public places where their deaths are made extremely apparent. However, it’s easy to see why they went with such a title in the first place, because this film is clearly trying to ape the style of classic slashers you’d find in the 1980s, many of which had titles like He Knows You’re Alone or Happy Birthday To Me, or any other kind of ominous-sounding name. The similarities don’t end there, with its synth-heavy soundtrack and its cast of archetypical high school types all feeling very standard of that era, which director Brice clearly has a fascination for otherwise he wouldn’t be trying so hard to pay homage to those types of movies with this one.

The problem is, though, for something that is clearly supposed to be a homage, it’s not an especially great one. Movies like Scream and You’re Next work because not only do they have fun with the standard slasher movie conventions, but they also work them into strong plots with good characters who you don’t really want to see die along with themes which can still resonate years after their release. There’s Someone Inside Your House, unfortunately, doesn’t have a lot of those things; some of the characters are fine, and are honestly more likeable than some of the ones in the Fear Street trilogy, but by and large each and every one of them is there to just serve a singular purpose and nothing more, with some of them drifting in and out so much that you even forget that they were characters to begin with. The film opens with one character being ostracised because he’s been exposed as gay, and he ends up joining the main group of outsiders (who really are just the typical teen slasher outsider characters with not many other dimensions to them), but despite being set up as though he’s going to be a main character he quickly falls into the background in lieu of the film’s true protagonist.

If it doesn’t entirely work as a character-driven piece, or even a plot-driven one – it’s not entirely surprising who turns out to be the killer by the end, with it feeling more like a shrug of a reveal than a truly shocking one – how about as just a slasher movie? It’s fine enough, with some pretty bad people getting axed off in gory fashion, but it’s not as instantly memorable as something like a Friday the 13th or Halloween film. Obviously, it’s unfair to compare this much smaller-scale slasher movie to one of the classics, but any movie of this variety should at least have some kind of memorable quality to it, even if it’s minor, and when your film struggles to leave some kind of impression outside of a few bloody kills and who’s involved behind-the-scenes, then you know it’s not going to end especially well. It does try to spark political debate surrounding cancel culture, class action warfare, institutional racism and other hot-button issues, but so often are they drowned out by routine slasher tropes and soapbox dialogue which sounds like someone dramatizing a tweet rather than anything natural. It’s not quite as obnoxious with this as the 2019 Black Christmas remake was, but it’s also not going to win any points for tacking Big Important Issues in a smart or interesting way either.

File this one under “Yet Another Teen Slasher Movie”, and call it a day.

There’s Someone Inside Your House is an archetypical teen slasher movie, with a thin plot, standard characters and routine kills making up most of its oddly unambitious running time.

There’s Someone Inside Your House is now available on Netflix.