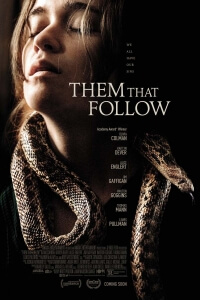 BASICALLY…: Mara (Englert), the daughter of a sect of snake handlers, finds her faith and loyalty tested when she receives unexpected news…

Ophidiophobia, or a fear of snakes, is apparently present in 52% of the British population, making it the third most common phobia in the country. Maybe that is why Them That Follow, in which serpents are not only shown frequently but also tie heavily into the plot, is not receiving that wide of a release over here; I can only imagine that more than half of UK audiences wouldn’t even dare venture out to the cinema were this showing on as many screens as Frozen 2, because, well, they’re freakin’ snakes, and snakes are intimidating little bastards at best.

So, if you do have a crippling fear of snakes, then you’d be better off probably not checking this movie out, because everything you probably suspect them to be will probably be confirmed by this movie. For anyone else who’s brave enough to stomach their very presence, you’ll get a decent slow-burn of a thriller that’s carried by some strong performances, but slightly undermined by a script that perhaps doesn’t get as deep into its themes as it likely thinks it does.

Our main character is Mara (Alice Englert), the young daughter of Pentecostal pastor Lemuel (Walton Goggins), who presides over a secluded sect that takes Bible passages regarding snakes a little too literally, incorporating them into rituals designed to wash the devil away. Mara faces a personal crisis when she discovers she is pregnant, from former congregation member Augie (Thomas Mann) who has since left the church, which is made further complicated when she becomes betrothed to parishioner Garrett (Lewis Pullman), to her domineering father’s pleasure. When a tragedy soon engulfs the community, she is thrust into a position where she must finally decide what to do with herself.

Although sold as a thriller with some subtle horror movie vibes – again, those snakes can be freaky SOBs – it’s really more of a drama with thriller aspects, with a far more sombre tone as we see more and more of what life is like in this particular community. Beyond the snake handling rituals, an illegal practise which we learn has caused the authorities to keep a close eye on this sect, we see that they have traditions that frequently put women in degrading positions – Mara is not allowed to wear her late mother’s dress for a formal occasions, she is made to wash Garrett’s feet at one point, and women are not even allowed to drive – and could potentially cause genuine harm, with the mere act of seeking a hospital when in mortal danger seen as wrong in the eyes of their Lord. It’s disconcerting, of course, but oddly intriguing in terms of where this could all go when drama strikes, something that debut filmmakers Britt Poulton and Dan Madison Savage certainly have an idea of, and through some taught and often uncomfortable direction they at least offer a suggestion that this is all leading somewhere truly profound.

However, while the intent is definitely there, the execution suggests they don’t quite have the means to take us there in the most satisfying of ways. The story is told in such a sluggish pace that by the time stuff actually does start to happen, it’s way past the point where you should have started caring, and it feels like all of a sudden the film has shifted into fifth gear when before it was merely coasting in first, leaving you with surprisingly not a lot of time to comprehend much of everything that’s abruptly being thrown at you. Character motivations in this movie are at times odd, with the main character acting rather passive through most of it but then suddenly developing a backbone in scenarios that don’t feel all that called for; other characters such as Olivia Colman’s fanatical church devotee and Kaitlyn Dever as Mara’s lonely young friend will say and do things which feel wildly out of character but are convenient for the plot to move forward, resulting in little consistency on a script level that undermines the noble efforts of a solid cast.

That cast is what really carries this movie, with strong performances by certified veterans like Olivia Colman, Walton Goggins, and even Jim Gaffigan in a rare serious role, as well as fresher faces like Alice Englert, Kaitlyn Dever, Thomas Mann and Lewis Pullman, the latter being especially intimidating as this snivelling creep that the protagonist unfortunately finds herself metaphorically tied to. They are all doing their very best with material that doesn’t always work, and it’s a real testament to their individual talents that they can not only make some of the stilted dialogue feel natural but also the weird shifts in their character feel real, albeit in an artificial sense. Plus, it’s always great to see phenomenal performers like Olivia Colman do something that’s not exactly within their wheelhouse, yet still make it work in their favour.

It is a movie that definitely has moments of merit, from a strong cast to some taut direction – not to mention some moody cinematography – but had it gone through at least one more stage in script development, it probably wouldn’t be as flawed as it ended up being. I applaud the filmmakers for their ambition with their first feature, but they probably needed a little more time to make sure their script isn’t as slippery as one of the serpents they’ve written into it.

Them That Follow is a decent enough slow-burn drama-thriller which benefits from a strong ensemble and some taut direction by first-time filmmakers Britt Poulton and Dan Madison Savage, but their script suffers from a sluggish pace that gets going a little too late, and odd character inconsistencies that further the plot but not the arcs of the people we’re supposed to be following. Best avoided if you suffer from a crippling fear of snakes, because those slippery little bastards are everywhere in this movie.

Want to decide what the movie’s like for yourself?
Check out Them That Follow showtimes in London
via