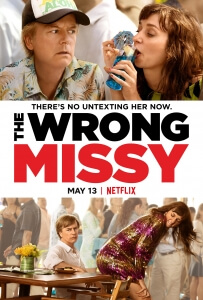 BASICALLY…: After meeting the woman of his dreams, Tim (Spade) invites her to his company retreat in Hawaii – only to realise he accidentally invited the wrong woman (Lapkus)…

When it was first announced that Adam Sandler’s production company Happy Madison had struck an exclusive distribution deal with Netflix, the majority of critics and audiences who had grown weary of seeing Sandler and his friends’ childish antics on the big screen breathed a sigh of relief. No longer would they be forced to watch the likes of Jack and Jill, Grown Ups, That’s My Boy or Pixels in the cinema, and could instead choose to ignore them as they’re quietly dumped onto the streaming service, with much less fanfare than if they went theatrical.

However, with cinemas currently closed due to COVID-19 and there being slim pickings to choose from in terms of new on-demand releases right now, ignoring the newest Happy Madison film is no longer an option, because it’s one of the only notable releases out right now that isn’t an early home premiere. This means, to my utter shame, I had to suck it up and watch The Wrong Missy, which reminded me of practically everything that is wrong with Happy Madison in one unappealing package.

Happy Madison regular David Spade stars as Tim, a meek businessman who has a chance meeting with a woman named Melissa (Molly Sims), and the two immediately hit it off after finding plenty in common with each other. When their first encounter ends abruptly, she forwards her number to him and they continue texting, and for Tim it reaches a point where he even invites her to come on his company retreat to Hawaii. However, on the plane, Tim receives an unwelcome shock; he actually sent the invite to another woman named Melissa (Lauren Lapkus), an off-the-rails lunatic with whom he had spent a horrific first date with some months prior, and now Tim has to make a good impression on his boss and co-workers while also reigning in his wild date.

Wacky hijinks, of course, ensue. Except, none of it is ever funny. In fact, it’s astonishing how unfunny this movie is, because its idea of comedy is having its actors constantly mug at the camera or shouting at the top of their lungs in the vain chance of scoring a laugh. It’s the exact same type of humour you would find in something like the Grown Ups films or Paul Blart: Mall Cop, the kind that panders to the lowest common denominator without any respect for the intelligence of both its audience or the actors they’ve roped into this. Lauren Lapkus is a talented comedian and actress who’s been both funny and endearing in other things, but her character in this is an absolute nightmare to a point where you even wonder how this woman can function at all in society if she constantly acts this crazy without taking a breather. You can tell that she is trying her hardest in the part, but this movie uses none of her natural charm and instead has her be this raving psychopath that nobody in their right mind would tolerate for even a minute, which makes later scenes where she’s noticeably calmer seem extremely out of character for her by that point. The movie wastes people like her and even David Spade (who, as we’ve seen, is not above the usual Happy Madison shtick) on material that requires them to do nothing more than act really obnoxious for an hour and a half, say some very hackneyed and trite dialogue, subject several others to endless physical and emotional abuse (a threesome scene sees one undeserving participant being constantly knocked about like an battered ragdoll), and acting out some extremely dumb scenarios which raise more groans than laughs.

The Hawaii setting obviously falls in line with a common complaint about Happy Madison movies being poor excuses so that the cast and crew can go on a luxurious holiday, and that very much seems to be the case here as well. In fact, Adam Sandler himself went to Hawaii in the equally-unbearable Just Go With It, and while Sandler doesn’t make an appearance in the film (though Sandler regulars Nick Swardson, Rob Schneider and even Vanilla Ice inevitably do) his comedic influence lingers on as the movie moves from one unfunny and appallingly stupid set-piece after another, except it can’t have been too hard for them because at the end of the day, they’re still hanging out at this sunny and luxurious Hawaiian resort that any normal person would be jealous of. However, they don’t even have the common courtesy of making a good film to disguise their blatant vacation in the sun; it’s all just one miserable experience from start to finish, which not even Spade seems to be comfortable doing anymore in a performance that’s very one-note and bland, especially compared to the insanely over-the-top acrobatics that Lauren Lapkus is trying to accomplish here.

What makes me the most frustrated about this film is that, if things were normal and cinemas were still open, this could have so easily slipped under the radar, just like most of the other Netflix-exclusive Happy Madison productions. However, because we are in this situation with COVID-19, streaming and VOD are being used more now than ever by bored house-dwellers, and so something like this sticks out far more than it normally would, because it’s new and easy to access. I dread at the thought of people watching this as a means to get through lockdown, because they’re going to get something that will make them miss the theatrical experience even more, since there would usually be things playing in the cinema that are far better and far more deserving of your time than this awful Netflix movie you can easily bury and move on.

The Wrong Missy is an appallingly unfunny comedy from Happy Madison that dishes out all of the usual tropes – luxurious setting, obnoxious characters, Rob Schneider etc – on a miserable plate which wastes talented actors on grinding material that’s far beneath them, and makes you wish for cinemas to open up again even quicker so that it can be lost to the Netflix algorithm.