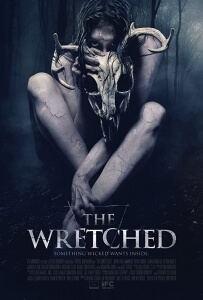 BASICALLY…: A teenager (Howard) makes a disturbing discovery about the family living next door to him…

Back in the summer of 2013, I went to see a film called The Way, Way Back, a coming-of-age drama about a young teenage boy going to work at a water park over the summer. It had a solid cast – Steve Carell, Sam Rockwell and Toni Collette were among some of the names – and a even better slew of reviews that labelled it a fresh new take on the adolescent narrative, but I didn’t end up being all that impressed by it; I found a lot of the snarky humour to be kind of obnoxious, which made some of the main characters more annoying than endearing, and the overall themes just didn’t resonate with me because they felt a little too phoney for my tastes.

Looking back on it now, and especially after watching The Wretched – a new horror piece by filmmaking brothers Brett and Drew Pierce – what I think that movie really needed was for Robert Eggers’ The Witch to suddenly start happening somewhere in the background. That would have certainly made the film a lot more interesting, and the genre-bending is definitely part of what makes The Wretched a pretty decent watch as well.

Things kick off when teenager Ben (John-Paul Howard) goes to stay with his dad (Jamison Jones) for the summer; his parents have recently separated, which is already a tense situation for a hormonal teen boy, but he soon makes the most of his situation, even making friends with local girl Mallory (Piper Curda) who works at the same harbour as Ben and his dad do. Living next door to Ben’s father is a young family who are pretty normal at first, until a mysterious being literally comes crawling into their lives and manifests itself within their unit, something that only Ben seems to notice; he quickly deduces that a woodland witch is the one causing their strife, and is using its powers to feed on children as well as make people forget that they even had kids in the first place, unless it can be stopped before it causes too much harm.

When it comes to horror movies about witches, this one is not quite as stylish as The Witch or even The Blair Witch Project, but The Wretched gets by with having fun as it bends distinct genres together to add a whole other layer to the both of them. The Pierce brothers did this previously with their debut film Deadheads, which combined the zombie film with a meaningful road trip movie, and here they also manage to strike a fair balance between the two warring genres without ever feeling like one is overlapping the other, or that the two wildly different tones don’t clash too greatly with each other. You can be charmed by the lead character’s likeability as he makes friends, hangs out with his dad, and acts just like any normal teenager would by going out to party and stay out too late, but also be seriously creeped out by the supernatural activities going on right in the next house over from this kid; it’s fun watching them be placed together in the same movie, because you can see how both could exist as their own entity without the assistance of the other, but at the same time they both happen to be relatively strong examples of those genres that it feels like you’re getting two solid films for the price of one. The stuff with this teenage boy is good, well-acted and neatly paced without coming off as too corny or contrived, while the much spookier elements are handled really well, being creepy when they need to be and without any unnecessary elements such as jump-scares to make the horror stand out as much.

It’s good at keeping your attention all the way through, because it leaves you interested enough in these characters to want to carry on and find out what eventually happens to them, and it is able to create an unnerving atmosphere in several of its night-time shots, with people just standing there in the background without ever moving a muscle, or even when it’s set during the day and the very presence of certain figures is enough to send some unmistakable chills down the spine. The Pierces seem to know the basics of making a simple shot feel unnerving, and don’t ever feel the need to ruin the moment with a fake-out scare or something popping towards the screen as it screams at the camera; they just let these moments play out for however long they need to, and refuse to hold back on any assumptions that certain people are killed off in some extremely gruesome manners. They also manage to work in some really good practical effects which harken back to that pre-CGI period when horror movies could make things really look like they’re ripping people’s flesh apart right in front of the camera lens.

Not all of it works, including a later twist which, despite it being unexpected and with it making reasonable sense once you understand some of the context, isn’t really explored as much as it probably should be in favour of a more streamlined climax, and while most of the effects are good there’s one or two which stick out as a blatant rush-job (CGI fire is CGI). However, for the most part, this is a pretty solid horror where you’re invested and entertained enough to care about what happens later on, and on the flipside this is a hardcore coming-of-age drama that contains some good acting and likeable characters. Put the two together, and you have yourself a fun combination that surprisingly works well in spite of its unnatural origins, which as it turns out is far from wretched.

The Wretched is an entertaining combination of both a creepy and suspenseful horror movie, and a well-acted coming-of-age drama, in a bending of genres that works well on both ends and makes for a fun sit because you know you’re getting two wildly different but equally strong movies for the price of one, without ever sacrificing tone or general intrigue.