The World To Come (Review) – A Handsome And Respectful Historical Romance 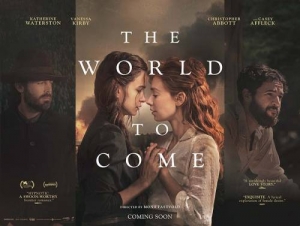 BASICALLY…: Two women (Waterson and Kirby) living isolated and unhappy marriages find comfort and solace in each other…

Between Portrait of a Lady on Fire, Ammonite, and now The World To Come, it’s a good time to be a historical lesbian drama. These films have gone over so well with critics and audiences that even SNL recently made their own spoof trailer with that episode’s host Carey Mulligan, aptly titled “Lesbian Period Drama”, which poked fun at the many tropes and characteristics of such a movie (feel free to give it a watch below).

Admittedly, it’s a little difficult to watch The World To Come with a straight face after seeing the above spoof, because it does contain a lot of the familiar attributes that the video makes light of: the suppressed moods and desires of its two central lovers, fingers gently caressing one another, and the big build-up to their eventual kissing session. However, The World To Come isn’t merely a collection of the most reliable tropes of a lesbian period drama; it is a handsomely crafted film that works well enough as its own tale of unrequited ambition in a time where that was virtually impossible for women of certain positions, with a quartet of strong core performances carrying its intriguing moments.

Set in 1856, a woman named Abigail (Katherine Waterston) and her husband Dyer (Casey Affleck, also a producer on the film) operate and live on a farm somewhere in the East Coast countryside. Abigail is clearly a learned woman, her frequent narration exhibiting a sense of intelligence and grasp of the English language, but she has resigned herself to a life of servitude and a passion-free marriage, especially after the tragic death of their young daughter. Not long after the New Year rings in, another childless couple moves in to a neighbouring farm: they are Finney (Christopher Abbott) and his wife Tallie (Vanessa Kirby), the latter of whom Abigail immediately takes a shining to. The two women manage to find joy and comfort in their budding friendship, and eventually their mutual attraction to each other morphs into a full-on passionate affair – but the sensibilities of the time, as well as Tallie’s increasingly volatile marriage, threaten to tear them apart forever.

Like both Portrait of a Lady on Fire and Ammonite, The World To Come is a slow-burn romantic drama, which dedicates as much time as it can with its characters trying their hardest to adapt to their harsh and unforgiving environments, before the inevitable same-sex affair can begin. Here, though, the pacing does eventually reach a point where you do become a little impatient; not enough to fully lose interest in the overall story, characters and style, but you do begin to want things to progress a little quicker than they are, because it does tend to meander around certain things that ultimately don’t matter in terms of the central narrative.

However, there are little things which are intriguing enough to still keep you firmly attached, including its rather vivid and unexpected stylistic choices. While the old-fashioned 1.66:1 aspect ratio and grainy, but colourful, cinematography by André Chemetoff is certainly par for the course with this type of movie (but that doesn’t mean it’s any less stunning), its rather jazzy musical score – including numerous wind instruments like clarinets and saxophones – creates an unconventional juxtaposition between the historical backdrop of mid-1800s America, and the ahead-of-their-time main lovers who were perhaps born a century or two too early. Director Mona Fastvold also embraces the heavy narrative approach that her film (which is based on a story by Jim Shepard, who also co-wrote the screenplay with Ron Hansen) enjoys bathing itself in; hand-written dates will periodically pop up on the screen as mini chapter titles, followed by incredibly descriptive narration by Katherine Waterston’s Abigail as though we are watching an audiobook sprung to life. Though this may seem like the lines between the descriptive writing and the visual medium are heavily blurred, it oddly retains its composure by letting each side have their own moments to move the story forward, ensuring that it works well enough as both a film and a written piece of visual literature.

The four main performances also work effectively with each other to give the right amount of passion and internal sorrow to match the themes and tones of the movie that they’re in. Katherine Waterston and Vanessa Kirby share a fiery chemistry that makes it easy for the audience to buy their burning passion for one another, but there is also a mutual sense of tragedy in every infliction of their voices, whether it’s the mild grief of having lost a child or being subject to bullish cruelty and probable abuse by a spouse; both actresses convey their respective misgivings in unshowy and quietly powerful ways. Meanwhile, Casey Affleck and Christopher Abbott largely function as background characters, but whenever they are thrust into the foreground there is a sense of uncertain menace and bitterness that makes sense as to why the two women are always on edge when with each other. Affleck especially manages to evoke a slight sense of dread without entirely letting you in on his actual way of thinking (plus, concerning films where Casey Affleck is mourning a dead child while his equally-sullen wife engages in an affair with another person, The World To Come is far superior to Every Breath You Take).

It is, overall, a watchable affair with some dazzling and intriguing little add-ons, although its pacing issues might lead some to feel like it’s perhaps taking too much of its sweet time. Those people might be better off watching the above SNL sketch; it’s only a few minutes long, and it gets to the heart of things much quicker, but you’ll miss the compelling scenery and passion of the actual thing.

The World To Come is a handsomely crafted, if perhaps too slow for its own good, historical romantic drama that coasts on some dazzling visuals and an intriguing style, as well as four central performances which nail the mood and tone that the movie is ultimately settling on.

The World To Come is now showing in cinemas nationwide – click here to find a screening near you!