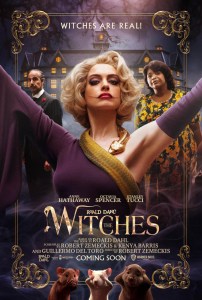 BASICALLY…: A young boy (Bruno) comes across a conference of witches at a hotel, led by the Grand High Witch (Hathaway) who seeks to turn children into mice…

Roald Dahl made no secrets about how much he disliked film adaptations of his stories – for example, he despised Willy Wonka and the Chocolate Factory, lamenting everything from the casting of Gene Wilder to the original songs – but it was perhaps director Nicolas Roeg’s version of Dahl’s 1983 story The Witches that inspired the most furore from the acclaimed author. Although it would eventually spawn a cult following, Dahl hated the film so much, especially its ending which was considerably different than how it was in the book, that he even threatened to run a publicity campaign against the film to dissuade audiences from going to see it (he was eventually talked out of it by Muppets creator Jim Henson, who served as a producer on the film).

It’s hard to imagine that Dahl, were he still around today, would have different feelings about the second adaptation of The Witches, this time directed by Robert Zemeckis, because while it is technically closer to the book than Roeg’s version was, there’s still a certain edge that feels missing from this one, which the author probably wouldn’t have entirely been okay with.

Full disclosure: The Witches was never my favourite Roald Dahl story. In fact, I remember feeling as a child a little underwhelmed by the way it ends, as though it stops right before the really interesting stuff happens. I don’t even have that big of an attachment to the Roeg film, because aside from clips every now and then I didn’t see it either as a kid or an adult. With that in mind, I can only review this film based on what it gives me, without letting any sense of nostalgia cloud my judgement, and from that angle, the movie is simply okay. It’s not the wildly horrible mess I had heard it was from other reviews, but there wasn’t much else to make me fully recommend it, either.

Chris Rock narrates the film, which takes place in 1967 Alabama, and sees a young and unnamed orphaned boy (Jahzir Bruno) being taken in by his kindly grandmother (Octavia Spencer) after the accident that kills his parents. After a particularly nasty supermarket encounter, she soon tells the boy that there are evil witches out in the world, who want to rid the world of all children, and so the two of them head to a fancy seaside hotel to get away from all of that. Unfortunately, they picked the same hotel as a coven of witches, led by the dastardly Grand High Witch (Anne Hathaway) who is leading a conference to divulge her plan to turn every child in the world into mice, and then let the rodent-phobic society do the rest. The boy, who was eavesdropping on them, is caught and turned into a mouse himself; now he, his grandmother, and his new mice friends must find a way to stop the Grand High Witch from carrying out her evil plan.

Honestly, I think not watching the Nicolas Roeg version of The Witches before this one helped me enjoy this one more than I thought I would, because I am fairly certain that I would have been a lot angrier and disappointed had I seen what had been done before (even though this movie technically isn’t a remake of that film, though it does combine elements of both the book and the Roeg version). Zemeckis, who also co-wrote the screenplay with Guillermo del Toro, is able to bring a sense of energy and family-orientated fun to the story, which is certainly campy and over-the-top but not excruciatingly so; there’s never a point where it feels irritating or even that punishing to sit through, it’s just a zany fantasy comedy with a similar tone as past Zemeckis films like Back to the Future or Who Framed Roger Rabbit (although, obviously, nowhere near as good). It’s a well-made movie, with the sets, costumes and cinematography having some bright spots of colour, all of which contribute to the sol

Part of the fun is also in watching some of these actors dive completely into the ridiculousness of their characters, especially Anne Hathaway who is chewing scenery left and right with an extremely theatrical Eastern-European accent and a crazy-eyed glare that’s a different kind of terrifying than Anjelica Huston was in the Roeg version. Octavia Spencer is good as always, and she shares a sweet chemistry with young Jahzir Bruno’s likeable protagonist, although spare a thought for Stanley Tucci who’s mostly wasted in the role that Rowan Atkinson played in Roeg’s film. Zemeckis gets flamboyant and over-the-top performances out of everyone, from the big stars to the smaller supporting cast, which contributes to the overall lighter tone which, again, might not sound too pleasing to hardcore fans of Roeg’s adaptation of the story, but works well enough for anyone not too eager for nightmare fuel.

Of course, not everything works. Rock’s narration, for one, is sporadic at best, and only comes in to tell us information that we either already knew or didn’t exactly need to know. There’s also an excessive use of CGI, which is to be expected in a modern-day Zemeckis movie, but half the time it might as well be one of the director’s motion-capture animated outings because there’s so much of it to separate us from what’s real and what’s fake. It’s also the kind of story where the stakes aren’t especially too high, because much of the film takes place in this hotel where you don’t really feel like things are potentially going to have lasting consequences outside of it, while certain concerns about being mice for the rest of these children’s lives is all but glossed over, which doesn’t give the story much of a goal to reach towards.

In the end, though, The Witches is simply fine. For families, it’s perfectly serviceable, and I can see children being entertained by it just fine, while most adults will probably not mind it too much either (unless they’re too caught up on memories of the previous film adaptation). It’s certainly not one of either Zemeckis’s nor co-writer del Toro’s finest films, but as a film meant for the whole family to enjoy, it’s accessible and entertaining enough while retaining as much of the original story’s spirit as it possibly can. Dahl himself may very well have approved after all.

The Witches is a passable family film that sees director Robert Zemeckis inject a lot of energy and fun into the classic Roald Dahl story, which doesn’t always work but gives many of the film’s over-the-top qualities – particularly a scenery-chewing Anne Hathaway – some time to shine.

The Witches is available now on Premium Video On Demand.