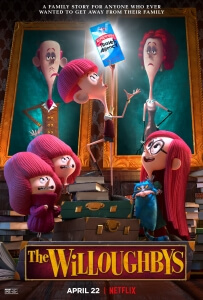 BASICALLY…: The young Willoughby siblings (Forte, Caro and Cullen) hatch a plot to get rid of their selfish parents (Short and Krakowski)…

As good as a lot of family films can be, the overall tone for a lot of them nowadays feels a lot safer than they used to be. Back in the 80s and 90s, some of the darkest films at the time came from movies intended for children, whether it’s Return to Oz, Matilda or The Neverending Story (hell, even Disney wasn’t afraid to go dark every now and then with films like The Lion King or The Hunchback of Notre Dame straight up showing dead bodies); by contrast, today’s family films tend to err on the lighter side of things, presumably as a means to not offend anyone with their less-than-positive attitudes. There’s nothing wrong with appealing to a more sensitive crowd, but at the same time one does miss when family films could go an extra step to be as dark as they realistically could be.

The Willoughbys comes very close to replicating that dark spirit of family films from those eras, mostly demonstrated through a delightfully wicked sense of humour and stylish, gothic designs that look like if Tim Burton had directed Coraline; not only is it refreshing in this day and age to get a family film that has no fear of going a little too far, but it is also a very entertaining, and often very funny, film that kids and adults can enjoy perfectly well.

The story is about the young Willoughby offspring, including the eldest son Tim (Will Forte), his sister Jane (Alessia Caro) and their two twin brothers, both named Barnaby (Seán Cullen). They come from a great line of people from throughout history, including kings and explorers; unfortunately for them, their parents (Martin Short and Jane Krakowski) are extremely selfish and neglectful, far too wrapped up in their own love for each other to even spare a thought for their offspring (they hate children, yet singularly refer to each other as “Mother” and “Father” in a recurring gag). Fed up with the Willoughby name being dragged through the dirt by their parents’ carelessness, Tim and his siblings hatch a plan to get rid of them and make themselves orphans, which they do by organising a trip with several stops where they are sure to meet their way-overdue deaths. Soon after they leave, the children are placed in the care of kindly nanny Linda (Maya Rudolph), which leads the children on a journey to discover the true meaning of family.

Oh, and did I mention that the film is narrated by a talking cat that’s voiced by Ricky Gervais? Because at this point, why wouldn’t that be a thing in this movie? And I mean that in a good way.

This movie is all the right levels of silly, with fast-paced slapstick that’s very well-timed and visual gags that are so subtle you’ll almost want to re-watch it just so you can pick up on things that you missed in the background. It’s all brought to life through some gorgeously stylised CG animation which, like Spider-Man: Into The Spider-Verse or The Peanuts Movie, slows down the frame rate so that the movements closely resemble traditional 2D animation, or even stop-motion animation. It allows for the slapstick to flow a lot smoother than some of the robotic motions you’d find in some of the lesser 3D animated films, and for some of the designs to pop out a lot more such as the Burton-esque layouts of the Willoughby home or something as simple as fire which is made to resemble a cut-out piece of yellow cloth. It’s highly imaginative stuff on display here from director and co-writer Kris Pearn, who previously directed the sequel to Cloudy with a Chance of Meatballs (which makes sense, because although Phil Lord and Christopher Miller aren’t attached to this movie you can tell that this kind of film was made with their exact kinetic style in mind).

The overall tone is definitely aiming towards something like Lemony Snicket’s A Series of Unfortunate Events or Roald Dahl’s stories (characters even mention James and the Giant Peach at one point), and if you’ve read any of those then you’ll know what you’re in store for here, with its dark themes and overtones Trojan-horsed inside of a colourful family movie. When you break it down, the main plot of this film is of these neglected children coming up with ways to ensure their horrible parents die just as horrifically, which is something you’d never find in a film like The Secret Life of Pets (or any Illumination film for that matter), and that’s what makes this film feel so refreshing in this over-saturated market, because it isn’t afraid to take chances and go with material that may be too intense for a much younger crowd, but it also has the humour and charm to fill in those holes when required. It’s a family film that actually treats its audience with a little more respect, since it’s assuming that its audience can handle the dark material no matter what age they are, and doesn’t once talk down to them as though they were, well, children.

It’s nice to know that such an animated film can exist nowadays, let alone one designed specifically for younger audiences, but it’s even nicer that it contains some laugh-out-loud humour, fun characters, some gorgeous animation and a wicked anything-goes attitude which all adds up to a nice surprise of a film. It’s certainly a better film to check out than Trolls World Tour, at the very least.

The Willoughbys is a colourful, funny and devilishly entertaining family film, with some dark themes and overtones which feel refreshing in today’s much safer marketplace, brought to life with some vivid slapstick and visual humour that’s accented by some gorgeously stylised animation which helps it flow a lot smoother than certain other 3D animated films. It is a wicked surprise of a family film, and that’s before you even factor in Ricky Gervais as a talking cat narrator.