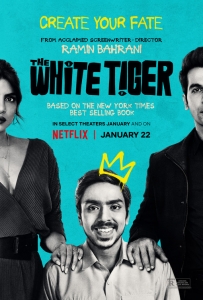 BASICALLY…: In India, an ambitious driver (Gourav) begins a gradual climb from a life of poverty to the top of the business chain…

Hollywood has a mixed history of romanticising Indian society for Western audiences; for every Slumdog Millionaire or Lion which depict some of the harsher poverty-stricken lifestyles, there’s a Best Exotic Marigold Hotel or Eat Pray Love which simplify the culture to its barest essentials (and three out of four of those examples definitely feature Dev Patel in some capacity).

Although The White Tiger, the Netflix adaptation of Arvind Adiga’s best-selling novel of the same name, undoubtedly falls more into the former category than the latter, there is still a sense that Hollywood’s ongoing fascination with India has yet to entirely capture what it is to truly be Indian, instead of a general audience’s idea of what an Indian person should be like. Regardless, this film is still able to entertain with its intriguing rags-to-riches story of crime, murder, and everything in between.

We meet our protagonist, wealthy entrepreneur Balram (Adarsh Gourav), as he’s typing an e-mail to a powerful Chinese CEO who’s due to visit the country soon for a conference. In said e-mail, which serves as the movie’s framing device, he outlines his rough climb to the top of the business ladder; five years prior, having grown up in poverty with his family, Balram becomes determined to serve the ruthless gangsters who swipe a sizeable percentage of his village’s wages, and eventually becomes the driver to Ashok (Rajkummar Rao), the Westernized son of a gangster. Despite the insistence of Ashok and his wife Pinky (Priyanka Chopra, also an executive producer on the film) who say and think otherwise, Balram is extremely submissive to his new masters, and dutifully serves them with little or no ambition of his own. However, when an accident forces Balram to take a new look at the people he serves, the more he becomes dissatisfied with his life as a servant, and so begins a perilous plot to escape his shackles and become his own master.

With its themes of class and servitude, you can easily draw numerous parallels to Parasite, although even at its most outrageous it’s unlikely that Bong Joon-ho’s Oscar-winning movie would have scenes where the main character is laughing maniacally as he’s shitting into an open hole. It’s one of many moments in the film where writer-director Ramin Bahrani – apparently a close friend of author Adiga, who dedicated the book to the filmmaker – really lets loose with both the storytelling and the filmmaking style, capturing the dark comedy of his main character’s endless abuse by his superiors as well as his own psychological struggle with being what he thinks he was put on this planet for. Bahrani really focuses on this idea of doing nothing more than serving those of a higher class being drilled into the minds of people like Balram from an early start, and how it compels them to blissfully go along with anything they say or do, even when it means he’s being thrown under the bus for something he did not do. It leads to interesting turns for this main character, who becomes more and more ruthless and power-hungry the more he realises how much he’s being cruelly mistreated, especially by the privileged Ashok and Pinky who have spent so much time in America that they want to appear to treat him like an equal instead of a servant, yet they expect him to act as such for most of their relationship with him.

Despite the grim undertones, Bahrani has lots of fun playing around with editing and cinematography to capture the Indian landscapes from Delhi to Bangalore, and stylistically leans closer to something like Goodfellas or The Wolf of Wall Street than Slumdog Millionaire, with its occasional fourth wall breaks and surreal close-up camera angles. Visually, it’s a very handsome movie, with even the ugliest of interiors glimmering with some lively lighting, and Bahrani is a strong enough filmmaker to capture the darker parts of this story without letting the overall tone slip up on itself. The acting, too, is rather good; Adarsh Gourav is a compelling lead, at once showing his character’s wily ambition as well as his subconscious battle with his own expectations, and although she has perhaps the least amount to really do amongst the three mains (despite being the biggest name in the cast) Priyanka Chopra leaves a sizeable impression that only makes her incredibly hammy recent turn in We Can Be Heroes (also from Netflix) look a little more embarrassing by comparison.

There are parts of the movie which threaten to lag, or go in directions which make things a lot more predictable – whenever it cuts back to the film’s wraparound segment, we’re briefly pulled out of the story being told because it offers hints of what eventually happens – but even at just over two hours, the film doesn’t outstay its welcome. It keeps things going at a solid pace, ensuring that it remains entertaining throughout at least a vast majority of the running time, and has plenty of interesting themes to pick apart and analyse which will certainly give some people an excuse to revisit it once or twice in the future.

As for its place in Hollywood’s ongoing romanticisation of Indian society? Well, with its all-Indian cast and often bleak depictions of the sharp class divide, it certainly seems like an appropriate step in the right direction for Indian representation, though in terms of bringing the “true” India to the screen, we’re probably still a long way off. No matter what, though, at least films like The White Tiger are there to entertain us until we get there.

The White Tiger is an entertaining examination of the class divide in India, filled with handsome filmmaking, strong performances, and intriguing themes of servitude and submission.

The White Tiger is now available on Netflix.