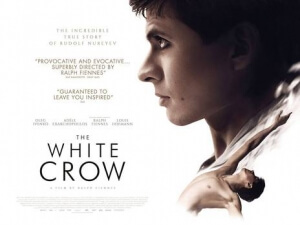 Ralph Fiennes’ directing career started off strong with the powerful retelling of Shakespeare’s Coriolanus, and then meandered a little with his intimate Charles Dickens biopic The Invisible Woman, but with his third feature The White Crow it would be tempting to say that it easily pirouettes and leaps right into our hearts, if it weren’t for the fact that it’s sadly a rather dull movie that never jumps off the ground as much as its lead character literally does on-screen.

Said main character is Rudolf Nureyev (played by real-life Ukrainian ballet dancer Oleg Ivenko in his acting debut), a prominent dancer in the Soviet Union who, in 1961, travels outside the USSR for the first time to perform with the Kirov Ballet in Paris. There, despite being under strict watch by his Soviet superiors, he begins to fraternise with local admirers, including socialite Clara Saint (Blue Is The Warmest Colour’s Adèle Exarchopoulos), and becomes fascinated with the open-minded culture that Paris has to offer, while becoming increasingly less satisfied with the USSR’s tight grasp on him and his contemporaries. It all leads to a rather dramatic decision that would change his life forever, and would come as a pretty big blow to Soviet culture at a time when the Cold War was at its highest peak.

Before that pivotal moment, however, the movie enjoys cutting back and forth to various moments in his life, including his bleak and miserable childhood – all shot with a widescreen aspect ratio, but it’s the only part of the movie that experiments with different screen sizes – and his vigorous training under the tutelage of his soft-spoken teacher Alexander Pushkin (played by Fiennes in a supporting role), during which he becomes close with Pushkin and his wife Xenia (Chulpan Khamatova). These frequent flashbacks seem to happen whenever they want, without a noticeable transition or even a sense of logic; they will just pop up randomly at several stages in the Paris-set main story, and with the exception of the childhood scenes – which are, again, the only sections of the movie to be shot and exhibited differently than the rest of it – there is little to no indication that what we are now watching takes place either before or at the same time as the scene prior. It’s a frustrating practise that takes you out of the movie because you’re trying more to piece together what order this is all meant to be taking place in rather than actually becoming engrossed in the story and its central character themselves, and as a result you end up feeling so discombobulated by its ADHD narrative that any sense of investment barely remains, despite the clearly noble intentions that director Fiennes has with this story.

It’s also painfully obvious from all of this frequent jumping from one moment in time to another that Fiennes and writer David Hare don’t seem to have come up with a reasonably compelling story to tell on its own merits, and have tried to supplement that with all of these distractingly non-chronological detours in the process. While his 1961 trip to Paris and the massive decision at its end on his part was no doubt a hugely significant event in the life of Rudolf Nureyev, it was also a somewhat minor incident when you compare it to all of his other achievements later on in life, and one where not much else happened around it that could be classed as dramatically engaging; it’s largely just a collection of scenes where Nureyev sees some of the Parisian sights, and simply likes what he sees. That’s not enough dramatic material to fill a two-hour movie, hence the film’s frequent cutting away to several other incidents earlier in his life, no matter how randomly and out of order they seem to have been placed; this leads the film to become a largely unengaging and dramatically dry slog that’s about as exciting and interesting as sitting down to watch an actual ballet (no offense to any of you who actually enjoy that sort of thing). Seriously, not since The 15:17 to Paris have I not seen a real-life story play out on the big screen with such little life to it, although don’t mistake this comparison as this movie is nowhere even close to being as inept as that Clint Eastwood embarrassment; at least The White Crow doesn’t have an opening scene denouncing a teacher’s diagnosis of ADHD and them being told by the parents that they trust God over their statistics.

While the movie suffers greatly from its largely drama-free structure and lack of a coherent story to stick itself together, the few moments that do shine in this movie are due in part to Fiennes’ occasional eye for visual intimacy, and also for the highly commendable debut performance by Oleg Ivenko in the central role. The real-life dancer gives a carefully researched physical performance whenever he’s mimicking the dance techniques of the lauded Nureyev, and in the scenes where he’s required to actually act he does a fine job at displaying the character’s rebellious, often hot-headed, nature which doesn’t make his eventual decision seem like it comes out of thin air by the end. Meanwhile, Fiennes allows for a number of his scenes to have a soft, gentle visual look to them which can make certain scenes of seduction feel all the more sensual and even arousing; it’s a trait that was previously noticed in his previous directorial effort The Invisible Woman, and for all of this movie’s faults – which, sadly, there is a great number of – neither this sensual approach by Fiennes nor its decent lead performance by Ivenko are part of them.

However, for the casual audience member this is likely to be a case where they just can’t get into it as much as higher-brow contemporaries, but even those people should be able to pick up on how narratively empty and unengaging this movie has turned out to be, which is a crying shame considering the number of talent involved with making it.

The White Crow is a noble but ultimately underwhelming effort from director Ralph Fiennes, who despite some intimate direction and a serviceable lead performance by Oleg Ivenko cannot overcome a dramatically-dry narrative that never leaps as high as the central dancer it is depicting.