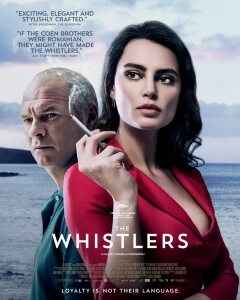 Long considered a pioneer of Romanian New Wave cinema, Corneliu Porumboiu’s films have captivated numerous critics and audiences on the festival circuit, but the dry and niche flavour of his work hasn’t exactly made him an accessible storyteller to wider audiences. That is, however, until The Whistlers which, much like his earlier works such as Police, Adjective and The Treasure, harkens back to classic genre filmmaking with his own unique twist; kind of like something you’d see in the 70s such as The French Connection or Dirty Harry, but with an eccentric and bouncy tone that would make Quentin Tarantino ruin his underwear.

Like most of those classic films that this one is clearly paying deep respect towards, The Whistlers is an intriguing and highly entertaining caper that’s as pulpy as it is unpredictable.

The crux of the plot follows Cristi (Vlad Ivanov), a police detective in Romania who isn’t afraid to play dirty in the line of duty, and who becomes involved in the investigation of drug money launderer Zsolt (Sabin Tambrea), a mattress salesman that has hidden €30 million inside his foamy products. Intent on recovering the money and freeing Zsolt, his girlfriend Gilda (Catrinel Marlon) persuades Cristi to travel to the Canary Islands to learn an ancient whistling language, which they will use to communicate without the authorities picking up on it, and pull off the ambitious crime that also sees Cristi dodging several gangsters, his own police department, and even his nosey mother (Julieta Szönyi).

While some of Porumboiu’s eccentric trademarks remain in place, this feels like exciting new territory for the Romanian filmmaker. He seems to be having plenty of fun basking in the numerous directions his story frequently takes, from the colourful title cards (because this definitely seems like the kind of film that would have title cards of some variety) to the equally flashy characters whose motivations you’re never entirely sure of until the last moment. You get a fairly good sense of what Cristi is about, even though he himself seems to be constantly unsure of which side of the law he prefers to operate on, to a point to where you even start to feel some of his frustrations as he keeps getting blind-sided by many of the figures in his life, including his mother who donates his hefty bribe money to the local church. Several side characters get moments to shine, particularly the film’s designated femme fatale Gilda, played by Romanian model Catrinel Marlon in an eye-opening performance shrouded in enough mystery to keep you heavily invested in her own affairs, as well as her convincing methods to hide her true intentions from the authorities. Porumboui gives each of them plenty of things to do in this ever-unfolding story, which keeps you interested even as the plot begins to fall victim towards its own complexity.

Most fascinating is the film’s unique embedding of that ancient whistling language; on the surface, it might seem ridiculous to communicate entirely through a carefully selected line of whistles, but the movie really spends a lot of time teaching us the basic ins and outs of this language. We see how each vowel and consonant is expressed as well as how one uses them all together to create vast sentences just by using different levels of this one sound, and it teaches us this in such a way that it not only feels entirely plausible (which, to be fair, it is), but can sometimes be just as fun to learn as any other foreign language. It forms part of an endlessly clever and highly entertaining puzzle one has to figure out along the way before you reach the inevitably violent climax, which bombards you with one minor revelation after another and even ends on a somewhat ambiguous note where you have to wonder if fantasy has come into play; it keeps you guessing well after the credits begin rolling, and mostly satisfied in how it has gotten to that point.

It’s not a particularly deep movie, with not a whole lot of hidden subtexts or more complex themes, but that seems to be part of the intention. Prior to this one, Porumboiu has mostly made films that revel in the uneventful, where not much happens on the surface but keeps a steady distance from what is actually going on underneath it; here, it just seems like he didn’t want to repeat himself and instead set out to make an accessible crime thriller that gives you everything at face value, but has the intelligence and sophistication to pull it off without seeming too empty. Put simply, it seems like he just wanted to make a fun movie that as many people as possible could enjoy, and he has certainly done that without sacrificing any of his previous credentials or unique approaches to filmmaking, which not only makes for an amusing watch but potentially opens up his filmography to anyone who might be interested in seeing what else this person has done.

It’s worth recommending not just if you’re in the mood for an alternative crime caper that never apologises for its eccentricities, but also if you’re open to the idea that strong, entertaining thrillers such as this can come from the most unlikely of locations, and especially with the least expected of languages.

The Whistlers is an entertaining crime caper from Romanian director Corneliu Porumboiu, which doesn’t exactly reach for deep and complex themes like many of his previous films, but provides a straightforward but no less thrilling adventure with colourful characters, unpredictable twists, and a unique lesson about the wonders of a strange whistling language from the Canary Islands.