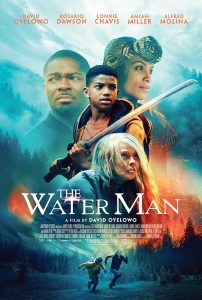 BASICALLY…: A young boy (Chaves) goes in search of a mythic figure in order to heal his ill mother (Dawson)…

David Oyelowo clearly has a fascination with children’s fantasy tales, having produced and co-starred in last year’s Come Away (which combined the stories of Alice in Wonderland and Peter Pan), given a supporting turn in the recent Peter Rabbit 2, and now makes his directorial debut with The Water Man, an original modern fairy tale which he also produces and co-stars in.

Of those movies, this one feels like much more of a personal passion project for the actor-turned-filmmaker, and it shows in his whimsical and sweet-natured execution of a nice, meaty story with a good amount of heart. He has, along with screenwriter Emma Needell (also making her feature debut), crafted a new bedtime story that you won’t feel too guilty about reading to your (slightly older) children.

The film’s main character is Gunner Boone (Lonnie Chaves), a young boy living with his war veteran father Amos (Oyelowo) and his mother Mary (Rosario Dawson), who is suffering from leukaemia. Gunner wants nothing more than to help his mother overcome her illness, so when he hears about the local legend of the Water Man – a mythical figure said to have found a way to achieve immortality – he decides to set out in search of him in order to get him to heal her. Along with steadfast local girl Jo (Amiah Miller), Gunner ventures through the wilderness on a meaningful adventure, pursued by Amos who desperately searches for his missing son.

Oyelowo proves to be a gentle filmmaker, flowing his movie along at a brisk hour-and-a-half running time, while finding enough room in between the perilous adventure beats to develop character and settle on impactful themes. He lets the audience absorb the mythos of the titular Water Man and uses that as a jumping-off point to discuss some very grounded topics like death, abuse and acceptance while maintaining the same fantastical tone throughout. There are some visually marvellous sequences where backstories unfold to a series of hand-drawn animation, with each segment being more noticeably different in its style each time, while sequences set in the real world have a vibe of early Spielberg in their sense of awe and wonder (a character possesses an E.T. lunch box, surely a knowing gesture toward the master filmmaker from Oyelowo, who appeared in the filmmaker’s Lincoln). Its degree of earnestness extends to the likeability of the characters and performers, with very capable turns by young leads Lonnie Chaves and Amiah Miller as well as reliable supporting roles by the likes of Oyelowo, Rosario Dawson and Alfred Molina (however, Mario Bello is rather underutilised as a sheriff who assists Oyelowo with the search for his son).

Admittedly, The Water Man does fall into the same wheelhouse as films like A Monster Calls and Bridge to Terabithia, where the young protagonist’s imagination often overpowers their ability to accept reality, especially in the wake of tragedy. Oyelowo’s film, however, does well to stay true to itself without succumbing to easy schmaltz or manipulative tear-jerker scenes; its handling of such heavy themes is mature and lacking in cynicism, clearly coming instead from an individual who has a genuine story to tell a wide-reaching audience that doesn’t talk down to anyone nor consider itself too highbrow for the casual viewer. As a story about a child coming to grips with their grief, it’s certainly walking along a well-trodden path, but the execution is likeable enough for it to still feel wholesome without deviating too far from its original intentions. Parts of it can often be predictable, but you’re having enough of a fun time with these people on this intriguing quest that you’re still along for the ride.

It’s not an original story by any means, but The Water Man has enough captivating ingredients that you honestly don’t mind it being told to you as it is.

The Water Man is a likeable and respectful modern fairy tale from director David Oyelowo, who proves to be a gentle filmmaker with a light but digestible touch on more grounded themes opposite the more fantastical elements, and offsets familiarity with a strong degree of earnestness.

The Water Man is now available on Netflix.