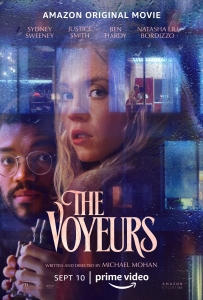 BASICALLY…: A young couple (Sweeney and Smith) become enamoured with the seemingly-perfect couple (Bordizzo and Hardy) living across from them…

There’s something about watching trashy content with several softcore sex scenes spliced into the reel that makes for an incredibly entertaining time, no matter how absolutely ridiculous the plot winds up being, and The Voyeurs – from writer-director Michael Mohan – is a delightfully preposterous, not to mention rather sexy, thriller you’d be more than happy to label as a silly guilty pleasure.

Set in Montreal, young couple Pippa (Sydney Sweeney) and Thomas (Justice Smith) move into a swanky new apartment together, where they very quickly notice the very handsome couple living across the way from them, whose windows appear to constantly be open for their viewing pleasure. Naming them “Margot” (Natasha Liu Bordizzo) and “Brent” (Ben Hardy), in lieu of their actual names, Pippa and Thomas initially take innocent pleasure out of watching their neighbours’ infectious sexual energy, but Pippa begins developing an obsession with them, noticing that their seemingly perfect union is marred by secrets and infidelity. Before too long, the obsession starts destroying Pippa and Thomas’ relationship, and possibly other peoples’ lives as well – but in true trashy psychological thriller fashion, which couple is toying with which?

The Voyeurs – or Sexy Rear Window, going by the vague job description – is the kind of fun erotic thriller that the Fifty Shades movies thought they were being. Full of twisty turns and sensual moments of foreplay, not to mention an unrealistically beautiful cast – beyond the fact that both Natasha Liu Bordizzo and Ben Hardy already look like they were sculpted by the gods, Sydney Sweeney and Justice Smith are also a solid eleven-out-of-ten in the looks department – you can feel the 90s erotica influence draped all over Mohan’s sleek, seductive direction. It’s enough to certainly arouse some intense feelings of desire, particularly with long shots where the camera is slowly focusing on naked torsos, lusting eyes and bitten lips like at any moment the whole thing is just going to turn into a porno, which in a film that is already starving for subtlety makes for some amusingly on-the-nose visuals. You do also feel the genuine chemistry between these actors; Sweeney and Smith do have a rather adorable connection for at least the first half, while Hardy and Bordizzo – despite most of their scenes together scene from afar – clearly display a fiery connection so hot that you could see these two actors also appearing opposite one another in an equally steamy historical romp. The sexual energy between all of them is unmistakable, and the actors certainly appear to be having fun together, leaning heavily into the succulent, borderline campy material.

But make no mistake, for while The Voyeurs is very fun to watch, it’s still an absolutely ludicrous movie to try and make sense of. This is the kind of movie that has twists which would only happen in the mind of a crazy person, and executed by someone even crazier who can’t quite separate the shocking elements from the absolutely stupid ones. Deep into his film’s third act, Mohan introduces sudden new elements which require a lot of leeway from the audience in order to buy how any of it could actually be pulled off; logic pretty much sidesteps offstage, and is replaced with curt, often cruel developments which aren’t sophisticated or smart enough to be labelled “Hitchcockian”. The movie even ends on a laughably harsh note, with a conclusion where you’re basically left rooting for nobody, and contains some of the most contrived deceptions and punishments in an erotic thriller made this century.

The script is often very silly and filled with corny dialogue, and while the performers do deliver strong enough turns to come out with their dignity still intact, even they can’t come close to convince you that anything which unfolds in this final act is legitimate and sensical. However, the fact that you’re having such mindless fun while watching it, from the steamy sex to the sensual cinematography capturing all of it, does make it the kind of trash that’s fun in spite of its throwaway nature. The Voyeurs goes right along with something like the Katherine Heigl-starring Unforgettable, where you know full well that what you’re watching isn’t necessarily high-end entertainment, but you’re still finding enough to enjoy about – whether it’s a crazy performance or the ludicrous twists – that hardly any of the worse stuff doesn’t matter all that much.

The Voyeurs is now available on Amazon Prime Video.