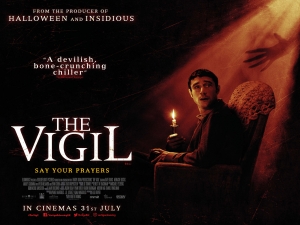 BASICALLY…: A young man (Davis) in an Orthodox Jewish community encounters a malevolent entity whilst providing overnight watch on a deceased man…

For some religious people, no matter what faith, drifting away from their spiritual beliefs can be one of the scariest things they could possibly go through. The uncertainty surrounding whether or not there is indeed a greater power presiding over everything, when you had previously spent most of your life in servitude to that faith, could potentially rock your world so hard that it barely leaves you with enough room for anything else, and to some that’s incredibly frightening.

In movies, particularly horror films, the idea of a religious person losing their faith as a character arc within a related plot is explored quite often, though it is predominantly the Christian faith that receives the most focus (such as The Exorcist and most other exorcism movies). Part of what makes The Vigil stand out is the fact that it actually decides to go with another religion as its primary source for once – Judaism, to be exact – but this is far more than just the Jewish Exorcist; this is a creepy, chilling and highly atmospheric little film that plays its cards just right enough to serve as an effective horror flick that’s worth checking out.

Central to the plot is the Jewish tradition where a person – or “shomer” – is designated to watch over a deceased body for 24 hours, and protect it from evil spirits. It is a role that is suddenly sprung upon a young man named Yakov Ronen (Dave Davis) – who has become estranged from his New York Orthodox Jewish community following a personal tragedy – when he is approached to watch over the newly-deceased body of a reclusive Holocaust survivor for a few hours, until the next morning. Yakov accepts the gig because of the money he’s offered, but upon arriving at the home where the covered body has been placed – and where his Alzheimer’s-ridden widow (Lynn Cohen, in one of her final roles before her death earlier this year) is lurking around – Yakov soon discovers that not only is there something else in the house that’s definitely not of this world, but that it has set its sights on the young man and his ever-growing psychological problems.

Most of the movie takes place within the confides of this small house within the suburbs of New York, which might not sound like it offers a ton of opportunities regarding atmosphere or creative set pieces, but it is a testament to the strength of writer and director Keith Thomas that the film is able to constantly find new ways to send chills down the spine whilst staying in the same location. The way that he uses lighting, camera pans, and even basic framing of props and actors, there always seems to be something new to be discovered here that is legitimately creepy and disturbing, and the filmmaker latches onto several of these to build an overall feeling of dread and anxiety that feels earned and never forced. It largely, and wisely, avoids jump-scares to elicit a genuinely scared response from the audience, and the ones that it does contain are not only effective but they actually factor in to the main plot of the film; there’s no “oh thank goodness, that thing in the dark I thought was a monster was just a cat” moment here, the threat remains consistent throughout.

Beyond it being an intense and creepy-as-hell supernatural horror, it also works as a serviceable character study. Yakov’s plight, complete with a tragic backstory that fills in the blanks as to why he doesn’t really find much solace in his faith anymore, has been played around with before in many other films like this, but the performance from Dave Davis is so strong here that you legitimately care about him and want him to make it through his personal trauma, for which he has been prescribed more pills than a hypochondriac Jewish stereotype. You can feel the neuroses bubbling up all around him, which only exemplify once he becomes aware of whatever it is that’s haunting him, and once it forces him to confront some hard truths about his past and his faith, he absolutely nails the emotional scenes that could have only come from a pretty dark place on the actor’s part. Davis leaves a huge impression in what is mostly a one-man show, but he doesn’t overstay his welcome by having huge, exaggerated outbursts of emotion; he instead goes for a much more understated performance, which works wonders especially with the amount of scared faces he has to make for the majority of it, and it also fits the quiet and much more atmospheric nature that the rest of the film is providing.

There are a couple of obvious things that people can nitpick and find reason to complain about, but I strive to not be that kind of critic who picks apart the tiniest of details to find some flaw with it, unless it’s fundamentally damaging. With this, it definitely has some things which don’t entirely add up, but they’re not even worth mentioning; overall, this is an effective horror with some gorgeously atmospheric cinematography, impressive effects, creepy ideas, and a strong central performance that gives the audience a person to latch onto throughout all of the intensity. It’s one of the better horror movies I’ve seen recently, just for the fact that it actually focuses on building a legitimately scary environment instead of pandering to the lowest common denominator by putting a jump-scare into every other scene – that alone is terrifying enough, and this movie’s spooky enough as it is.

The Vigil is a legitimately creepy and atmospheric horror film that goes far beyond its unique focus on the Jewish faith as opposed to the standard Christian faith, with some effective cinematography that really captures the disturbing aspects of this story, and a strong lead performance from actor Dave Davis which propels the film along at a slow but steady pace, resulting in a solid calling card for both David and writer-director Keith Thomas.

Want to decide what the movie’s like for yourself?
Check out The Vigil showtimes in London
via