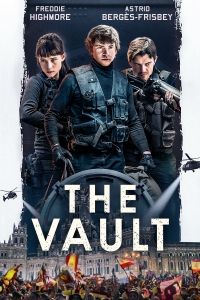 BASICALLY…: A young engineering genius (Highmore) joins a group of thieves for an ambitious heist on the Bank of Spain…

The heist genre got a good ribbing on a recent episode of Rick and Morty, with its many familiar tropes from the rounding-up of eccentric characters to the elaborate plot they enact to achieve their goals all sent up in typically hilarious and smart fashion. Admittedly, it makes watching a newer heist movie like The Vault a little harder to watch, because now that the tropes have been laid bare, all you can think about is how basically every movie like this is eerily similar to one another, with this one being no exception.

However, while The Vault does indeed stick heavily to a very familiar pattern, it’s entertaining enough to at least keep you a bit more hooked than many of the lesser examples of the heist genre.

Taking place in 2010, as Spain progresses further and further in the FIFA World Cup tournament in South Africa, the Spanish government seizes some long-lost sunken treasure from a group of salvagers, led by a man named Walter (Liam Cunningham), and places it deep within the Bank of Spain, said to contain the vault that nobody on Earth has yet been able to penetrate. To solve the mystery of the vault, Walter recruits genius young Cambridge engineering student Thom (Freddie Highmore) to join his gang – including Walter’s right-hand man James (Sam Riley), con artist Lorraine (Àstrid Bergès-Frisbey), logistics expert Simon (Luis Tosar) and hacker Klaus (Axel Stein) – on a mission to sneak into the Bank of Spain, figure out how to enter the vault, and take back what Walter and his crew feel is rightfully theirs. All of this, by the way, while virtually the whole of Spain is focused entirely on the World Cup, and their team’s stunning progress all the way to the final, providing the team with the ultimate distraction on their almost-impossible mission.

Directed by Spanish filmmaker Jaume Balagueró – known for his found-footage zombie movie REC and a handful of its sequels – The Vault is very much the kind of slick, fast-paced heist movie that most audiences have become comfortable with over many years, and it does not hesitate to remind the viewer constantly of its recognisable identity (one character even compares himself to Danny Ocean at one point). While it may not feature the ridiculously overblown rounding-up montage as spoofed in that Rick and Morty episode, the film is quick to feature pretty much every other trope of the heist genre, from the smooth methods that the robbers use to hide their tracks (featuring, among other things, 3D printers, slowed-down CCTV footage, and zip wires), to the gruff and humourless antagonist charged with protecting the vault and its many treasures. Some parts are easy to see coming, including an inevitable double-cross which involves perhaps the most suspicious-looking character out of the lot, but Balagueró manages to make the formula work with a consistent adventure-movie tone with enough tension to fill a Mission: Impossible entry.

The filmmaker and his five (!) writers achieve this by introducing a slew of fun characters who, if this were any other genre, would be accompanying Ethan Hunt on his international escapades, or at the very least be supporting characters in a Fast & Furious movie. The international cast, from Freddie Highmore (who will apparently always carry around with him the same youthful face we were all introduced to in Finding Neverland all those years ago) to Game of Thrones alumni Liam Cunningham, pour a fair amount of energy and charm into characters who aren’t by any means the most complex or even that memorable, but are made compelling and likeable enough to make you root for them and their ambitious heist. Because the film does a fine enough job at making these people entertaining to watch as they pull their numerous tricks against the Spanish authorities, you’re more invested in the plot and thus the intricate action, which again features high-concept set designs you might see in a modernised take on Indiana Jones.

Of course, if heist movies aren’t your thing anyway, then it’s unlikely that The Vault will win you over. As entertaining as the movie is, it does follow a very traditional heist movie format, and when you break it down there isn’t that much which makes it feel wholly unique to the dozens upon dozens of other examples out in the ether. You will honestly get way more out of something like Ocean’s 11 or The Italian Job than you would something like this, only because those movies perhaps had a bit more style and a cooler attitude than this film’s more straightforward approach. However, if you’re looking for something disposable but undeniably thrilling to watch regardless, The Vault is a curiosity worth breaking into – and one that not even Rick and Morty can completely dissuade you from.

The Vault doesn’t set itself that far apart from many other examples of the heist genre, sticking very closely to a tried-and-tested formula, but it’s made entertaining by consistently adventurous pacing and a fun cast of characters who you’re rooting for almost all the way.

The Vault is now available on Amazon Prime Video.