The Vast of Night (Review)

The Vast of Night (Review) 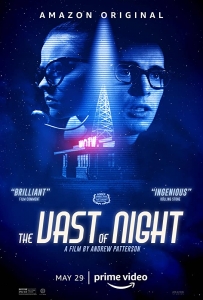 BASICALLY…: A mysterious audio frequency compels a young switchboard operator (McCormick) and a radio DJ (Horowitz) to investigate its origins…

It’s rare to knock it out of the park on your very first go as a filmmaker, but Andrew Patterson – who according to his IMDb page has zero other credits to his name; that’s how new to the game he is – joins the ranks of Quentin Tarantino, Rian Johnson, Jennifer Kent, Jordan Peele and numerous others who, with their debut features, made a profound statement about their clear talents in the craft.

Patterson has created something awe-inspiring with The Vast of Night, a low-key sci-fi thriller that contains filmmaking and storytelling techniques that only a seasoned veteran could manage to perfect, and even then they might struggle somewhat with the overall balance. That isn’t a problem for Patterson, who is able to combine a thoughtful and compelling story with some incredibly ambitious cinematography and slow-burn pacing that not many other low-budget filmmakers today might have the balls to do.

The story is framed as an episode of a Twilight Zone-esque anthology show called “Paradox Theater”, even occasionally showing entire scenes and shots on an old 1950s television set; appropriate, seeing how the film itself is set sometime in that decade, over the course of one night where the majority of a small town in New Mexico is at a basketball game. The only ones who appear to have other things on their mind are Fay (Sierra McCormick), a sixteen-year-old switchboard operator, and Everett (Jake Horowitz), a local radio DJ; they soon discover a strange frequency hovering on their soundwaves, and set out to discover its mysterious origins when they learn it may be the work of something hovering above the clouds.

The influence of The Twilight Zone is obvious, but Patterson also has a clear adoration for the 1950s aesthetic in general, which he brings to life in a stunning display of accuracy that shows how much he’s done his homework. Beyond the period-appropriate set design, costumes and props, the script – written by James Montague and Craig W. Sanger, both of whom also have zero other credits to their name – is filled to the brim with rat-a-tat slang like “Tune out, man!” and “What’s the tale, nightingale?”, with Patterson directing his actors to share their dialogue in a fast-paced manner not unlike His Girl Friday, even acting like the kind of hard-boiled movie detectives you would have seen the likes of Humphrey Bogart play around that time. Our leads Sierra McCormick and Jake Horowitz share a playful chemistry that’s reminiscent of the screwball comedies of the era as well, and their characters are well-defined and charismatic enough to make you interested in where their journey ends up going throughout this fateful night (McCormick, in particular, is an adorable presence) which really carries you though a lot of the film’s much slower moments.

Though it may sound like that’s a bad thing, the slow-pace is part of what makes this movie so fascinating, especially from a filmmaking angle. A large chunk of the first half is told in a series of long one-take tracking shots, whether it’s the two leads walking and talking together down a road like it’s a Richard Linklater movie, or if it’s zooming in slowly on a character’s face as they first hear the mysterious soundwaves that kick off the plot, or in one magnificent piece of camerawork a real-time scurry from the middle of town through several backyards all the way through a packed gymnasium during a basketball game already in progress and out the window towards a radio station. This is some Alfonso Cuarón or early-career Steven Spielberg stuff unfolding right in front of us, and it’s all from somebody who, to the best of my knowledge, has never made a film before this; and the masterful filmmaking doesn’t end there, because there are some extended monologue sequences where it is nothing but characters telling a story on-screen with zero visual images to back them up, but they are made to feel so cinematic because not only are they written and acted so well, but the cinematography and editing leaves just enough to the imagination for us to mentally fill in the blanks (at one point during one story, the camera fades to black as the dialogue keeps coming, as though it is expecting us to close our eyes and imagine what it is they are describing).

It is a creepy and thrilling story told with such strength and confidence that you’re always amazed by the fact that this is the first known credit of this director and many of the other creative talents involved. That isn’t to say that all first-time filmmakers can’t be as good as their more experienced colleagues, but there is often a certain standard with debut movies, especially ones that cost very little to make like this one did, where you do have to kind of grade it on a curve; the fact that there are so many outstanding elements to this movie, from the story to the characters to the filmmaking, means that this is one of the more impressive debuts in recent memory, and makes you really want to see what this guy can also do behind the camera.

The Vast of Night is a breath-taking debut by director Andrew Patterson, who combines his clear love of the 1950s aesthetic and Twilight Zone-esque storytelling with some truly awe-inspiring filmmaking that leaves you thrilled and compelled, even when very little is happening on the screen. It’s an impressive and even inspiring piece of movie-making, and deserves to be seen by anyone with a love for low-key sci-fi and Spielberg-style whimsy.