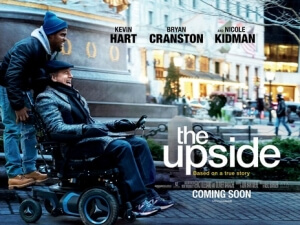 BASICALLY…: An ex-convict (Hart) secures a job working as a carer for a quadriplegic billionaire (Cranston), and the two become good friends…

An English-language remake of the surprise French hit The Intouchables (or Untouchable for those in the UK) has been in the works for some years now, after The Weinstein Company acquired the remake rights shortly after its initial release release. Paul Feig was originally recruited to both write and direct, with actors like Chris Rock and Colin Firth being sought for the roles originally played by Omar Sy and François Cluzet respectively, only for Feig to drop out and eventually be replaced with a couple more directors before Neil Burger signed on, with Kevin Hart and Bryan Cranston locked in as the two leads.

Despite a troubled pre-production, not to mention mixed reviews upon its debut on the 2017 film festival circuit, The Upside – as it was now known – was all set for an early 2018 release… unfortunately, it had the further misfortune of having the name “Weinstein” attached to it, and so when that scandal erupted the film was quietly pulled from the schedule, only for distributor STX to then pick it up and set a new release for it nearly a year from its original slot, right in the January dead-zone of movies where low-quality horror flicks and failed awards contenders get buried by their studios and quickly forgotten by audiences.

Such a fate now awaits this movie, which has noble ambitions behind it but can’t shake off its clichéd contrivances and all-too safe approach to disability and odd-couple relationships.

Similar to how the original sets itself up, we follow former convict Dell (Hart) as he’s begrudgingly going from job interview to job interview just so he can obtain their signature to prove to his parole officer he’s looking for work. He approaches his current job interview with the same attitude, only to earn the attention of his potential employer, billionaire Phillip Lacasse (Cranston) who has been left a quadriplegic following a paragliding accident, and against the wishes of his assistant Yvonne (Nicole Kidman) hires him as his new live-in carer, despite Dell being more than unqualified for the position. Soon, the two men – who both hail from different worlds, Dell from the impoverished districts of New York where his estranged wife (Aja Naomi King) and son are living in a rundown apartment, and Phillip in the comfort of his swanky penthouse with opera music blaring through the speakers – become good friends, and teach each other the important values of life and how best to live it.

This is a far more dialled-down vehicle for Kevin Hart, who has previously made a career out of being in obnoxious comedies like Night School and Ride Along, but not necessarily a course-correctional one, either. The script has him doing a lot of the standard Hart schtick, riffing on certain topics in a mini stand-up set in the middle of a scene as well as reacting to gross-out humour on occasion – there’s a scene that seems to go on for an eternity about changing Cranston’s character’s catheter – but here, the overall tone leans a lot more toward the dramatic side, which makes those moments feel even more out of place than a more standard Hart movie. You have a hard time trying to figure out which parts of this film you’re meant to laugh at or take incredibly seriously, because the way it’s shot and how the music is playing tells us that it’s a dreary affair, but the script and parts of Hart’s delivery are telling us that it’s meant to be more light-hearted than that. This film’s tone is odd, in that regard, because you’re unsure of its overall intent since it’s throwing different things at you simultaneously and you, like the film, don’t know which one to focus more on.

It’s also one of those films that you can correctly predict from the moment it starts; the opening scene, which is of the two leads evading police cars in a chase, is revealed to be a flash-forward to later in the movie before it cuts back to six months earlier when the story properly begins, which right there is when the film shoots itself in the foot because everything that follows after in terms of dramatic twist or character revelation is undone because we now know what’s going to happen to them later on. Even the stuff that does follow on from that is all stuff you’ve seen before, the Odd Couple formula about two guys who at first don’t get along but soon become the best of friends, with revelation after revelation that continuously tests their friendship, leading up to a big climax (glimpsed at in the opening scene) that sees them coming back together again after a third-act break-up, if you will. It doesn’t do much with these tropes to set itself apart from movies that do them much better, and so it becomes less entertaining and more boring than anything because you’re counting down the moments until the next predictable moment. It’s unfortunate, because both Hart and Cranston do have good chemistry together, and they both do very well in the movie, but they’re both saddled with a script that has them playing out these ancient parts with not much that’s added to make them feel fresh and new.

As much as he really is trying in this, The Upside is yet another unfortunate misstep for Kevin Hart, especially at a time when he could really use a win after that whole Oscars debacle.

The Upside has good intentions, as well as a decent pairing of Kevin Hart and Bryan Cranston, but unfortunately they are both stuck with a script that uses several buddy movie clichés and doesn’t add anything of interest to make it a more entertaining watch.