The United States vs. Billie Holiday (Review) – A Jumbled and Inconsistent Biopic 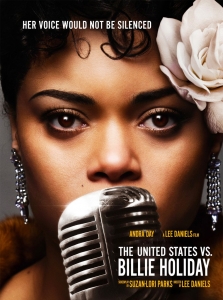 BASICALLY…: Singer Billie Holiday (Day) is frequently targeted by the Federal Department of Narcotics for her provocative music…

For his first feature in eight years, director Lee Daniels – previously an Oscar nominee for his work on Precious: Based on the Novel “Push” by Sapphire (to use its full, long-winded title) – certainly doesn’t return with light fare. With The United States vs. Billie Holiday, he attempts to document the later of the iconic black singer, and her unjust downfall caused by systemic racism in the American government, all with a noble sense of ambition and nobility.

Sadly, though, the ambition quickly runs dry as soon as you realise that the film, no matter how hard it appears to try, cannot escape its limiting biopic conventions, nor its questionable stylistic and narrative choices which distract way too heavily from what fans of Billie Holiday really want to see.

The crux of Daniels’ film follows Holiday (played by Grammy-nominated singer Andra Day in her film debut) at the height of her stardom throughout the 40s and 50s. She is also causing waves with her powerful anti-lynching anthem “Strange Fruit”, which is greatly upsetting ruthlessly racist government agent Harry Anslinger (Garret Hedlund), who along with the Federal Department of Narcotics launches a public tirade against her by arresting and imprisoning her for the possession and use of heroin, all under the pretence of her being a provocateur for the ongoing “war on drugs”. The government continues to make her life a living hell for years after, though she soon gains an ally in sympathetic federal agent Jimmy Fletcher (Trevante Rhodes), who himself feels marginalised by his fellow agents due to the colour of his skin, and they strike up a friendship even as the extremely troubled “Lady Day” dives deeper into drugs, abusive relationships and racial persecution.

There’s nothing to criticise about the level of ambition that Daniels and writer Suzan-Lori Parks are clearly trying to bring to life here, but the creative decision they have made to tell this story is unable to match their good intentions. Parks’ script is a narratively jumbled mess, cramming in so much information in such a stilted and direct manner that the emotional impact rarely lands, and giving few dimensions to some crucial characters who in real life appear to have served an impressionable purpose on Billie Holiday’s life, but here are presented as thin presences who rarely flex beyond their given personality attribute. Likewise, Daniels’ direction is all over the place; the filmmaker is clearly going for something stylish as he experiments with alternate aspect ratios, black-and-white photography, grainy overlays, sped-up footage and up-close documentary-style camera angles, but none of it is consistent and often comes in at random intervals. There appears to be no fluidity between these bizarre transitions, and they ironically call more attention to the thin narratives being spun here as Daniels’ visual aesthetic manages to add little more to what Parks’ script is trying to say.

The film’s one saving grace is, thankfully, Billie Holiday herself, and in particular Andra Day’s extremely committed and fearless performance. Beyond merely being able to replicate the singer’s unique raspy vocals almost flawlessly – her stage performances of Holiday’s most cherished hits, including the controversial “Strange Fruit” – Day is magnetic in a role that is, when you break it down, just as thinly written as most of the other characters, but the performance here is so good that it makes the character a lot more layered than it actually is. There are some truly haunting scenes in this movie, including ones that depict Holiday’s incessant heroin use which leaves her barely incoherent while slipping in and out of consciousness, all of which Day enlivens with a bold tenacity that is highly admirable, especially for someone who is by most accounts making her major acting debut.

Day’s performance is so good here that it almost leaves you sad that the material simply isn’t strong enough to support her mighty turn. It’s an unfortunate and all-too-common case in biopics (especially ones about musicians) where the lead actor is clearly giving it their all, but the material sticks too heavily to familiar tropes for it to really stand out, and you’re left with a good actor’s showcase rather than a genuinely compelling movie in its own right. The script is too conventional to be interesting, while the stylistic choices are too odd and inconsistent to feel natural or even warranted; for all of their ambition, the filmmakers unfortunately did not seem to put in as much time and effort as Day did into giving her breakthrough performance as the singer of the hour.

Between this and the recent documentary Billie, the latter is perhaps your stronger bet if you’re looking for your feature film fix of Billie Holiday, because it not only presents the singer’s life in a more profound and interesting way, but it also seems to be more confident in what it wants to say about her and other people that got mixed up in her life. Sadly, The United States vs. Billie Holiday doesn’t offer nearly as much insight, as it’s a blander and less focused piece of work that, despite its ambition, cannot string together all the right chords.

The United States vs. Billie Holiday is a messy and unfocused biopic that doesn’t just undermine the clear ambition by director Lee Daniels and writer Suzan-Lori Parks, which isn’t helped by their random stylistic choices and narratively jumbled scripts respectively, but also the genuinely fantastic lead performance of Andra Day as the titular singer, which belongs in better material than this.

The United States vs. Billie Holiday is now available on Sky Cinema and NOW TV.